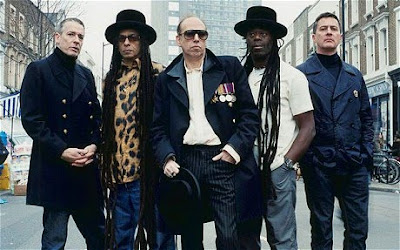 Phew, rock 'n' roll! Last Saturday was a busy day for me, gig-wise. I saw the reformed Big Audio Dynamite at the Bristol o2 Academy, as well as the mighty Chinese Burn rockin' the good ol' Gloucester Guildhall..... 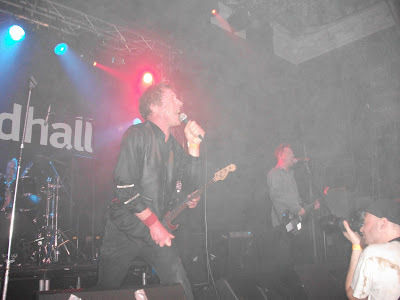 Here's the Burn on stage at the Guildhall's Punk All-Dayer, at the very un-rock 'n' roll time of 4:30 in the afternoon. My mate Glenn got me in on the guest-list, under the assumed identity of Lloyd something-or-other, which saved me forking out £22 to only see two bands out of the dozen or so playing. Cheers, Glenn! ( The headliners were those Oi! pensioners, the Cockney Rejects, who apparently were pretty awful and played to a half-empty hall. ) Following a very promising young band called Criminal Mind, Chinese Burn played a short, sharp set of their r 'n' b-flavoured, melodic Punk and then made a swift exit..... 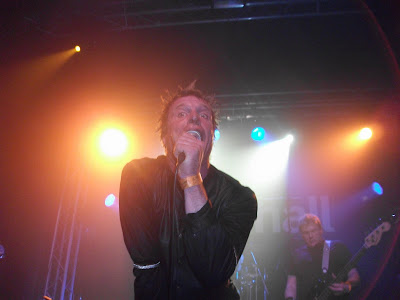 .....to the fabled backstage area.
And here's Glenn sampling the delights of the Guildhall's Green Room. Twixes, curries and pretzels all round! 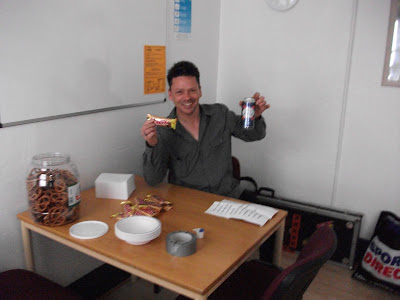 After shooting home for a quick change and a bite to eat, it was time to head down the M4 to Brizzul ( as the locals pronounce it ) for the last night of the BAD tour.

Big Audio Dynamite were a band that I always liked back in the late '80s / early '90s but had never seen live. Formed by ex-Clash man Mick Jones and film-maker/DJ Don Letts, they were never a massively successful band but had been ahead of their time with their eclectic mix of rock, Hip Hop and reggae and were one of the first mainstream rock acts to use sampling as a major part of their sound. Crucially, they were also multi-racial and often included lyrics about immigration and racism amongst their Spaghetti Western samples and Nic Roeg tributes..... 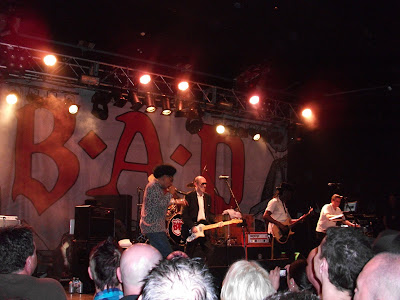 The ringing guitar riff of Medicine Show heralded the arrival of Jonesy and co. and the crowd immediately went into party mode, seemingly everyone there having a huge, can't-believe-it's-really-happening grin on their faces. And that goes for the band too..... 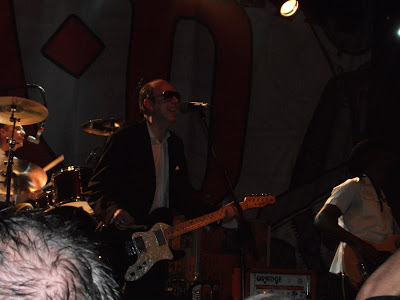 Great songs like C'Mon Every Beatbox and Limbo The Law were dusted down and reinvigorated, while lesser numbers like Just Play Music and BAD itself sounded far better in a live context, shorn of their '80s production sounds.

Mick poignantly told us that this venue ( which had been known as the Top Rank Club back in the day ) had been the site of his last UK gig with the Clash, and then he went on to play Sightsee MC, a song co-written with the late, great Joe Strummer. 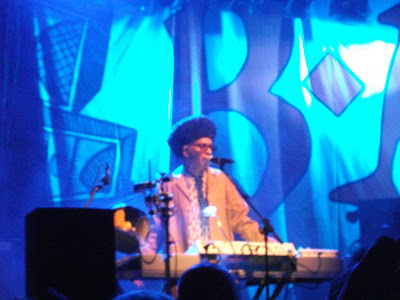 After much banter between Mick and the crowd, Don Letts running around the stage and rapping like a man half his age, and some more great music, the band finished with Rewind before returning with encores of E=MC2 ( huge cheers for that one! ) and Rush, with the appropriate lyric
" If I had my time again / I would do it all the same "
Nice one, Jonesy! Come back soon with your "brand new musical biscuit"!

back in the day, the guys from BAD used to be regulars in my local, the Oakley Arms, in London. they used to throw raves every other weekend, they even threw one in the cellar of the pub once. cracking good fun to be had by all. I remember, at the cellar one, me and me mate, Ram, sitting with Mick Jones, in the corner, the three of us incapable of uttering even a single word, just quaffing crap Mexican beer with fruit in it and rolling bifter after bifter, for hours on end. at some point, Mick mumbled something about not liking Jo Guest's hair, and then stumbled off in the general direction of the morning sun. & we never saw him again.

nice to know he made it home alright. . .

Sounds like a good time and now thanks to your review of the BAD show, I may take a detour from Linda Ronstadt and listen to the handful of BAD songs I've got. =)

That's a Hell of a detour! Hope you enjoy it, Mickey!