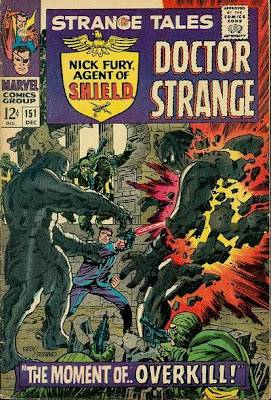 Well, I had to get there eventually: my favourite Jim Steranko strip - Nick Fury, Agent of SHIELD.
Steranko started work on the SHIELD strip with issue 151 of Strange Tales, over Jack Kirby's layouts, but The King soon moved on and Jaunty Jim took the strip to new heights of surreal, outlandish, spy-fi adventure.
But you knew that anyway. This is my history of the Steranko SHIELD..... 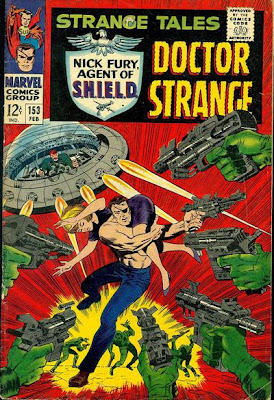 Nick Fury was a character that I'd seen popping up in different corners of the Marvel Universe in the early 1970s. ( This was the British Marvel Universe of black and white reprints. It differed from the original MU in many, subtle ways: lack of colour, words like "aluminium" spelt properly, Communist villains given new names and fictional homelands, things like that... )
Fury was, from what I could gather, a two-fisted, unshaven, eye-patch wearing superspy, who would appear in adventures of The Incredible Hulk or the Fantastic Four or Captain America, bark orders at people, wave guns around and then disappear again. I wasn't too impressed with him. 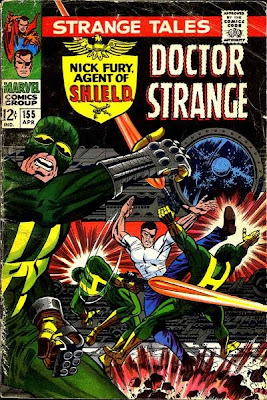 Later, due to the increasingly bizarre chronology of British Marvel reprints, Fury turned up in a solo strip in the equally bizarre "sideways" comic, The Titans. This was the Lee/Kirby Agent Of SHIELD, which introduced me to Hydra, the SHIELD Helicarrier, "Dum Dum" Dugan and co., and the whole Bond/UNCLE-influenced world of Marvel's superspy fraternity. This was all great fun with suitably explosive, gadget-packed artwork by The King and patriotic, corny dialogue by The Man. 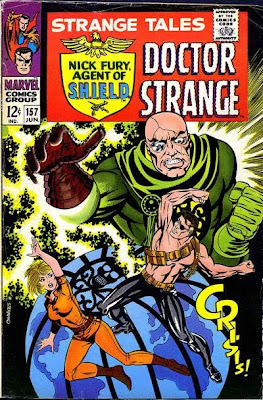 But then, towards the end of the strip's run in The Titans, a certain Mr. Steranko showed up. At first his style was constrained by the need to work over Kirby's layouts ( something Lee insisted on for certain artists, so they could pick up the Marvel way of working ) but he soon moved on to handling all the creative duties and the strip blossomed. A whirlwind of new concepts and characters were introduced:
Baron Von Strucker ( a new take on an old character ), Hydra's deadly Dreadnought, the Q-Ray, Hydra Island, Fury's nifty new jumpsuit, the Satan Claw ( see above )..... 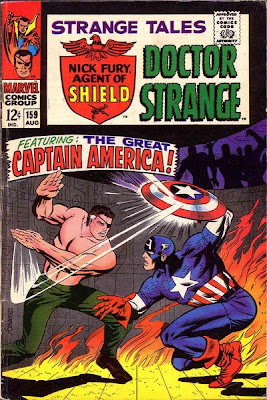 And, just when I thought things couldn't get any more exciting, Nick Fury was promoted from The Titans to the debut issue of the UK's own superhero, Captain Britain! And in full colour too!
Fresh from his defeat of the hordes of Hydra, Fury went back to "Spy School" where he met with superspy-babe the Contessa Valentina Allegro De Fontaine ( aka Val ) who promptly knocked him on his behind, and Captain America who embroiled Fury in a multi-issue struggle with the legions of the Yellow Claw. No rest for the wicked! 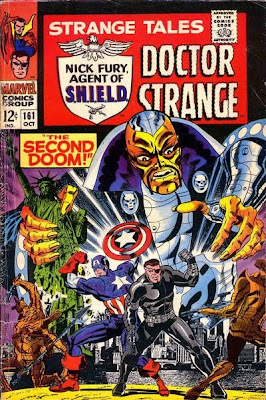 From this point on, the strip became even bolder and more dynamic. Steranko's panel layouts, use of colour, pacing, and op-art influences went stratospheric. Taking the best of Eisner, Krigstein and Kirby and fusing them with his own psychedelic effects, Steranko created a new approach to the character which really did live up to Stan Lee's aim to "out-Bond Bond and out-UNCLE UNCLE." 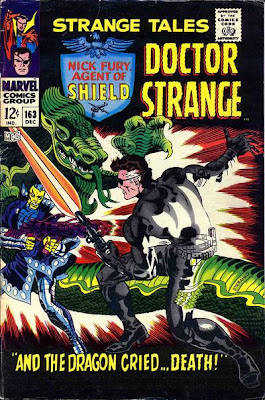 And this was probably the height of Steranko's narrative powers. Working to a strict, 10-page episode every month ( chopped in half in weekly instalments for the UK version ) he kept the storyline barrelling along without the self-indulgences of later work. 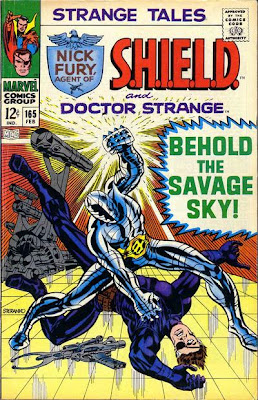 And, for a creator who is often criticised for weak characterisation, Steranko's cast of characters here are well-defined and distinctive. Fury himself finally gained a past as he mused on childhood days in Hell's Kitchen, or reminisced with Val about people they had lost in wars and spy-games. Val, Clay Quatermain, Laura Brown, "The Gaff", Gabe Jones, "Dum Dum", Jimmy Woo and Suwan all have their roles to play and often give the impression of having life outside those four-colour comic panels.
And, of course, some of them got to appear on an iconic cover..... 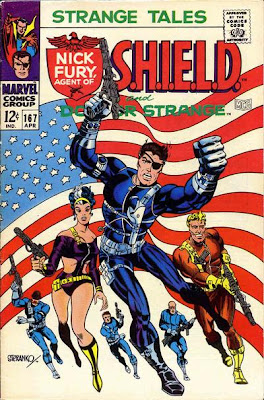 Back in the UK Marvelverse, the Captain Britain comic soon lost its expensive colour and became just another b&w mag before it limped on to its demise. Later SHIELD stories ( especially Dark Moon Rise, Hell Hound Kill! ) looked pretty good in monochrome, but I was glad to have read the indomitable SHIELD agent's struggle with the nefarious Yellow Claw in full Steranko-colour!
Of course, in later years, I bought the original version of Fury's adventures in yellowing old copies of Strange Tales - one of the best Silver Age titles, in my opinion, with its roll-call of such fantastic creators as Lee and Kirby, Ditko, Marie Severin, Bill Everett, Dan Adkins, John Buscema etc. etc. And a certain former escape-artist, magician and musician, James Steranko.
( I had intended to wrap up Steranko Saturdays by the end of 2010 but circumstances tripped me up, as usual. So, there will probably be just one more post to come of this irregular series and, if you didn't like this one, I'm afraid you won't like the next one either as it concentrates on Steranko's short-lived Agent Of SHIELD solo title. You have been warned..... )
Posted by cerebus660 at 16:37

Somehow I ended up with 2 copies of a certain issue of the CAPTAIN BRITAIN title here in the US in the late seventies and was able, at long last, to piece together Steranko's pioneering four-page spread with Fury fighting the Claw! Amazing stuff!

Lucky guy! I've just been re-reading my old issues of Strange Tales whilst writing this post, and drooling over that self-same artwork, wishing I had another copy. One day...

Ah, The Titans; it came out during a period when my comicbook reading had been seriously curtailed by circumstance. I used to turn up early for my paper-round just to flick through the Titans in the shop. Was there ever a dafter and yet more beguiling format?

The comic had been and gone before my comic-book buying ability had been restored. It was good to read of how you enjoyed the Fury material there-in and how it still inspires you. I am, I will admit, a little envious, for if I'd've spent a touch more time with that JS material at that most impressionable time of life, I might love it now rather than "just" admire it.

Still, I'm glad one of got to read those comics properly!

It really does make a difference at which age you encounter a comic strip. As with science fiction where, as we all know, the "Golden Age of SF" is 14 :-)

Because the British Marvel reprints came along at such a formative age, I've always been more of a fan of Marvel than DC or whatever. I was lucky enough to experience the Silver and Bronze Ages of Marvel simultaneously... which was nice.

But, The Titans... that was a weird little mag. All that lovely Kirby, Adams, Colan and Steranko artwork squashed into such a small space in the "landscape" format...

Thanks for commenting, Colin. It's good to see you here. Hope you're having a great New Year so far...