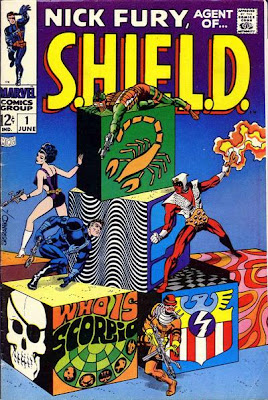 As this is the final Steranko Saturday, I'm going to leave you with a treat: all the covers and some interior pages from the Jaunty One's short 1968 run on Nick Fury, Agent Of SHIELD.
Issue One - "Who Is Scorpio?"
The first appearance of Fury's nemesis, the mysterious Scorpio. Behind a none-more-'60s cover, with its allusions to spy-games and intrigue, we find Steranko at the top of his game, producing dazzling artwork, like the following evocation of high speed and danger..... 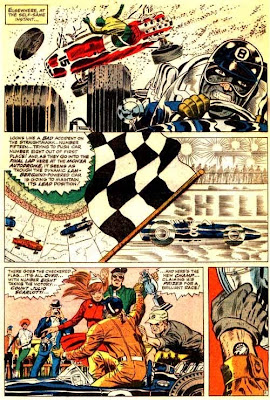 And this exciting, kinetic double-page splash, showing the "indestructible Nick Fury" facing down Scorpio for the first time..... 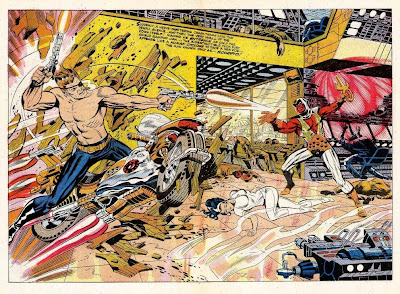 Issue Two: "So Shall Ye Reap... Death!"
The title sounds more like one of Stan Lee's than Steranko's, doesn't it? And, unfortunately, that's all I can say for issue 2, except for noting how Kirby-esque the villain looks on the cover, because it's the one Steranko Fury I've never read. ( Face goes red with embarrassment. A bit like Scorpio's. ) 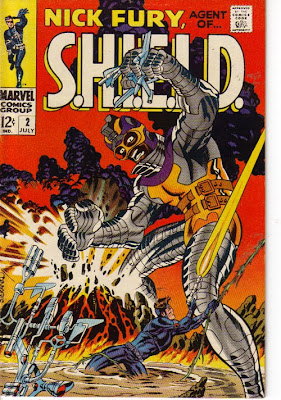 Issue Three: "Dark Moon Rise, Hell Hound Kill!"
Fury goes Gothic as he investigates a Baskerville-like curse in the Scottish Highlands. A totally unusual environment for our hard-bitten superspy, but a chance for Steranko to let rip with some creepy, atmospheric artwork. And what a beautiful cover! 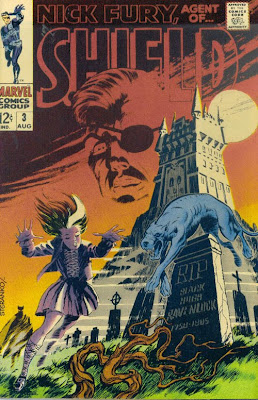 Unfortunately, this was the issue ( for me, anyway ) where Steranko's story-telling ability began to desert him. The plot is wrapped up hurriedly with some clumsy exposition, almost as though it was a two-part story that had been truncated, and Steranko commits the cardinal narrative sin of telling you what has happened instead of showing you. On the plus side, we do get some wonderful scenes like this blue-hued beauty: 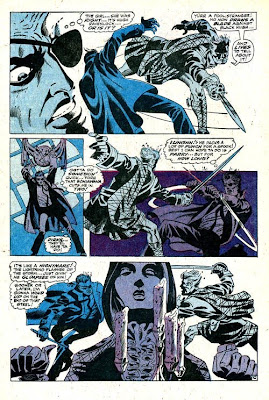 Issue Four: "And Now It Begins..."
It's the beginning of the end for Steranko's run on the Fury strip, as Roy Thomas and Frank Springer produce a fill-in issue, and a recap of SHIELD's origin story, at that! Even though it's competently done I wouldn't have been too impressed if I'd picked this up back in 1968, expecting more new and dizzying concepts and characters. Still, we do get this glorious, op-art cover..... 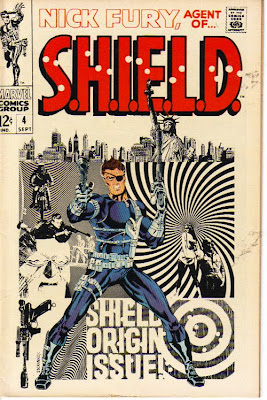 Issue Five: "Whatever Happened To Scorpio?"
A tour de force from the master, back on form after issue 3. Our SHIELD director once again confronts Scorpio who, seeking revenge, impersonates Fury and takes his place in the spy organisation to plot an elaborate death trap..... 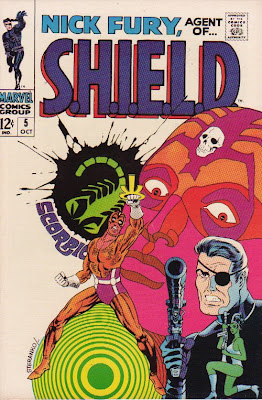 Steranko's artwork is at its most psychedelic here, especially when Scorpio is hunting Fury ( as seen below ) or when Nick is cast into the "room of a thousand and one traps" and must escape a surreal landscape of death. And the cover ( above! ) is a Bond-esque knockout! To counterbalance all this colour and spectacle there is a lovely domestic scene between Fury and Val, and a wistful final panel as Scorpio is seemingly consigned to a watery grave, while a haunted Nick Fury looks on pensively. Scorpio's identity is revealed to Fury, but not to the reader, so it will be many years before fans discover that Fury's greatest enemy is his own, embittered brother.
As you can probably tell I like this issue a lot :-)
Unfortunately, it turned out to be Steranko's swan song on the comic, but there were still a couple of covers to come..... 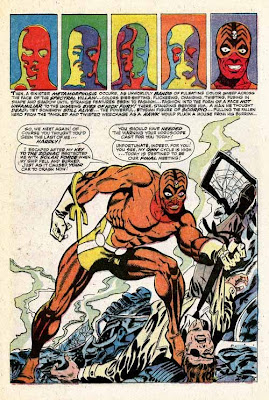 Issue Six - "Doom Must Fall!" by Thomas and Springer
The "spacesuit" cover, Steranko's wonderful homage to the late, great Wally Wood and his EC Comics work..... 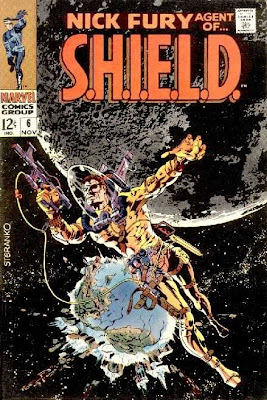 Issue Seven - "Hours Of Madness, Day Of Death" by Archie Goodwin and Frank Springer
The last of Steranko's covers for the regular SHIELD comic, although he did return for some reprint issues in later years. A creepily surreal illustration of Fury being chased through a Dali-esque landscape ( there's a lot of "-esque"s in this post! ) reminiscent of this page from Captain America no. 111. 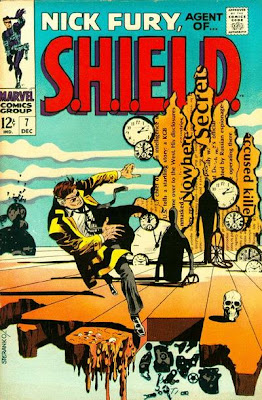 And that's it for these irregular Steranko Saturdays. I hope you enjoyed them but it's time for a change now. I'm sure some of the Jaunty One's work will appear on this ol' blog again at some point, but not for a while.
However, if you're still hungry for ground-breaking, psychedelic, pop-art goodness, check out some of these guys who have featured Steranko awesomeness too:
Joe Bloke
The Groovy Agent
Mister Door Tree
Tony Robertson
Sean Witzke and Matt Seneca
Heroes all! 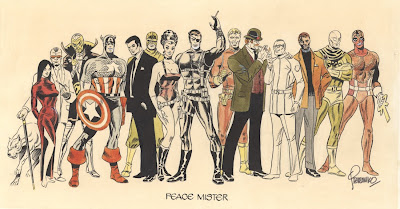 Imagine being five and a half years old and getting a copy of that utterly tripped-out issue five. Within six months I was wearing flared trousers, beads, granny glasses and a paisley shirt, trying to get my sideburns to grow. Coincidence? I think not.

Seriously, that comic grabbed me back then, but rereading it today I can't imagine how I could have made sense of it at the time. There's obviously a big difference between what a kid's mind is capable of processing and what well-intentioned but patronizing adults imagine a child can handle...and I've got the evidence in four colors right here.

Many thanks for all the fond memories these Steranko Saturdays have brought back!

These are terrific. I think I have found the 'Cave of Cool's covers of the week. Will give you full credit for posting them first. Great find.

That was great. Ah, I'll miss these. In fact, the first time I came to your blog was when I saw a link to one in someone's sidebar.

Hell, I suppose I could unfollow this blog now, except you'd probably write a really whiny entry about it...

@Richard - SHIELD 5 is definitely in my Top 10 comics of all time. Hmm, that's an idea for a post! I've got a fairly poor copy I bought when I was a teenager and another copy with a lovely, unfaded cover and white pages I couldn't resist buying about 10 years ago. Still can't part with the tatty old copy, though :-)

@Cal - No problem, mate. Just doing my bit to spread the Steranko gospel :-) And a mention at the Cave Of Cool would be... cool!

@Mark - You ol' charmer, you! Glad you enjoyed the Steranko Saturdays, but I think they've run their course, really. Gotta think of something to replace them with now...
Any suggestions?