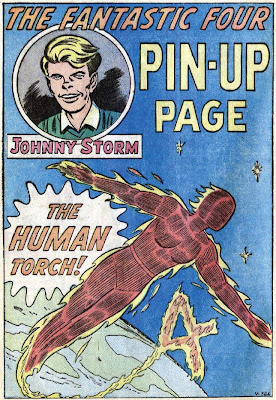 Isn't it amazing how, in this age of hyper-fast global communication and interaction, we can boil all our theories, thoughts and opinions down to two words:
something either "rocks" or "sucks".
The above Human Torch pin-up page, in all its joyous, Silver Age innocence clearly rocks...
Whilst ( and I'm obliged to yell SPOILER ALERT! at this point ) the following definitely sucks...
..... big time..... 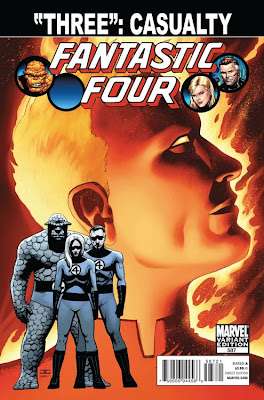 Yep, those lovely people at Marvel have decided in their wisdom that Johnny Storm must die and the Fantastic Four must become Three. All in the name of relevance, of course. Nothing to do with cheap sales gimmicks. Hell no.
FF writer Jonathan Hickman had this to say to Newsarama:

Hickman: I think the FF had a systematic problem in that some of the ideals the book represented, and the way they are portrayed by many, many writers and even in society, feel outdated and maybe overly simplistic. Our readers are smarter than they’ve ever been, they’ve read more pop culture and we consume so much entertainment. They’re just so much more sophisticated than they used to be, than any of us were when we were kids reading the book. Back in the day, you read “Days of Future Past” or something like that, it was so Earth-shattering that somebody wrote that story. Now if you do a time-travel story, people know all the intricacies of all the time–travel stories. It has to be so much more sophisticated. So the thematic stuff of the FF, it’s not outdated, but the presentation of it was. What we’re doing is inverting what they do on Mad Men, where they take a show about nostalgia and they inject modernity into it. We’re doing the opposite. We’re taking modernity and we’re injecting nostalgia into it, and then we’re going to stick all of that back inside the Marvel Universe, and therefore make it relevant.

It’s a bit of an experiment. I feel like it’s working, and we’ll see where we go from here. 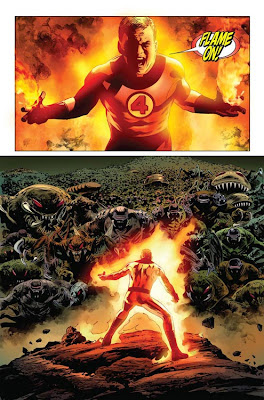 OK.
Personally, even though I'm sad to see him go, I'm looking forward to the inevitable return of the Human Torch as much as I would look forward to a napalm enema. Because I know it'll never be done as well as this:

On a totally different subject, something that Rocks!!
Big Audio Dynamite are reforming! 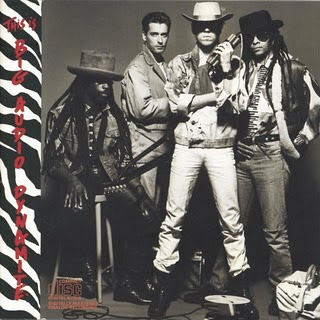 Mick Jones' post-Clash Rock/Hip Hop/Reggae outfit were one of my favourite bands of the '80s/'90s but I never got to see them live. Hopefully now I'll get that chance.
"Duck you suckers!"
Posted by cerebus660 at 21:26

Does this mean Carbon/Silicon are no more? I quite liked the theory of that band, if never really the practice.

I haven't read a copy of the Fantastic Four since 1992, so I can't claim the death of Johnny Storm impinges on me in any way shape or form but I do wish that when people are talking about a comic they're writing they'd at least try to make it sound like they're talking about something they have a vague interest in rather than a product they're looking for the best way to package.

@Mark
Carbon/Silicon's website says "Dates for 2011 will be confirmed in the New Year" but nothing else so far. So maybe they're still an ongoing concern, but obviously Mick's been busy of late, gigging with Gorillaz and putting BAD back together. I've seen C/S live a couple of times and, while they're no Clash ( who is? ) they were good fun and were obviously having a great time.

@Steve
The FF have always been my favourite Marvel characters so occasionally I'll check their comic out, normally when a major writer like Mark Waid or Mark Millar have been on board. But, yeah, this whole "Death Of The Torch" thing smacks of marketing-led desperation and, no matter what Marvel say, we al know the reset button will be pressed before long...

I love BAD's "The Globe" and "Rush," which were pretty big when I in college. Those are the only songs I know, so I may have to begin a BAD Renaissance here at Telstar, what with your news. =)

Hi Mickey, I'd recommend you check out the singles from their first album, Medicine Show, E=MC2 and The Bottom Line - classics!