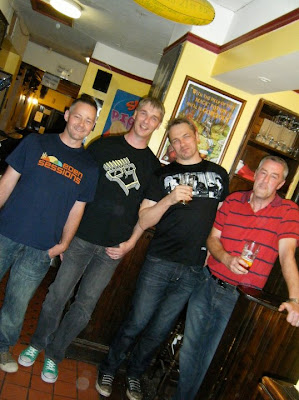 Last Saturday night Sarah and I hit the riot-torn streets of Gloucester ( it was pretty quiet, actually ) and headed for the glittering palace of rock 'n' roll delights known as The Pig Inn The City. The occasion was the 50th ( surely not! ) birthday party of legendary, ever-young DPC guitarist, Marky Muscles. As well as celebrating Mark's half-century ( again... surely not! ) we caught a couple of great Punk bands, Meat and Two Sick Monkeys ( coming to your town soon... ), and were there for the first, unofficial DPC reunion. Twenty-something years in the making :-)

It was lovely to catch up with the guys after such a loooooong time. Certain people have been suggesting to us that we reform, if for one gig only. It would definitely be fun... but is it likely? Don't know... ( and that's actually an old DPC song title... ) 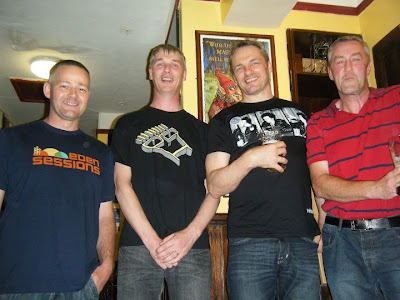 The above is the final lineup of the band formerly known as Primitive and later known as Three-Eyes McGurk and the Death Planet Commandos, or DPC to their friends and enemies. I keep threatening to write a more in-depth history of my time with the band... maybe some day soon... 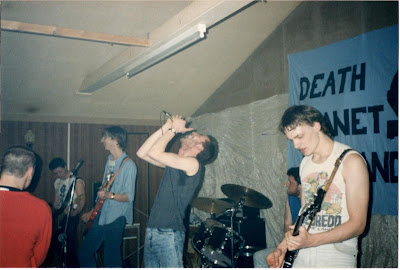 Anyway, here's the DPC back in the day. To be specific, March the 5th, 1988, Coney Hill Hospital Social Club. Coney Hill was a psychiatric hospital ( long gone now, of course ) and an unusual, but cool, venue for gigs. They often had country and western bands playing, so you would have to move hay bales around the stage to accomodate amps and speakers. This was only the third gig Paul and I had played with the band ( but we were rock stars already! ) and was a benefit for local Hunt Saboteurs - seems like a different world from this 21st century perspective... 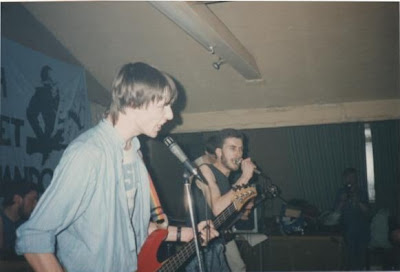 We played about 4 gigs at Coney Hill and they were always a good laugh - certainly better than the bloody awful Night Owl gig. We played with other long-forgotten local bands such as Walk The Plank, An Elegant Chaos, Decadence Within... 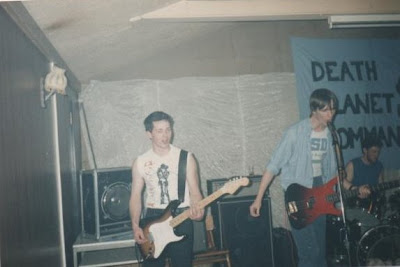 Here's me, posing for photos in my "Atomic Kiss" Watchmen T-Shirt... 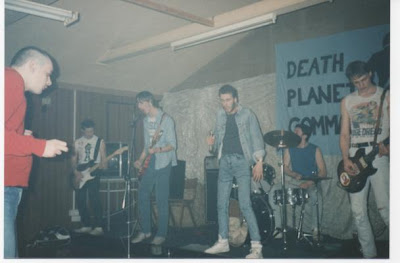 And, from left to right, a Coney Hill patient in red jumper and slippers ( seriously! ) who got up and danced and seemed to know all the words to our songs...
... me, Jon, Ade, Paul and Mark.

I had that same Watchmen t-shirt.
But I wasn't bad ass enough to rip the sleeves off...

@Joanne: I know! Have you ever seen such hard core Punk Rock action?
;-)

@Colin: It wasn't so much a case of ripping them off, more like asking my Mum to cut the sleeves off and then sew up the hems...
Still, I looked like a proper anarchist. With a ruined T-shirt...

I love these posts. And I swear in that one shot with the Watchmen shirt, you look like Joe Strummer (which I think I've remarked upon before).

Hi Mickey! Yes, you've mentioned that before and bless you for it! I know there's no way on Earth I ever looked as cool as Joe ( RIP ) but it's fun to pretend... if only for a moment...

Anybody who has never been in a band (and honestly I doubt DPC were ever as bad as Osmotic Damage (Chester 1974-78)really has no idea what fun is. Christ we were bad, even before punk made bad cool, but Friday nights in my mate's garage remain top memories. As for reunions, "a little voice inside my head says "Don't look back, never ever look back."" But what does Don Henley know?

Holy underwear, Batman! You never told me you used to be in a band! "Osmotic Damage" eh? That's a pretty cool name, actually. Prog Rock? Got any demo tapes?

And you're right: being in a band, no matter how bad, ( and we really weren't all that bad... I suppose ) can be Fun with a capital "F". I'll definitely have to write that Secret History Of The DPC.....

Remarkable, just stumbled on this. I was there at that gig in 1988. It seems as weird today as it did then that I went to a gig at the local asylum.

Thanks for commenting, Kirbs! It was certainly strange, but a lot of fun, playing at Coney Hill. It's sad today to see most of the former hospital grounds covered in housing estates...

I've just been checking out your blogs. Very interesting, especially the posts about your cycle rides around the Haresfield / Standish / Moreton Valence area - my old stomping grounds :-)