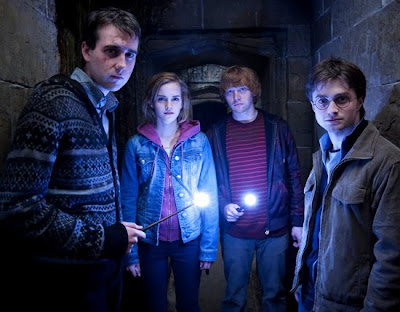 "It all ends..."
For us, Harry Potter's 8-movie-long battle against the forces of darkness ended at the Lighthouse Cinema in Newquay, a brand-new, state-of-the-art movie emporium just a few minutes' walk from the beach. What a cool place!
While we were enjoying sun, sea and sand, Harry wasn't having such a good time. His mentor, Dumbledore, was dead, his school was under attack by Voldemort's hellish legions and - worst of all - the Quidditch stadium was on fire. ( Shame! ) 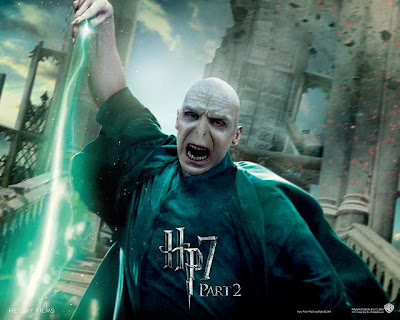 Unsurprisingly, this is the darkest HP movie of the series as our heroes make a last, desperate stand against the snake-headed He Who Must Not Be Named. In contrast to the previous film's glacial pace this last installment fairly zips along as Harry and his gang break into the dwarf-controlled Gringott's Bank, take a wild ride on a dragon's back, meet Dumbledore's cynical brother, confront new Headmaster Snape and finally fight the Battle Of Hogwarts, with some excursions into the spirit world thrown in for good measure. Phew! And then, after all the series' Quidditch matches and teenage angst, it all comes down to a bloody big battle between Death Eaters, giants and Dementors on one side, and schoolchildren and their teachers on the other. 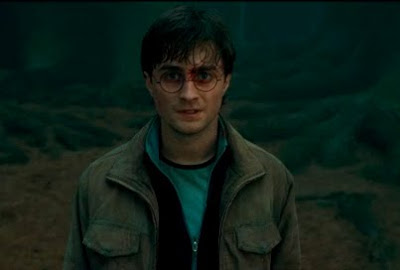 As usual with the HP franchise, my main criticism is poor or muddled ( Muggled? ) story-telling. Yet again, the Deathly Hallows themselves prove to be of little relevance to the plot, a key conversation between Harry and Malfoy's mum is botched, making little sense of later developments, and too many characters are killed off-screen in the final battle. On the plus side, the emotional pay-offs for the main characters work well, with Harry drawing strength from some supportive ghosts before his final battle, Ron and Hermione fully realising what they mean to each other, and even shy Neville getting his chance to shine as he defies Voldemort. The special effects are uniformly excellent, especially in the scenes of Voldemort's army assaulting the school en masse.
It will come as no surprise to anyone that ( SPOILERS! ) Harry wins out in the end and Voldemort dies, even though the cost is high for the Hogwarts survivors. We've come a long way with these characters over the 7 books and 8 films and this is a suitably epic finale but it's still anchored in the familiar themes of friendship, tolerance and courage that have run through the series. There's even a coda at the end, set 19 years later, that effectively brings the story full circle, taking us back to Platform 9 & 3/4 for another journey to Hogwarts.....
Soundtrack: Fuzzy Logic by Super Furry Animals
Posted by cerebus660 at 21:08

True... but how many of Batman's villains would last 10 minutes against Voldemort?

I still haven't watched Pt7 Pt 1 yet, must admit. I've got mixed feelings about Potter - thought the last four books were not great and the films have been a mixed bag - but there's no denying that Rowling's obviously got something. Kids reading more can never be a bad thing...

AS I said there, I never got any further with the books than Half-Blood Prince, which I found so tedious that I put away with the intention of finishing "some other time". Of course, that time still hasn't come :-)

But, having seen the end of the film series, I really think I ought to read the last book... when I've got 6 months to spare...