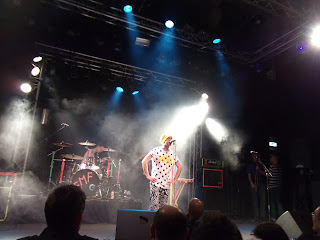 As promised I'm going to do a few quick reviews of some of the great gigs I've been to in the last 3 months or so but was too busy / lazy to blog about at the time. And, in my usual disorganised fashion, I'm going to do it all in reverse order :-) 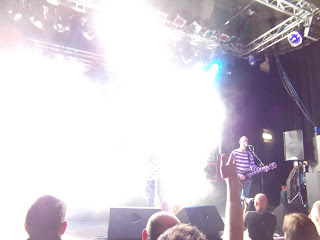 Let's start with the awesome EMF blowing up Gloucester's Guildhall Arts Centre a couple of weekends ago. I've submitted a review of this gig to Louder Than War but it hasn't been published yet, so here's a sneak peek:


It's a special night for revitalised indie-dance heroes EMF as the Forest Of Dean funkers return to their roots and play a homecoming gig at Gloucester's Guildhall Arts Centre. To celebrate the 20th anniversary of their second album, Stigma, EMF play that album in its entirety as well as its predecessor, Schubert Dip, in the venue where they filmed the Unbelievable video all those years ago. 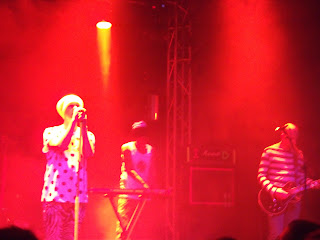 Bouncing onto the stage to the sounds of the Sesame Street theme like a bunch of school kids on alcopops, EMF are here to party like its 1991. And, in fact, singer James Atkin has that very date scrawled on his black and white-spotted T-shirt. They kick off with Schubert Dip Track One, Children, and the Guildhall goes absolutely nuts as the band proceed to rip through the album, song by song. The very epitome of the much-maligned '90s "indie-dance" scene, EMF show how to do it properly as they revisit their funky, punky whirl of sound, building up layers of guitars, keyboards and samples over a wicked backbeat and hitting us with anthemic chorus after anthemic chorus. By the mid-set high point that is I Believe / Unbelievable the band and the crowd are all grinning like mad men and women, gasping for air in the steaming hot venue, and still ready for more. Longtime EMF collaborator DJ Milf bounds onto the stage for a brief guest-spot before hurling himself into the audience, barely clearing the crowd barrier, before crashing to the sprung wooden floor of the former ballroom. Luckily he doesn't seem to be hurt... and confesses to me later that he only did it because "James told me to..." 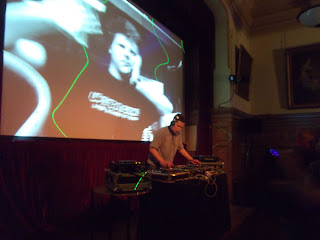 All too soon the first set is over, the band disappear backstage, and the audience move on to the Guildhall's plush cinema room where a recovered DJ Milf is spinning some classic indie choons. Soon enough the buzz of anticipation starts again and we all return to the main stage for the Stigma set. The "difficult" second album is a tougher, rockier affair that comes alive with the gritty, paranoid sound of They're Here and the hedonistic Arizona with its exhortations to "love your state of mind." Guitarist Ian Dench's fluid, often bluesy sound is more to the fore here as the band tear into the never-before-played-in-public Dog ( Primal Scream meets Iggy Pop ) and the singalong Getting Through. James is now wearing a 1992-logoed T-shirt but, just to prove we're in the 21st century, one fan in the front row is Skype-ing the gig to a friend in Australia, much to James' bemusement. He frequently says throughout the gig that he can't believe this is all happening... but it is, and it's obvious to everybody that the band are enjoying this special event as much as the fans. After set closer The Light That Burns Twice As Bright is poignantly dedicated to late bass player Zac Foley, the band return to encore with a fine new song, Elephant, and the inevitable EMF, their eponymous bad boy anthem, prompting James to ask "Does anyone take Ecstasy any more?" 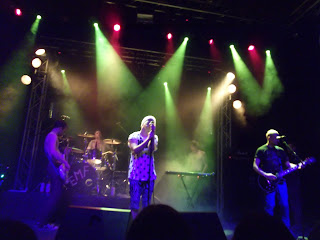 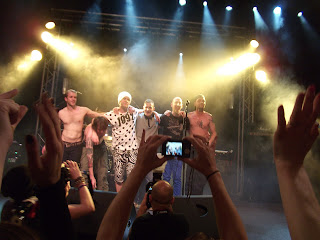 After giving the band a rapturous send-off we return to the cinema room for the after-show party, where old skool rave and Hip-Hop is being spun and cans of Red Stripe are being drunk, while James and Derry sign autographs and pose for photos with grateful fans. To state the bleedin' obvious, it's been an unbelievable night...

I was accompanied to this gig by my good friend and  Chinese Burn superstar, Glenn. We'd seen EMF on this very stage 10 years ago and, in fact, had joined the band for Unbelievable when the crowd decided to invade the stage. Good times. ( Security was a bit tighter this time... ) We'd often er, raved about how fantastic that gig had been and wondered if EMF would ever be that good again. I can confirm that that this time round they were even better and this was one of the best gigs I've ever been to in 30+ years of gig-going. ( On the day after my birthday, too. ) And it was all being filmed for a DVD, too. Should be interesting viewing...

Update: the review is now available here at Louder Than War. Cheers, Guy!
Posted by cerebus660 at 21:12