Doctor Who: The Snowmen ( Review with spoilers ) 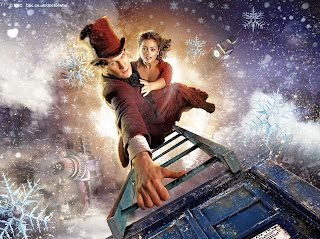 "The Doctor does not help people. Not anymore, not ever. He stands above this world and never interferes in the affairs of its inhabitants. He is not your salvation or your protector..."

Poor old, Doctor! After losing the Ponds to the Weeping Angel's temporal trap he's exiled himself to Victorian London, hung up the bow tie and become a sort of Time Lord Scrooge, parking the Tardis on top of a cloud (!) and withdrawing from a life of adventure. His only friends are lesbian lizard detective, Madam Vastra, her wife / surrogate Dr. Watson, Jenny, and mysteriously-reborn Sontaran, Strax. While they sleuth their way around London, apparently inspiring Conan Doyle's stories in The Strand magazine, The Doctor sits in his box and broods... 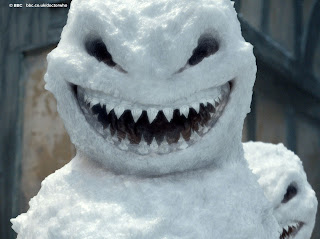 ...until ( you knew there was going to be an "until..." didn't you? ) he discovers the grim Doctor Simeon ( a stony-faced Richard E Grant ) and his army of ice, who have terrible plans for the human race. And just who is the mysterious Clara? The girl who, at first, seems to be a Cockney barmaid but is also somehow a prim and proper governess to two haunted children? Why does the Doctor feel they've met before? 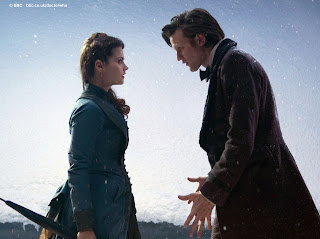 Although the Doctor himself is in a depressed mood at the start of this story, The Snowmen is a lot of festive fun, a flurry ( sorry! ) of running around, madcap humour  -  mostly at the expense of  "potato-dwarf" Strax  -  and the typically gorgeous BBC recreation of Victorian England we've come to expect from the show.( Most of it filmed in Bristol, just 30 miles down the road from where I sit typing these witless words. ) And then there's Clara... 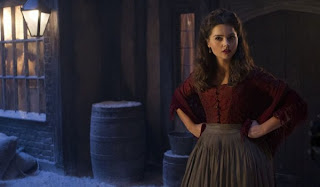 Jenna Louise Coleman is a delight as the perky, determined, fun-loving Clara  -  a woman able to cross the boundaries of the Victorian class hierarchy with impunity and also to deal with such futuristic concepts as telepathic snow, humanoid lizards, Humpty-Dumpty-headed aliens and deceptively-roomy blue boxes. It now seems apparent that there are multiple versions of Clara across time and space  -  the Doctor realises when this iteration of Clara ( SPOILERS! ) dies near the end of the episode that he has, impossibly, met her before in the Dalek Asylum, and we also briefly see a modern day Clara at the end of the episode. This mystery, as well as the Doctor's guilt at letting Victorian Clara down ( literally! ), is obviously the spark he needs to reawaken his passion for life and adventure, even more so than saving the world from Snowmen... 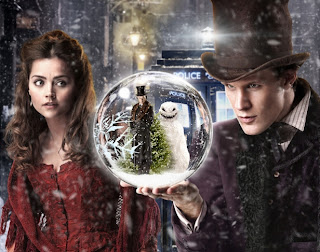 The villains themselves are probably the weakest link in the story. Yet again the production team seem uncertain about how to present a credible threat in a Christmas episode. While not as weak as last year's festive episode in the menace stakes, The Snowmen is a story which sorely under uses its titular monsters, apart from the Ice Governess character who is admittedly quite creepy. Even worse, Ian McKellen's voice-over cameo as the Great Intelligence ( oh, yes! ) is a wasted opportunity... unless it is set to be a recurring enemy, which is a nice thought but unlikely. The wonderful Richard E Grant fared better, coldly restrained as the villainous Doctor Simeon, but with some hidden sorrows revealed in his final scenes. I still wish he'd called the Doctor a "terrible c***" though, a la Withnail :-)

Where the episode did get it 100% right, however, was the introduction of the new companion to the Tardis. In a twist to the familiar scene, the Doctor and Clara ascended a dimensionally-transcendendant spiral staircase ( try saying that after a few whiskeys! ) to find the Tardis resting on a cloud, below glittering stars. A very magical scene, followed by Clara's first glimpse inside the blue box and the introduction of the new Tardis interior. As I've said here the retro stylings of Michael Pickwoad's new design seem like a step back after the funky, junky Control Rooms of recent years... but I think it will grow on me. It just needs a bit more clutter to feel authentic. Maybe a hat stand?
Similarly, the new title sequence is also something of a nod to the past, with its very colourful '70s "Time Tunnel" effect and the glimpse of Matt Smith's face appearing from clouds of stellar matter. It's a very traditional take on the Who titles and, contrary bugger that I am, I loved it!

The show seems to be gearing up nicely for its 50th anniversary year, with plenty of new trappings
( companion, Tardis, theme tune, titles ) but still with a definite sense of fidelity to its long history.
Bring on 2013!

I loved this episode too. I knew Jenna would be terrific when I saw how appealing and spunky she was in the latest Titanic mini-series.

When Jenna was asked what she'd bring to her part she said "fun"... which was good enough for me :-)
I think she'll give the show a whole new lease of life. Definitely looking forward to the new series in the Spring!