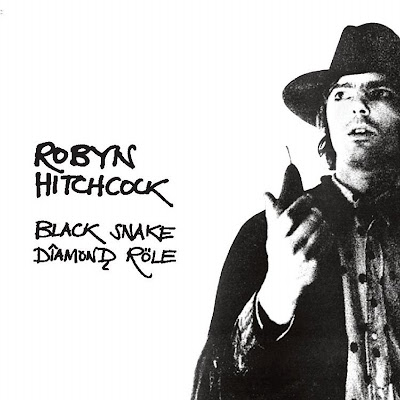 The return of Fave Gig Fri: a two-for-the-price-of-one special starring that archetypal English eccentric, Robyn Hitchcock. I'd first heard Mr. Hitchcock on Annie Nightingale's Radio 1 show, one night in the mid-'80s. The song, of course, was the immortal Brenda's Iron Sledge, a startlingly surreal excursion into Robyn's warped world-view, featuring bursting grasshoppers, iron pistons, icy slush, a possible Thatcher parody and the unforgettable lyric:
"All aboard Brenda's Iron Sledge
Please don't call me Reg
( It's Not My Name )"
OK, Hitchcock's Syd Barrett-esque fantasies can seem a bit contrived in a "I'm mad, me" kind of way, but I thought he was worth checking out. 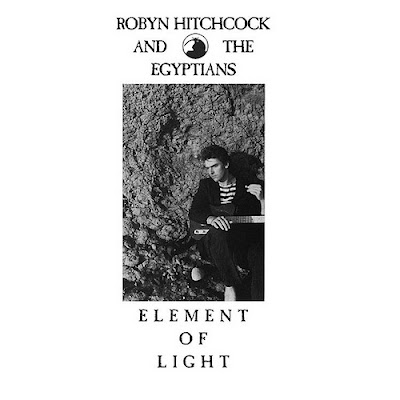 Robyn turned up at Cheltenham Town Hall in December '86 with his band The Egyptians. By this point I'd bought his Element Of Light album and loved it, so I dragged my mate Paul The Stick Insect ( future DPC drummer ) along with me to see The Man Who Invented Himself. The gig was compered by punk-poet John Cooper-Clarke, whose Mancunian accent was mostly incomprehensible to us yokels, and support came from Principle Connection ( fake jazz in berets ), the bloody awful Vibrators ( or The Vibrators From London as the leopard-skin-wearing throwbacks were billed ), and The Jazz Defektors, a pretty good soul/jazz/r 'n' b band, who at least livened the place up a bit.

The Egyptians appeared and, according to my diary from the time, "churned out a sound that space-warped from garage psychedelia to mutant folk to cabaret pop and back again." All the great songs from Element Of Light were present and correct and Robyn dug into his back catalogue for classics like Uncorrected Personality Traits ( acapella! ) and good ol' Brenda. He rambled on to great surreal effect between songs - God knows what it was all about, but I always remember him introducing one tune like this: "This is a song that was written long before most of you were born, and a long time after the rest of you were dead." Er, yeah..... 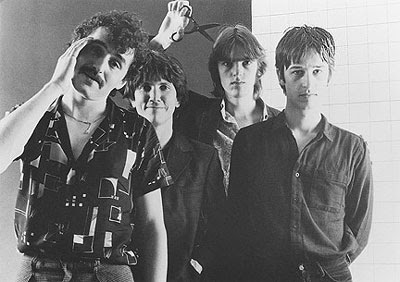 Of course, before his solo career, Robyn had been the main man in The Soft Boys along with future Katrina & The Waves guitarist, Kimberley Rew. The band's loopy psychedelia was either out of date or ahead of its time, but was definitely unfashionable in those post-Punk days, and they became a short-lived cult band with one near-hit, Only The Stones Remain, to their name.

The Soft Boys reformed a few times in the '90s and I went down to that there London town in '94 to see the band, with a workmate, Hippy Mark. We met up with some of Mark's family and friends, had a quick drink in a typically packed-out London pub and then went into The Astoria to see The Man With The Lightbulb Head and his mates. The old Astoria was a large, gone-to-seed venue with a Bloody Expensive bar, which kept me provided with medicinal brandy as I was fighting off a stinking cold. The Soft Boys came on to the strains of the instrumental Do The Chisel and proceeded to rip through such old faves ( or new ones, in my case ) as Underwater Moonlight, Old Pervert, The Queen Of Eyes and I Wanna Destroy You, all excellent. Although missing Kimberley Rew the band played well, without quite lapsing into muso-hell, and seemed to feature the late Andy Warhol on maracas (!) - strangely appropriate. Robyn kept the inter-song babbling to a minimum, but did encourage us to ring Cones Hotline for some reason, and explained that the band's name was a merger of Burroughs' The Soft Machine and Warhol's Chelsea Boys. Although we all bellowed for Brenda's Iron Sledge, they didn't play much of Robyn's solo material, but never mind, it was all good fun. 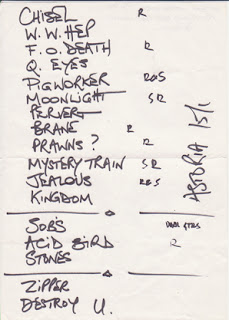 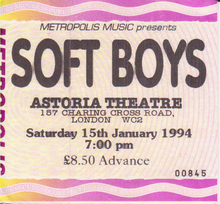 Check out Elektra's blog for some new Robyn Hitchcock music. Tell her cerebus660 sent you.

Soundtrack: Element Of Light and I Often Dream Of Trains by Robyn somebody.

So this was about 6 or 7 months before me and the Stick Insect signed up for our tour of duty with the DPC.

As Steven Wright used to say "It's a small world but I wouldn't want to paint it."

Good to hear from you, Mark. When are you gonna start blogging? Come on: you must have loads of rock 'n' roll tales to tell.....