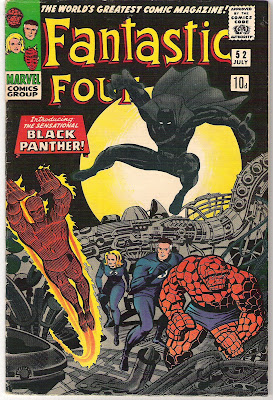 I've probably mentioned it before, but I'll say it again: the Lee / Kirby Fantastic Four is my all-time favourite comic book series. And FF no. 52, July 1966, "The Black Panther", is a particularly fine example of Stan 'n' Jack's brand of story-telling magic.
To start with, you get what I think is one of the best ever Kirby covers. The tension radiates off the page as Reed, Sue, Ben and Johnny navigate the maze of Kirby's techno-jungle. A hunter's moon illuminates the pouncing figure of the Black Panther as he strikes at his victims.
The story itself starts with an impressive, if slightly redundant, splash-page which repeats the cover image but with the emphasis on the Panther. The scene switches to the FF receiving an invitation from "an African chieftain, called... the Black Panther" to be his guests in the kingdom of Wakanda, where he will arrange the greatest hunt of all time in their honour. Reed's answer is "Well, we could use a vacation." Wrong! After stopping off to pick up Johnny and his mate Wyatt Wingfoot ( seriously! ) from college and a brief Inhumans sub-plot, the story proper kicks off as the FF land in Wakanda and are instantly attacked by the Black Panther. He tells them "'Twas I who invited you for the hunt! But, I neglected to tell you one thing... It is you who shall be hunted!" Cheers then!
The Panther lures the FF into his electronic jungle beneath the real jungle canopy of Wakanda, where he has traps galore waiting for them. At first things go the Panther's way as he divides and conquers the fabulous foursome, but then the overlooked Wyatt Wingfoot throws a spanner in the works and frees them to overcome their hunter. The story ends with the Panther unmasking and promising to explain his actions and his origins: "My tale is one of tragedy... and deadly revenge!"
Coming so soon after the Galactus / Silver Surfer trilogy in issues 48-50, this is a change of pace to a smaller scale story, but with plenty of action and intrigue. Who is the Black Panther? What is his motive for luring the FF to Wakanda? Did he really think he could beat them? It's a fascinating introduction to a classic Marvel character who's still going strong after all these years. Stan's dialogue is as portentous ( "Raise the totem! Let the ritual begin!" ) and as goofy ( "I'll itty bitty buddy you, you blue-eyed birdbrain!" ) as ever, and Jack's design sense goes wild in the Panther's "electric nightmare" of a man-made jungle. 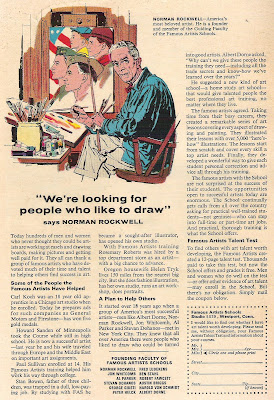 The issue concludes with the usual letters page, house ads, and the Marvel Bullpen Bulletins page. The main news item here is Steve Ditko's quitting of Marvel and the announcement of John Romita as his replacement on Spider-Man. As well as the front cover, I've also scanned the back cover ( above ) featuring the Famous Artists School advert which seemed to run forever in Marvel mags: "We're looking for people who like to draw" says Norman Rockwell.
Soundtrack: She Said and Stay Too Long by Plan B
Like A Hurricane by Neil Young
Posted by cerebus660 at 20:13