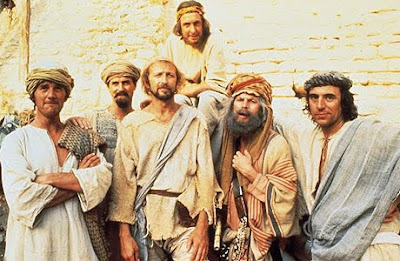 True story: When my cousin Jane got married, back in 1978, her and her new husband honeymooned in Tunisia. At some point, when they surfaced from the bridal suite, they were asked by an English film-production-type if they wanted to be extras in a movie that was filming nearby. They, of course, had better things to do and politely declined. It later turned out that this film was Monty Python's Life Of Brian, Python's most successful and controversial movie, and one that frequently tops Funniest Movie Of All-Time polls. Oops!
Life Of Brian is now their daughter's favourite film of all time, but she hasn't as yet convinced her parents to watch it.

I would be as gutted as a gutted person could possibly be. With extra helpings of gutted.

One positive outcome: it gave me something to blog about 32 years later when my enfeebled brain couldn't think of anything else to say :-)