I've just got back from my last gig of the year: another night with the mighty Chinese Burn! The venue was the Cafe Rene in glamorous Gloucester - a cosy, French-themed pub with friendly bar-staff and a decent jukebox. The Burn played two sets which went down well with the fairly small audience, the sound was surprisingly good, Ben's voice stayed in tune most of the time, and a good time was had by all. I made some new best friends in the shape of a couple of Cheltenham pissheads who bent my ear at great length about their lives, drinking habits, ex-wives etc. etc. All fascinating stuff :-)
Anyone interested in Chinese Burn's own brand of melodic Punk can look them up at:
http://www.myspace.com/chineseburntitanic 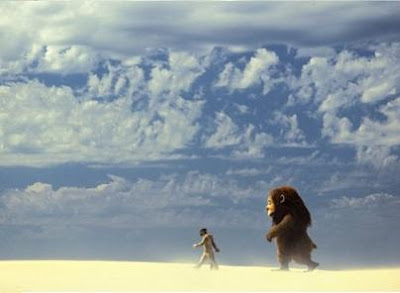 And yesterday we went to see our last movie of the year, Spike Jonze's adaptation of Where The Wild Things Are. The kids wanted to see the Jim Carrey version of A Christmas Carol but I convinced them to swap Victorian moral lessons for a boy in a wolf-suit and his feral friends.
It's a brave movie: not the usual, saccharine Disney fare with everything handed to the viewer on a plate. Instead you get the story of a literal wild-child ( Max Records ) who runs away from his single-parent mum ( after throwing a major tantrum which culminates in his biting her ) and finds himself in the land of the Wild Things. He becomes the creatures' king and joins in their mad, destructive games but also tries to keep the group of Wild Things together when their own childish mood-swings threaten to break up the group. The different Wild Things obviously represent different parts of Max's psyche - his loneliness, his anger, but also his caring side and creativity. Sarah found this a bit hard because it's close to the bone for us and our own wild-child, but that's another story.
Although light on plot, Where The Wild Things Are is a beautiful film: the creatures' island is bathed in Autumnal light, the seascapes and forests and deserts contrast well with the suburbs of Max's home, and the Wild Things themselves are a triumph of integrated costumes and CGI - you believe them to be real. This realistic approach to fantasy is what makes the movie stand out for me. From Max Records' wonderfully naturalistic performance to the pathos of the Wild Things' personalities, nothing seems contrived. This isn't just a film about children, or starring children - it's a film about what it's like to be a child, with all the joys and frustrations that entails.
Posted by cerebus660 at 23:55

I'm wishing you and your family a very Happy New Year.

Thanks, Momo! And a Happy New Year to you and yours.