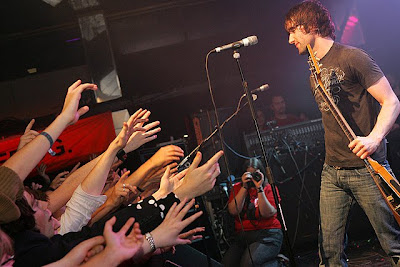 Last Tuesday night, Gloucester Guildhall, Ash: what a great gig! Instantly pushing past the queue and into the Fave Gig Fri front row. I don't know why I've never seen Ash live before, but as they were playing our local rock 'n' roll mecca, Glenn and I just had to get our asses down there to see Northern Ireland's finest do their thing.

This was the 7th gig of their A-Z Tour, a series of shows taking an alphabetical route through some of the UK's smaller venues, hence Gloucester Guildhall rather than Birmingham NEC or some other soulless cowshed.

Support band the Panama Kings were uninspiring: they had the sound, the ability and the attitude but ( for me anyway ) not the songs nor memorable tunes. Ash, however had the lot, except for one thing I'll mention later..... 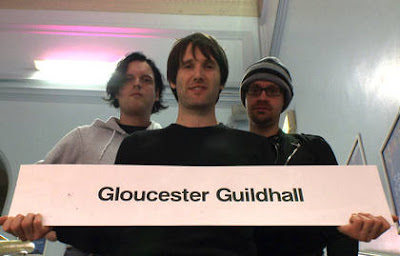 Following in the tradition of Blondie or The Buzzcocks or The Jam ( yeah, I know, very dated references ), Ash are a brilliant singles band, banging out great song after great song. ( They've actually announced that they won't make any more albums, because less and less people buy music that way, and will only release singles from now on. To coincide with this tour they're putting out 26 singles in a year, 1 every 2 weeks. )
And they fired out most of these great songs on Tuesday night: from early classics like Kung Fu and Girl From Mars ( both played at Ramones-like tempos ) through big hits such as Shining Light, and on to future favourites like Joy Kicks Darkness ( a cracking new song! ), they played a blinder with not a dull moment in the set. And the band obviously enjoyed it as much as the crowd, Tim Wheeler especially having a great time, grinning from ear to ear and charging around the stage like the teenager he was when he formed the band. ( He's now at the advanced age of - gulp! - 32. ) They finished with a fantastic Burn Baby Burn and a funky Return Of White Rabbit, an epic new song that stands tall amongst their older classics. I'll definitely have to see 'em again for more top tunes and Flying-V action! 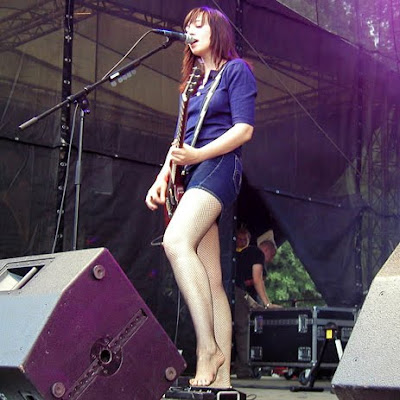 Oh yeah ( cue for a song? ), my one regret is that I never saw the band when Charlotte Hatherley played second guitar for them. She's a damn good singer and songwriter with her own solo career on the go. And she's a babe.
Posted by cerebus660 at 23:39

Ah, Ash, As you say, a great singles band. I was a teenager and had just got into music when Britpop exploded so I've got a lot of memories of bands like ash.

Did you see any of the ( so-called ) Britpop bands live back in the day? There was a lot of crap about then, but also some quality bands like Blur, Pulp, Elastica, Echobelly...

I haven't seen any of those you mentioned, but my very first gig was menswear! Remember them?

I've seen so many bands I can't remember them all..but in the 94 to 97 era I saw terrorvision, the manics (who I love, even the crap stuff, but I am your archetypal manics fan), reef, the wildhearts (do you know them? if you don't you need to check them out), audioweb, mansun, dust junkys, boo radleys, sfa (many times), kenickie, geneva, as well as metal stuff like soulfy.
If you do posts on anyone I've seen I'll be sure to chime in!