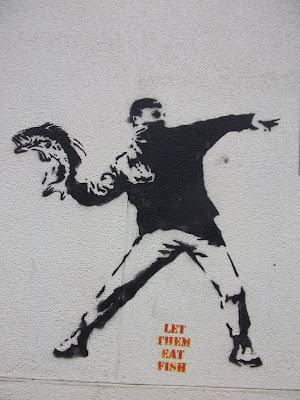 I'd expect to find street art in big cities like London or Bristol ( the home of the mysterious, controversial Banksy ) but sometimes you can run across some examples in the most unusual spots. The witty piece above is actually stencilled on the wall of Brixham fish market  -  "Let them eat fish" indeed! Clearly based on one of Banksy's most famous pieces, it may not be the work of the great man himself... but it's pretty cool. 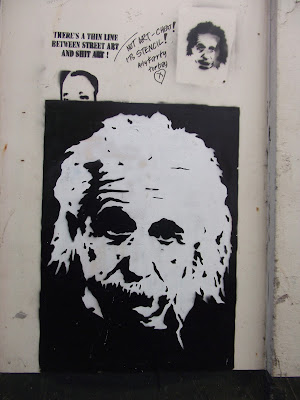 The above ( also from Brixham ) seems to be a debate on the age-old "What is Art?" question  -  "There's a thin line between street art and shit art!" 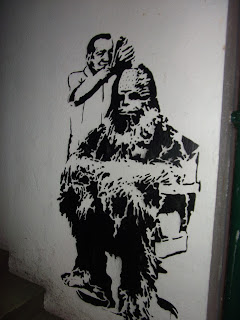 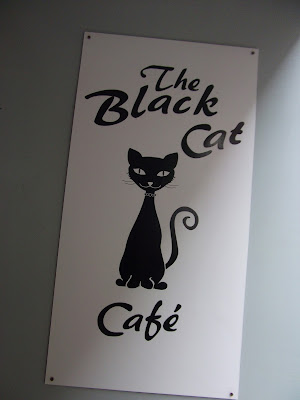 The pic above obviously doesn't count as street art... but I just like it. It's from a tiny vegetarian cafe down a Brixham back alley. Where else would you find an alley cat? 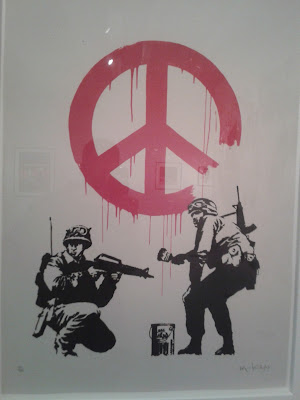 The last two images are actually by Banksy himself. Whilst in Coventry on Thursday and Friday for the Springsteen gig ( review to follow, of course ) Sarah and I had a look around the city's Herbert Art Gallery. The Banksy pieces were part of an exhibition called Caught In The Crossfire: Artistic Responses To Conflict, Peace And Reconciliation. Sounds heavy, doesn't it? Well, er, it was. But there was some powerful artwork on display and it was worth a look... even if it wasn't exactly fun. 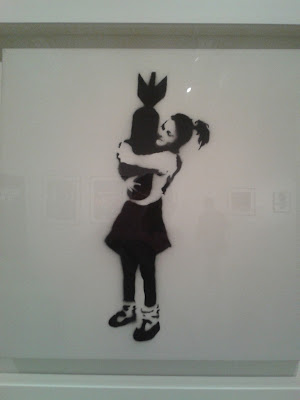 If you look hard enough you can find art everywhere.

It's always good to be confronted by some cool artwork when you least expect it.

I enjoyed seeing this stuff. Not much graffiti (good, bad, or otherwise) here in South Dakota, but just today my brother and I were driving past a parked train and whenever I see them, I always have to take a moment and admire the artwork somebody put on all the cars with a spraycan. I've never seen anything vulgar or offensive (which puzzles me) but I have seen words, names and even pictures done in a way that have a strange sort of beauty, I guess.
It's always striking to see art juxtaposed against something heavy and industrial. I like it.

I recently went to London by train and also saw a lot of graffiti sprayed on the trains, bridges etc. I was quite amazed to see how some of these artists must go to extreme lengths to get their art onto such inaccessible "canvases". And, as you say, that kind of street art can certainly brighten up some ugly concrete landscapes...

Hello to Cerebus. I wish you wouldn't mention London, because, I spent some time there as a soldier on leave, and, let's face it, once you've been to London, everything else is anticlimactic. I miss England.
So, hello to my friends across the pond, hope to visit your country again, some day. Best wishes.

I do love London. We spent a day there back in April and had a great time, doing all the usual tourist stuff :-)

I hope you do manage to make it back over to the UK sometime. Although us Brits do have a tendency to moan about this country, it's got a lot to offer and it sometimes takes a visitor's perspective to remind us...