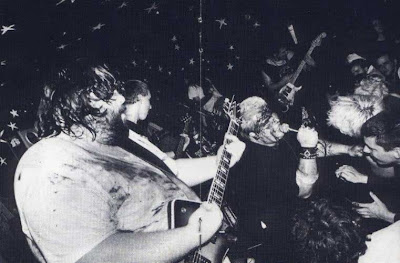 So, here's a band I only ever saw once ( at TJ's, Newport ) and whose records I've never owned, but they still make it into the ranks of Fave Gig Fri. The mighty ( and physically massive ) Poison Idea, a hardcore band from Portland, Oregon, whose late guitarist pictured above went by the delightful nom de rock of Pig Champion. They played the kind of loud, aggressive hardcore/metal that really only works in a live gig situation.....
As a special treat/torture I'm going to quote my gig review from my diary for July 1991 - yep, long before t'internet all we had was pen and paper to record our twisted thoughts; how prehistoric! Let the quotation commence, with 2009 comments in italics:
"Poison Idea lumbered onto stage: probably the most hideously obese Americans ever to thrash guitars and roar drunkenly on stage. ( Nice repetition of the word 'stage' ) Despite their whale-like bulks ( sensitive! ) they played blindingly fast and f***ing LOUD. The crowd went, as they say, wild. I went down the front, with Mark and Jon, which turned out to be a bad decision when someone accidentally smacked me in the face and cut my cheek.
( Poor baby! ) It didn't seem like much at the time, but when I got home and looked in a mirror, I realised I had quite a good cut - and it's still visible now. ( This was written 4 months after the gig for reasons of pure laziness ) Wow, rock 'n' roll, eh? Poison Idea were actually very good ( Don't hold back with the praise! ) and made it all worthwhile, even though their set fell apart at the end as the singer 'escorted' a too-abusive member of the audience outside for a little chat. Got home late, crashed out, thud!"
I was obviously more concerned with recording a very minor injury than talking about the actual music. That could be why I never ended up writing for the NME.
Soundtrack:The Badge by Poison Idea ( via the miracle of YouTube )
Posted by cerebus660 at 23:45

Is the scar still visible?

Sometimes in a certain light, at a certain angle, I can still make it out.
It's not like I'm the Phantom Of The Opera or anything!

tbh, writing about the cut or the fight would seem to make you an ideal candidate for an NME journo.

They did write a lot of crap sometimes.

This is actually a pretty great post, I love the fact that you take the piss out of your younger self. Funny stuff. I dread to think what I was writing 20-25 years ago. Probably rubbish poetry starting with the line "why do pretty girls never fancy me..."

That poem does sound strangely familiar...