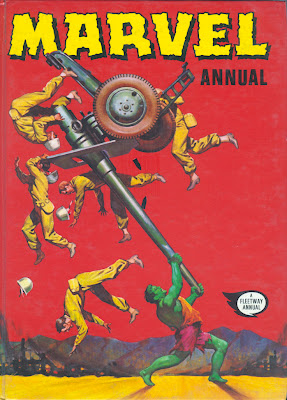 A bit of an oddity, this one: a Marvel annual produced by former UK magazine and comic publishers Fleetway. There is a "Copyright IPC Magazines Ltd., 1972" notice on the inside front cover, so it seems likely to me that the annual was published after the demise of Odham's Power Comics but before Marvel UK debuted with Mighty World Of Marvel no. 1.
I've had this book since I was very young and have always loved the cover painting of a happy-looking Hulk having a little disagreement with some soldiers and their big gun. No idea who the artist is but the realistic figure-work is very much in the tradition of UK war comics of the time. Superheroes were minorities in Brit comics back then so, I suppose, it made commercial sense to give the impression of a war comic which just happened to feature a green-skinned monster.
Hulk smash genres!!
Posted by cerebus660 at 01:48

wow that's a cool cover. has a sort of Norman Rockwell feel.

Nice isn't it?
The interior is mostly b&w Silver Age Marvel reprints: Hulk, Spidey, FF, Conan. Also a couple of text pieces, written in a sort of Stan Lee meets Walt Disney style: "Step up the Hill of Adventure and meet the folks who live in Marvel Land..."

I've still got my copy, although it's in a bit of a state, with half the pages coloured in with felt tip pen. The depressing thing is I coloured them in when I was fifteen. Immature, me?