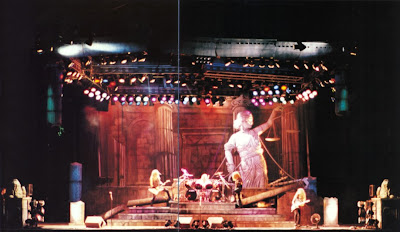 OK, this week I'm growing my hair, splashing on some patchouli, wearing my leather jacket no matter how hot it gets, and turning this motherhumper up to 11, 'cos it's Metallica time!! 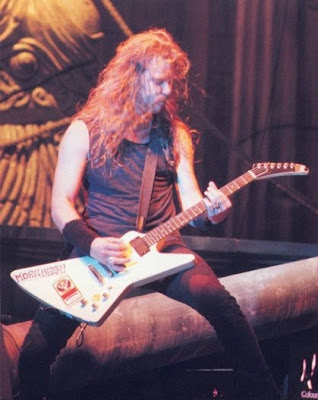 To be more precise it's September 1988 at Newport Centre, the Damaged Justice tour. I'm there with Mark, Jon, Matthew and Steve ( where are all those guys nowadays? ), we've just missed support band Danzig but we're not too bothered 'cos Metallica hit the stage just as we walk into the venue, and EXPLODE into first song Blackened. Riffs, drums, screams, strobes, volume! Before we know it the song's over, a few choice f-words from James Hetfield and we're on to For Whom The Bell Tolls, our eardrums destroyed already.
And that's the way it goes, one mighty slab of sound after another crashing down on our heads, beating us into submission. To be honest, I could do without the bass solo ( a way of apologising to Jason for mixing his bass so low on the album? ) and Kirk's Hendrix tribute, the kind of self-indulgence I thought "thrash" metal had left behind. But who cares anyway? Metallica steamroller their way through classics like Harvester Of Sorrow, Creeping Death, One ( the strobes! the helicopters! ) and Last Caress ( yay! ) until the inevitable occurs: with a blinding flash their Halls of Justice stage set crashes to earth in a completely Spinal Tap, none-more-metal kind of way. It's ridiculous and perfect at the same time. A final encore of Whiplash and the band are gone, taking our hearing and sanity with them.....
Soundtrack: Last Caress, Helpless, Crash Course In Brain Surgery, For Whom The Bell Tolls and other sweet love songs by the mighty Metallica.
Posted by cerebus660 at 19:23

i saw a show from this tour too. say what you will about the guys these days (i pretty much hated st anger and thought the last record was well ... blah.) but that show kicked my 15 year old ass.

good review. and when the stage fell apart at the end so did i.

Thanks for the comment, mate.
I only really like Metallica's stuff up to the Black Album, I think they lost it after that. Death Magnetic wasn't too bad, but seemed a pale reflection of earlier glories.

I saw this tour at what was then Hammersmith Odeon, and apart from the bass solo, drum solo and Tap-like statue it was indeed, one of the great gigs. And I agree after Master Of Puppets and bits of The Black Album, it all went rapidly downhill. I was doing a strip for Classic Rock magazine at the time of St.Anger, and I remember the editor phoning to tell me I was doing Metallica that issue, and how godawful that album was. And she was right!

I've seen Metallica twice. The first tiem was at Reading festival in 97 or 98, and I must admin I left fairly soon into the set to go watch Bis, who were awesome.

The second time I was at Werchter festival in Belgium in 2003. They were fantastic. The stage show included columns of flame. My friends ahd wandered off by this point so I was watching them by myself, moshing rather hard (I had waist length hair at the time) and getting comments from the Belgiums around me. Unfortunately as I don't speak Flemish and they didn't speak English I had no idea what they were saying. But I think everyone agreed the gig was ace. I certainly didn't skip out to see any other bands that time.

Metallica and Bis?! That's some combination!
Sounds cool 'though...

The night before this gig, James & Lars visited Metro nightclub on Stow Hill. It was Rock night and someone's band was playing (can't remember who). I think they immediately regretted coming in as they were practically mobbed at the bar by us Valley boys. We got autographs etc and at one point I was in a James Hetfield headlock! Great times, sadly before the now obligatory smartphone selfies. 🤘