Harry Potter And The Deathly Hallows Part One 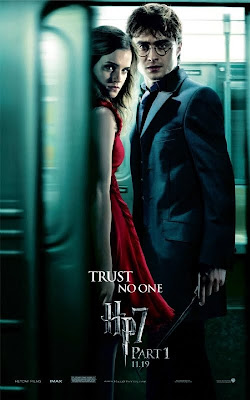 ".....And this year's Twilight Award for Moping About In The Woods goes to.....
Harry Potter And The Deathly Hallows Part One, otherwise known as Harry Potter And The Quest For Center Parcs."
It's been an oft-quoted publicity cliche that each Harry Potter film is "darker" than the one before, and with this penultimate movie they ain't kidding! The story follows on directly from The Half-Blood Prince, with no recap, and finds our heroes in dire straits, with Dumbledore dead, the good guys on the run and Voldemort's minions taking control of the Ministry Of Magic. As well as thematically, the film's also visually dark and cold, with scene after scene set in bleak, grey landscapes or darkened rooms. Harry, Hermione and Ron find themselves alone and unaided in a seemingly-impossible quest, whilst beset at all times by enemies and traitors, as well as their own fears and frustrations. So we're a long way from the cosy Hogwarts days of Quidditch, inter-House rivalries and butterbeer..... 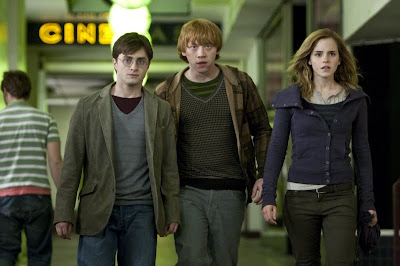 We've heard time and again that the reason for splitting JK Rowling's last HP book into 2 films is that there is so much important plot to get through, and not because of, you know, greed or anything. But in this movie we get a situation where new characters are briefly introduced and/or mentioned without much development or explanation ( Mundungus Fletcher, Bathilda Bagshot, Gellert Grindelwald ) whilst an unequal amount of time is spent on the three main characters hanging around woods, looking miserable, as if they're auditioning for the Cullen family. The "Deathly Hallows" themselves get a cool animated origin story but their significance is skimmed over. 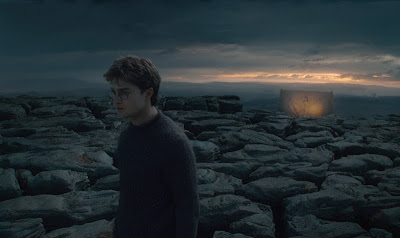 But I don't want to be too down on the film. There are some exciting set-pieces, like Harry and the gang infiltrating the Ministry Of Magic ( again! ) before fighting their way back out, and some kinetic chase-scenes through those old dark woods. For all the film's gloom, the locations are often stunning - beaches, moors and lakes all combining to dwarf the lost young wizards as their quest seems more and more hopeless. And the trio of Daniel Radcliffe, Emma Watson and Rupert Grint have now suitably matured as actors to carry the film's longeurs without the aid of paternal figures like Michael Gambon or Gary Oldman.
Although I'm slightly worried that the pacing of Part One means that the final movie will be one big rush to the finish line, I'll still be there for young Mr. Potter. I think he'll need all the help he can get.....
Soundtrack: The Recluse / She Said / Stay Too Long by Plan B
Posted by cerebus660 at 00:36

The extended camping interlude dragged in the book, I'm surprised they've bothered keeping it in the film. Still, to pad it out to 2 films, they can afford to be faithful this time, unlike the often-misfiring plot editing of the last couple.

I thought Order Of The Phoenix ( the film ) definitely suffered from that plot editing, but the film version of Half-Blood Prince was better than the book - all that teenage angst got very tedious. ( In fact I gave up on HBP about half way through, something I normally refuse to do. It seems Ms. Rowling has contracted Stephen-King-itis and prefers to use 10 words when only 2 are needed. )