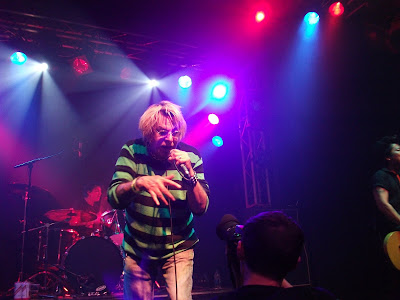 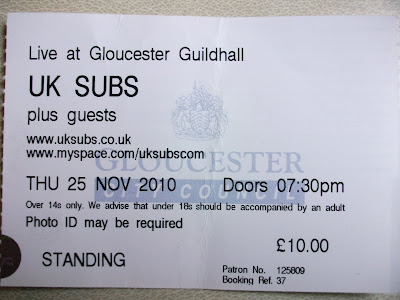 On a freezing cold Thursday night the UK Subs brought their old school Punk/r 'n' b/noise to Gloucester ( non-Hitsville UK ) and ruined the hearing of an appreciative Guildhall audience.
I've never been the biggest Subs fan - I used to have their first album, Another Kind Of Blues, but flogged it years ago, and now only possess a few of their old singles. But I saw them a couple of years ago at the same venue and they were much better than I'd expected, so I had to go back for more. I went with Chinese Burn star Glenn and also caught up with a couple of other old friends, the mighty Mark ( ex-Death Planet Commando ) and ace trombone-player ( really! ) Caz. 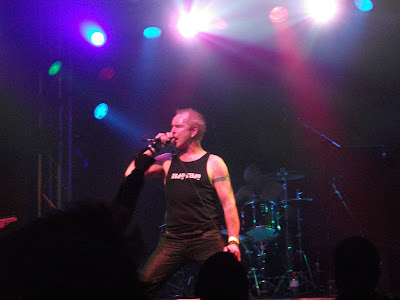 We missed the first band, who went by the delightful name of Joe & The Sluts, but caught Gloucester's Street Punk kings the Noise Agents ( frontman Andy above ). The Agents rose from the ashes of legendary local band Demob and play the same brand of shouty, '80s-style Oi!
It's the kind of music I would have enjoyed a lot more when I was 14 or so and into bands like the Angelic Upstarts, Cockney Rejects, Blitz and the lovely 4-Skins. It's a determinedly angry, aggressive and ugly style of music, all sledgehammer riffs and shouted slogans. So, it was perfect as a means of teenage rebellion, especially when it was almost universally reviled by the media taste-makers and trendies. Unfortunately, it doesn't strike the same chord for a forty-something. Well, not this forty-something, anyway. But, to be fair, the Noise Agents are good at what they do, have a few decent tunes struggling to break free, and main man Andy is a dynamic, committed frontman, all clenched fists and bulging veins. 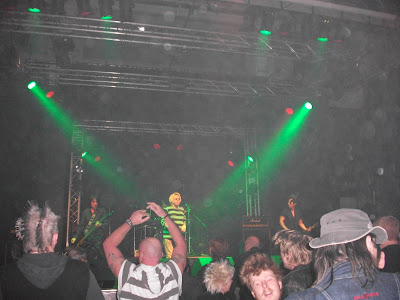 The Subs themselves came on to a rapturous reception from Punks of a certain age and one or two young 'uns. It's hard to believe that frontman Charlie Harper, who has led the band since they formed in 1976, is 66 years old - he's just as commanding and up-for-it as many singers half his age, and actually has a pretty good singing voice when he reigns in the shouting. The band were very tight and together, and clearly enjoyed themselves. The sound was excellent, clear and loud, something which the Guildhall crew has got much better at over the years.
The Subs played a number of new songs which, although very much in the style of their old material, showed that they're not just a nostalgia band. But, really, we were there for the old stuff..... and we got it: Warhead, Stranglehold, Tomorrow's Girls, New York State Police, CID, all perfect 3-minute blasts of Punk designed to make you hurtle about and crash into people on the dancefloor. As ever it was all good-natured rough-and-tumble, with no-one getting hurt but everyone having a great time, even when being crushed against the barrier at the front. ( Ooh, me ribs! ) 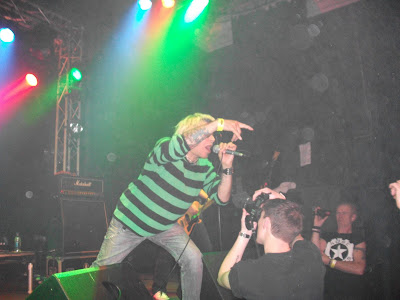 The set soon whizzed by, Party In Paris was blasted out, we called Charlie's Barmy Army back for a couple of encores, and that was it. A great evening of rock 'n' roll mayhem with your mates - what more could you want?
Before we lurched back out into the sub-zero conditions, knackered but happy, I got a couple of shots of post-gig camaraderie: 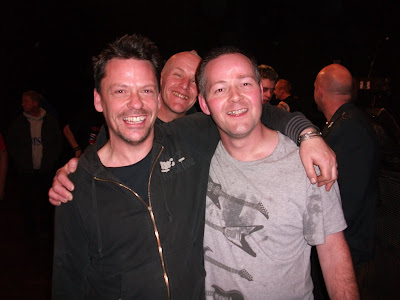 That's Glenn on the left - former star of The Possessed, LD50, Victims Of Emotion and Who's Todd? - current star of the fantastic Chinese Burn, and one of the nicest guys you could ever meet. Glenn you rock!! Behind us is Marcus, the ( excellent ) drummer from Noise Agents, craftily sneaking into the photo. And the bloke in the guitar T-shirt, wearing somebody else's pint is your humble blogger, moi. 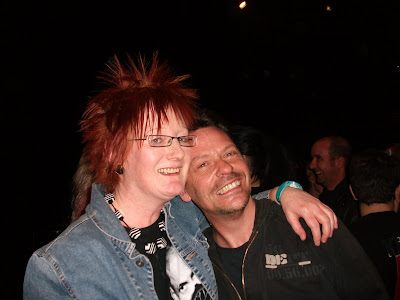 And here's Glenn again with the awesome Caz, number one Crass fan and multi-instrumentalist.
Cheers guys ( and Mark - sorry, your picture fell down the back of the hard-drive ) - let's do it again some time!
Soundtrack: UK Sub(versive)s
Posted by cerebus660 at 22:53