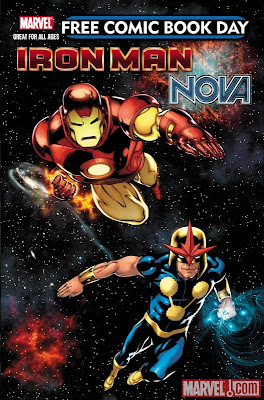 Free Comic Book Day: a great opportunity for comic shops to attract new customers or a chance for tight gits like me to pick up some super hero guff for nowt? Well, both actually. James and I had a nose around Proud Lion, Cheltenham's premier comic shop, today; I was really in there to look for Marvel's new SHIELD mag, which was sold out, but luckily it turned out to be FCBD so I came away with a couple of freebies.
Iron Man/Nova no.1 ( "Great for all ages!" ) features a slight but fun story of the Golden Avenger and the Human Rocket tangling with the Red Ghost and his Super-Apes. Of course old Shell-Head should be able to polish the floor with those Z-list villains in about half a page, but that wouldn't make for much of a story, so we get some light-hearted zoological fight scenes, absolutely no characterisation, and some fun-but-dumb lines like "Why did our baboon just transform into a tuning fork?" The adventure is reminiscent of some of the madder ( DC ) Silver Age stories, is drawn in a pleasingly cartoonish style by Craig Rousseau, and has the wonderful title "There's An Ape For That" - groan! Oh yeah, there's also a Marvel Super Hero Squad backup, featuring the Hulk, aimed squarely at even younger readers, which has some kinetic Bruce Timm-esque artwork by Leonel Castellini.
Strangely enough this comic is called "Iron Man/Nova" on the cover, but "Iron Man: Supernova" on the indicia. Ours not to reason why.... 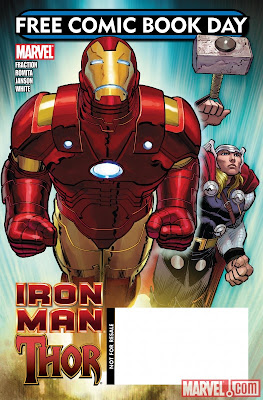 A slightly meatier meal is to be found in Iron Man/Thor no.1, an ecological disaster story by the team of Matt Fraction, the great John Romita Jr. and "Kinky" Klaus Janson. Ruthless property developers ( are there any other kind? ) are terraforming the moon, which has dire consequences for the Earth. Enter Iron Man and Thor. Exit property developers.
Marvel were always going to team up their latest movie properties for FCBD, so no real surprises here. Tony Stark is suitably charismatic and devious, Thor is suitably heroic and pompous, and Romita's artwork is suitably awesome, as seen below: 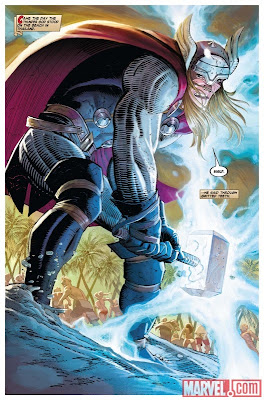 He really draws a mean Thunder God, doesn't he? Speaking of whom, I'm probably the last person on Midgard to post this new photo of Chris Hemsworth as the mighty Thor, from Marvel's forthcoming movie. I'm not familiar with the actor ( apart from his supporting role in Star Trek ) but he definitely looks the part here, and the costume is certainly faithful to the latest comic incarnation of Thor. I'd rather have seen a shot of the Son Of Odin striking a heroic pose with his hammer in his hand ( stop sniggering at the back! ) but this will have to do for now. Let's hope director Kenneth Branagh can deliver a convincing take on the Thor mythos, Asgard and all. 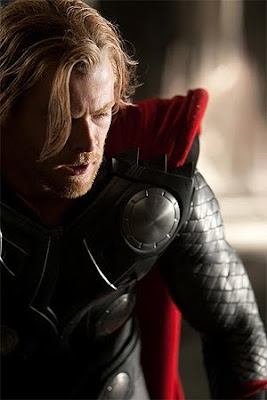 See more on this story over at Matthew K's wonderful Capes On Film. Tell him cerebus660 sent you!
Soundtrack:
Enter Sandman by Metallica
Paranoid by Black Sabbath
Posted by cerebus660 at 23:35

Looks a bit rubbery, I'd have been happy with a more realistic, looser plate mail. But the shot of the Destroyer looks awesome. The first Thor story I can remember, and it really stuck with me, was the Destroyer beating the tripe out of Thor.

Yeah, that pic of the Destroyer looks Kirby-tastic!
Didn't Thor's girlfriend Sif have her consciousness trapped inside the Destroyer? Thor had to fight it/her without knowing who he was beating on. Oh the irony!

You're too kind, but we do try our best over here. Thanks for the plug! Funny write up. Had a good chuckle at your story synposes. Cheers:-)

That was supposed to be "synopses". I wanted to sound smart and screwed it up.

No problem, Mr. K! I kinda like the word "synposes"!