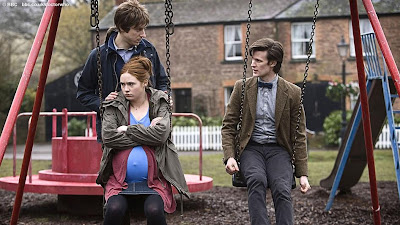 And when the Doctor wakes up, all his friends wake up too.....
This week the Tardis Trio find themselves in a world where they can't tell dreams from reality, where nothing is what it seems and menace lurks behind the most harmless of facades. Sort of how I feel every Monday morning.
The Doctor: "Listen to me. Trust nothing. From now on, trust nothing you see, hear or feel!"
The Doctor is visiting Amy and Rory, five years after they left the Tardis. The couple are living in a rural idyll, Amy is pregnant and baking cakes, Rory is now a doctor and has grown a rather disturbing ponytail. But then they wake up in the Tardis and it was all a dream. Or was it? They find themselves alternating behind the two realities, unsure which is real, all at the whim of this strange chap..... 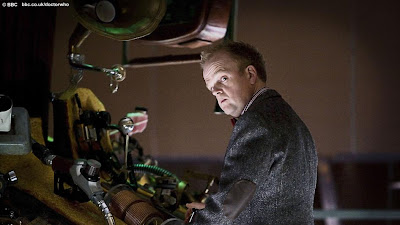 The Dream Lord.
Described by Simon Nye ( this episode's writer ) as "a relentless piss-taker", the Dream Lord delights in confusing and upsetting our heroes, as well as putting their lives in danger: in one reality they face an army of aliens hiding inside the bodies of pensioners, in the other the Tardis is dead and drifting towards a sub-zero fate within minutes.
The Dream Lord: "If you had any more tawdry quirks you could open up a tawdry quirk shop. The madcap vehicle, the cockamamie hair, the clothes designed by a First Year fashion student." 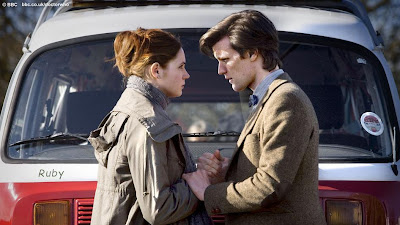 I've always been a sucker for stories like this, from the fragile realities of Christopher Priest's novels to the Hollywood surrealism of Vanilla Sky ( hey, I liked it! ) to any number of cheapo horror films dabbling in paranoia and delusions. Amy's Choice isn't exactly a classic of this sub-genre but there are some lovely, surreal touches throughout: the sound of birdsong in the Tardis signifying another change in realities, Rory's "death", the army of pensioners assaulting the country cottage, "There is an eye in her mouth!", the Tardis turning distinctly frosty.
The three lead actors and Toby Jones as the Dream Lord all give great performances, ranging from subtle to broad as and when required. Simon Nye's script isn't the full-on comedy many expected from the creator of Men Behaving Badly, but it has its moments - "If we're going to die, let's die looking like a Peruvian folk band" being the killer line. So, a fine episode, obviously an effects-lite breather between bigger-budgeted stories, with plenty of twists and turns, and a revelation for Amy - her Choice is Rory.
Three And A Half Bow Ties out of Five.
The Doctor: "Something here doesn't make sense. Let's go and poke it with a stick....."
Posted by cerebus660 at 23:39