Doctor Who: The Hungry Earth ( review with spoilers ) 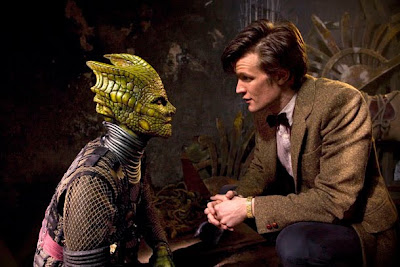 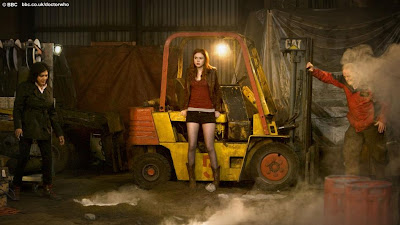 "We're trapped and something's burrowing towards the surface....."
The Doctor promises Amy and Rory a trip to sunny Rio ( probably feeling guilty that his evil alter-ego trapped them all in a frozen Tardis last week ) but, of course, it all goes pear-shaped and they end up in a Welsh village in 2020, where a "big mining thing" is drilling 21km into the Earth's crust. However, something is stirring far beneath the surface, and the Tardis Trio and the residents of Cwmtaff ( how Welsh is that name? ) find themselves under attack from the Silurians, led by tough lizard chick Alaya. She's come to kick ass and ( presumably ) eat flies..... 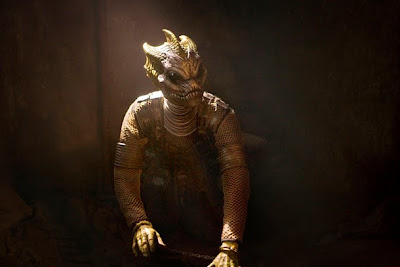 After last week's surreal shenanigans, this episode is the most traditional Who story we've seen in a long time: a small community is under siege by strange creatures, one companion is kidnapped, the other says "What's happening?" and "I don't understand!" ( a lot ), the Doctor sits down for a debate with his enemy, and the Tardis is out of control as and when the plot demands. But don't get me wrong - these are the kind of elements that make Doctor Who the show it is and always has been: a fun adventure series for kids and adults alike, often spooky, often thought-provoking, but never too serious for too long.
And there's a lot to love in this episode. The chemistry between Matt Smith and Meera Syal, as project boss Nasreen, is wonderful to behold - with Nasreen's pinging of the Doc's braces being a laugh-out-loud moment. The design work on the Silurian warrior and her briefly-glimpsed underground city is beautiful, promising so much more next week. The scenes in the darkened churchyard are atmospheric, recalling memories of The Daemons and The Curse Of Fenric for us old-timers. And I'll have to mention Matt Smith again: he really is fantastic in this episode, by turns boyish, steely, distracted and charming. And his scenes with young Samuel Davies ( as Elliot ) are filled with the childlike sense of wonder Steven Moffat has brought to this new Who era. Great stuff! I'm looking forward to next week's conclusion, which promises to be bigger and bolder in scale, with the Silurians ( or homo reptilia ) on the warpath. Hopefully Amy will have more to do than be a ( gorgeous ) damsel in distress, and hopefully the hot- weather-induced ratings dip will turn around :-(
Four Out Of Five Bow Ties. ( or Welsh Cakes. )
Posted by cerebus660 at 18:57