Doctor Who: The Power Of The Doctor ( mini-review with spoilers ) 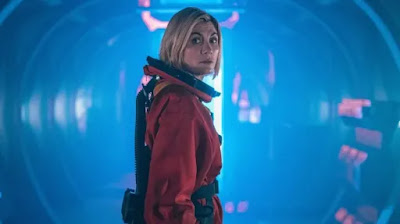 ( Well, I say "spoilers" but it's been over a week since the show was broadcast so I imagine all the spoilers have been thoroughly spoiled by now. )
So, Jodie Whittaker's final story, barring of course any return for future anniversary specials or suchlike. It seems like no time since the Thirteenth Doctor first fell to Earth in, er, The Woman Who Fell To Earth and now it's time for her to change again. But first: Daleks, Cybermen, the Master, returning companions and other surprises.
Even with its 90-minute running time, this special seemed over-stuffed with events, characters, plot-twists and locations... but I still thought it was one of the most fun episodes of the Chibnall era. I think the "Flux" season from last year showed that Chibs was finally getting the balance right ( or almost right ) between seemingly endless expository scenes and full-on action, while introducing some proper tension and interesting characters to his take on the Whoniverse. It's a shame this couldn't have happened sooner and made Jodie's era less frustrating but, anyway, The Power Of The Doctor was a suitably epic finale. 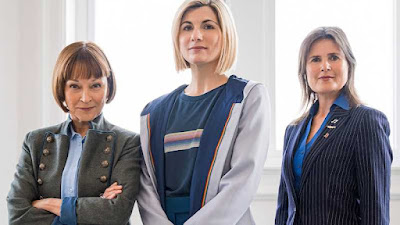 It was certainly a BIG story with allegedly more FX shots than in any previous Who episode and gave us some jaw-dropping moments as the Doctor and companions hopped trains in space, were caught between warring planets, outwitted armies of Cyberman and Daleks, and witnessed the Master forcing the Doc to regenerate against her will. But, amongst all this spectacle, it was the smaller, character-driven moments that stood out the most. Sacha Dhawan's Master was again gloriously unhinged and at his absolute worst when needling the Doctor's companions  -  his scenes with Yaz were particularly, creepily effective. The biggest surprise was the amount of cameos for returning characters. Even though John Bishop's Dan was short-changed ( I believe due to his stand-up commitments ) there was room for Tegan, Ace, Kate Stewart, Graham, Vinder ( slightly superfluous ) and even some older incarnations of our Time Lord / Lady...
*Spoilers ahoy!*
Paul McGann, Sylvester McCoy, Colin Baker, Peter Davison and David Bradley ( as the Hartnell Doctor ) all put in cameo appearances as aspects of the Doctor's consciousness. This was totally sentimental fan service... and it was wonderful. All did a great job in briefly resurrecting their characters for this special and the scene between the 7th Doctor and Ace was so lovely it brought a tear to my eye. And, talking about blubbing, the final moments between the Doctor and Yaz were very real and quite moving, both actors completely selling the grief of their impending separation. And then it was time for the Thirteenth Doctor to regenerate, for once not inside the Tardis but outside its doors at, er, Durdle Door ( or a facsimile thereof ) in Dorset, in a beautiful scene as she gazed out at the sunset over the sea:
"Doctor whoever I'm going to be next  -  tag! You're it!" 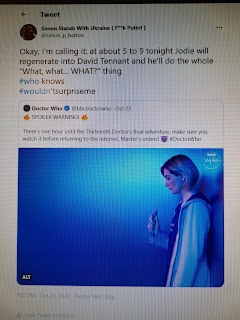 A couple of hours before I'd made the above prediction on Twitter because we'd all seen the photos of the sainted David Tennant ( the best Doctor ever, ever, ever, drool, drool etc. ) filming material for next year's 60th anniversary specials. And, amazingly, I was correct as 13 regenerated into 10... or is it 14?
"What, what... WHAT?" indeed.
I'm really in two minds ( not hearts ) about the Second Coming of Russell T Davies, which could be fantastic or could be a giant leap backwards, but we've got a while to wait until the RTD2 era materialises on our telly boxes. For now I'm going to remember the wonderful Jodie Whittaker who, for all the show's failings over the last few years, WAS the Doctor. And she was magnificent.
Posted by cerebus660 at 14:01

One of the most fun episodes of the Chibnall era?
That does sound a bit like damning with faint praise Simon.

Too much fan service for me, and - as you say - over-stuffed.
Still, perhaps my opinion doesn't matter so much, as I don't think twenty-first century Who is really for me. I enjoyed the first couple of seasons well enough, but increasingly diminishing returns set in after that, and post-RTD I only caught it occasionally and wasn't impressed.

Not sure about Whittaker in the part - the Doctor played by... a Northerner? Its political correctness gone mad!

I've seen it twice now and, thanks to it being so jam-packed, I still don't know whether I liked it or not. However, it was nice to see Ace and Tegan back and I do feel the return of the earlier Doctors was very well-handled, especially, as you say, with the Sylv/Ace reunion.

Chibnall's era was an odd one. Overall, I enjoyed it more than the Moffatt and Davies eras but he unfailingly disposed of his best ideas whenever they came along, without making any attempt to exploit them. For instance, the planet that sends people mad in The Battle of Ranskoor Av Kolos, Time revealed to be evil in Flux and the Doctor becoming a weeping angel. He never seemed able to spot the potential of these and a whole host of other concepts and, so, his era always felt like it was letting itself down whenever it was on the brink of achieving greatness.

@Sean
I know what you mean about damning with faint praise but I always want to be positive about Doctor Who because there's often so much negativity surrounding it from "fans". I've always loved the show, even though some eras seem weaker to me than others e.g. Sylvester's first season which was pretty lame, but he's since become one of my fave Doctors. Unless the BBC do something really heinous, like casting James Corden as the Doctor for example, I'll always watch it and try to find the good in it.

@Steve
I have to agree about interesting ideas being fumbled. Episodes like It Takes You Away started off with some great core concepts then went off at tangents and became unfocussed. I've read that, due to scheduling issues, some scripts never got past their first drafts... never a good thing. I felt that Flux saw the show getting back on track, with a few reservations, but it was too late really.