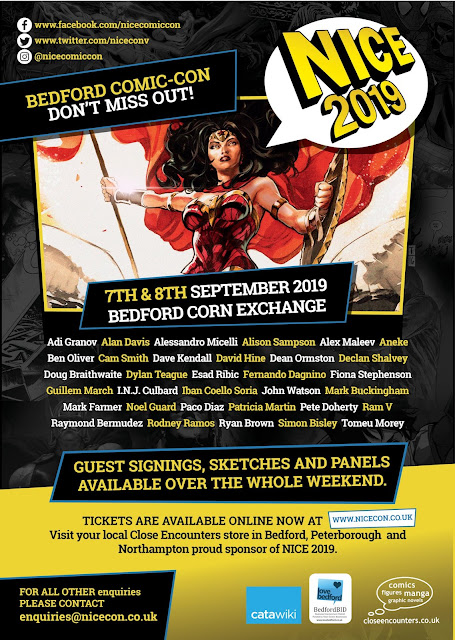 Last weekend ( keeping things current, as ever with this blog ) I went to Bedford for this year's NICE con. The main draw for me last year had been meeting the legendary Don McGregor and, while there was no one creator I was as interested in this year, there was certainly an inviting array of artists in particular on display.
After a trouble-free drive on a sunny, late-Summer morning I arrived at Bedford's lovely Corn Exchange and almost instantly bumped into my old blogging buddy Joe Ackerman. After a quick look around the con we went for a walk into Bedford where we had some lunch and Joe took me to local comic shop ( and sponsors of NICE ) Close Encounters. This turned out to be a pretty cool little shop with a surprisingly well-stocked back issues department  -  I bought a couple of recent Marvel comics, just out of interest ( including Marvel #1000 ), and an issue of Planetary which now completes my collection of that title. As ever, it was great fun to chat with Joe as we covered such subjects as DC's TV shows, tattoos, Brexshit, the merits or otherwise of drinking alcohol, and which inkers worked best with Gil Kane... 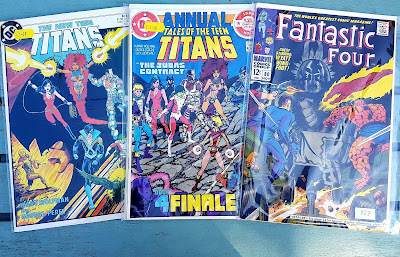 Back into the Corn Exchange where I spent some time just wandering around, trawling through the long-boxes of comics, chatting with some of the exhibitors and watching the artists at work. This last is always a pleasure, whether it's Dylan Teague working on a Batman sketch or Esad Ribic putting some finishing touches to a Conan painting. As well as the big players ( Alan Davis! Adi Granov! ), there were also plenty of independent comic creators there and it's heartening to see people being creative and often not just following the latest super hero trends. If I'd had unlimited funds I would have bought quite a few art pieces and indie comics but I had to settle for the three comics shown above.
I've recently been re-reading my New Teen Titans collection ( the wonderful Marv Wolfman / George Perez run from the early '80s ) and I'm now on the hunt for some issues to fill the gaps. Funnily enough, I'd been talking to Joe about the DC TV version of the Titans compared to the source material, and then I came across the two Titans comics above and promptly snapped them up. The Fantastic Four issue  -  number 80 from November 1968  -  is one I've been after for a very long time. This is one of the very few post-1965 issues of the Lee / Kirby FF that I don't own and it's one of only two FF stories from the Silver Age that I'd never previously read in any form. ( The other being FF #21, the first appearance of the Hate-Monger, if anyone is feeling generous and wants to buy me a copy. ) 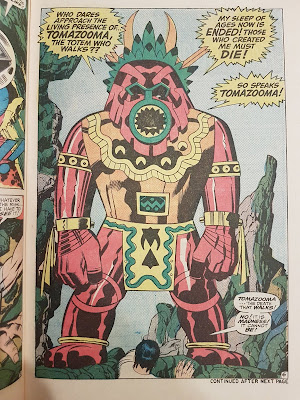 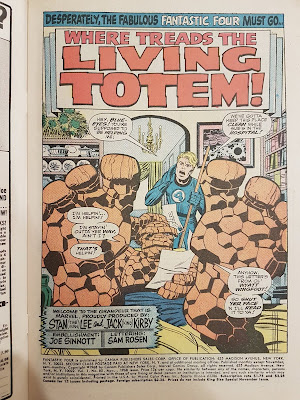 This is quite a goofy, stand-alone story in which Reed, Ben and Johnny go to the aid of almost-forgotten supporting character Wyatt Wingfoot, whose tribe of Native Americans is under attack from Tomazooma, the Living Totem. ( Of course. ) Hardly a classic but fun nonetheless, with Tomazooma being one of the last new antagonists created for the Lee / Kirby run, almost a precursor to the Celestials from the later Eternals comic with its shiny, metallic, robotic look juxtaposed with cod-mythology. And it's a lovely copy  -  cents-priced with no UK price-stamp, a shiny cover and some lovely white pages  -  all for less than £30.

There's also the added bonus of a letter in the letter column from one Donald McGregor of Providence, Rhode Island. Yes, this letter is from that self-same star of last year's NICE con, who was then a 22-year old comics fan, just a few years away from his own breakthrough into the business. It's a small world... 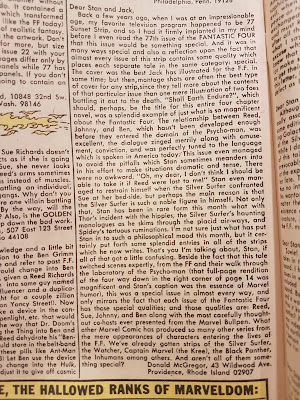 So, I had a great time in Bedford and hope to go again next year. I'm also hoping to persuade another blog-buddy Pete Doree from The Bronze Age Of Blogs to come along as well, and hopefully finally meet up with the Mighty Joe. Wouldn't it be NICE?

Pete "Bought a ticket to the con then booked a family get-together for the same weekend like a prat" Doree right here. And Dave's supposed to be the forgetful one of the three of us!
I'll do my utmost to turn up next year, if we all don't catch up before then at another con - Glad you two had a good time anyway, and yes, Close Encounters do have a good back issue section - I had to pry Dave outta there with a crowbar last time!

One day, Pete, when the stars are in the right alignment and the wind's blowing in the right direction etc etc - we may just all get together. Fingers crossed!