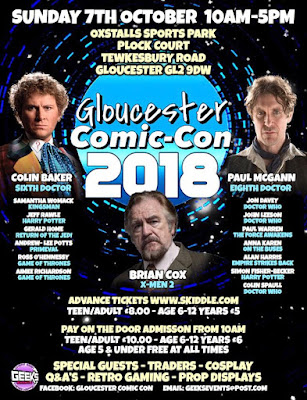 Last weekend Sarah, James and I went to Gloucester Comic-Con because we had nothing else to do really, and anyway it's just on the doorstep, so why not? Oh, okay... we went because *Paul McGann* and *Colin Baker* were there :-) Yep, the Eighth and Sixth ( respectively ) Doctors themselves. In Gloucester of all places.
In fact, it was a very Doctor Who- styled day as the new series began that very evening. But first there were two former Doctors to meet. And these guys... 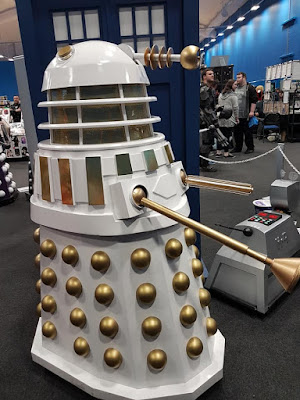 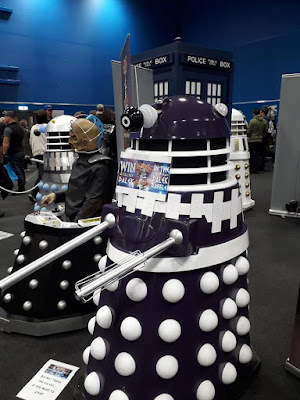 I'd had to twist Sarah's arm to come along to this con because Paul McGann is such a hero ( and heart-throb! ) of hers that she was worried she'd be tongue-tied if she met him and make a fool of herself. Of course, that kind of thing never stops me ( I'm always making a fool of myself! ) so I somehow persuaded her to turn up. Only minutes after we entered the venue I saw Paul signing at his table and dragged Sarah over there, saying the queue was really short, there's no time like the present etc. etc.  -  and then, there we were, chatting to THE Paul McGann! And, guess what?, he was really lovely... 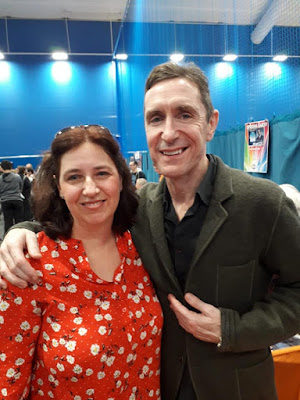 Paul spotted Sarah's flowery blouse and went straight into anecdote mode, telling us about a trip to Kew Gardens with his wife, where every woman he saw there had some kind of flower motif on their clothes, almost as if it were some unconscious urge to dress that way for the gardens. I asked Paul if he rocked the flowery shirt look himself but he said no, he had to draw the line somewhere.
Sarah took the chance to thank Paul for his Doctor Who work and especially his part in keeping the show's flame burning through the "wilderness years", from the TV Movie to his Big Finish audio adventures. We told him how we had been so excited by the Eighth Doctor's debut, even though it had turned out to be a brief false dawn, and we chatted briefly about his time filming in Vancouver for the show. Paul kindly signed an old issue of Doctor Who Magazine and also my copy of the Withnail & I screenplay  -  this is one of our favourite movies, so it's not ALL about Doctor Who  -  which was nice. Sarah asked if she could have a photo with Paul and he said he'd do anything... within reason. I think she almost fainted at that point... 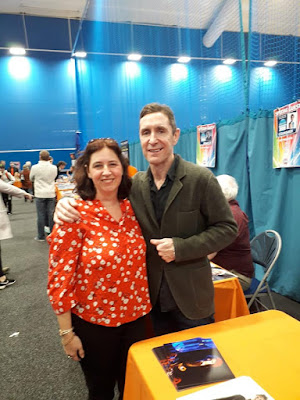 So, yeah, it was great to meet Paul and Sarah found she could speak to one of her heroes without clamming up or embarrassing herself. Easy. In the photo above you can just see the top of another Doctor's head... 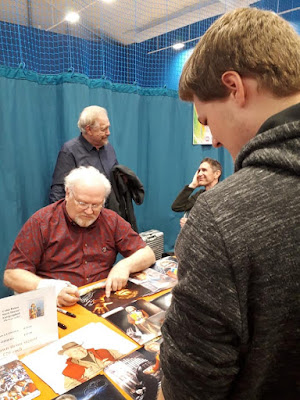 And that Doctor was none other than the mighty Colin Baker! James picked out one of Colin's publicity photos and asked the great man to sign it. ( He said to me later he wished he'd brought his DVD copy of Attack Of The Cybermen and had that signed... ) Colin didn't have a lot to say but was very gracious and when James told him that he was his favourite Big Finish voice actor, Colin said "That's great  -  tell everybody you know" or words to that effect. Bless him!
Oh, yeah  -  see that guy behind Colin? That's only Brian Cox, one of the greatest living British actors, just shooting the breeze with Paul McGann. What a cool moment! 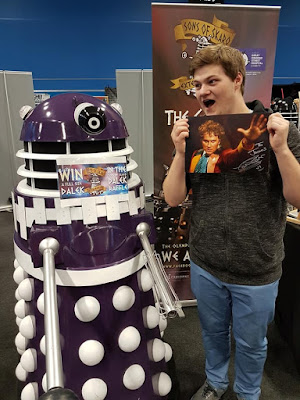 And here's James and friend with the signed photo  -  I think someone may have been inspired by the Sixth Doctor in his larger-than-life performance here :-) 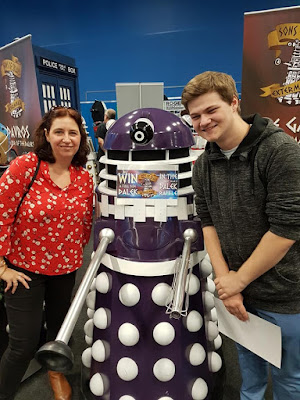 We had a fun time at the rest of the con ( even though actual comics were in short supply ) but the highlight for me was meeting, and shaking hands, with two Doctors. It doesn't get much better than that!

Soundtrack: old and new tracks ( from their new album Wide Awake! ) by the fantastic Parquet Courts

I wonder if the actors ever feel a bit embarrassed sitting there when there's hardly anyone about? It doesn't exactly look busy, nor do the two former Doctors look as if they're being swamped by fans. Or was it busier than it looks in your pics? CB looks particularly grumpy - perhaps he's wishing he was in a play somewhere? Good photos though.

Paul McGann definitely had the most people queuing for autographs, even though these photos don't capture that. It's a very pricey hobby so I guess it puts a lot of people off - I have to admit this is the first time I've actually paid for a signature.
Colin does come across as grumpy but I think that's just his outward appearance. We watched him talk to some fans with a very young child and he was absolutely lovely with them.
I did feel sorry for some of the other guests such as John ( voice of K9 ) Leeson who had a lot less attention. It must be quite dis-spiriting to sit there for hours on end with very little luck. A bit like fishing I suppose... but at least you're out of the rain :-)

I thought that McGann had the makings of a good Doctor Who in the TV movie he did back in the '90s. It's a shame that it wasn't considered a success at the time, as a series (or several) with him in the role would've been interesting.