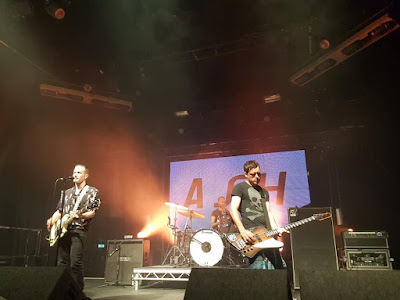 A busy weekend, live events-wise, saw me taking two trips down to Brizzle ( that's how it's pronounced, honest! ) to catch two of the greatest exports from Northern Ireland and the Republic of Ireland respectively: pop-rock-punk power trio Ash and wild-haired surrealist philosopher Dylan Moran. 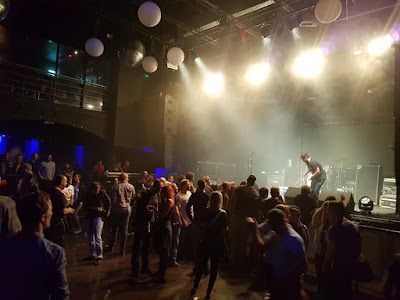 The Ash gig on the Friday night was at SWX, a venue that was new to me, just around the corner from the former Bristol Bierkeller. None of my usual gig buddies were available for this one but, after a chance remark to my daughter Sophie that I was coming to her adopted home city of Bristol, she said she'd join in the fun. And here's a very grainy photo of the two of us at SWX... 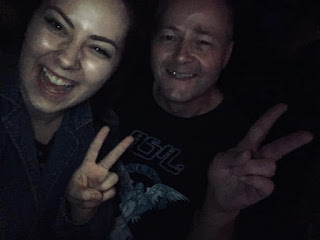 The support came from Norwegian band Death By Unga Bunga ( and I thought I used to be in a band with the world's worst name! ) who played a knowingly over the top and quite camp brand of '70s / '80s metal. We only caught two or three songs but their performance was lots of fun  -  playing guitars behind their heads, breaking into a brief tribute to Thin Lizzy, the very macho looking drummer and bass player sharing an ostentatious mid-song snog... 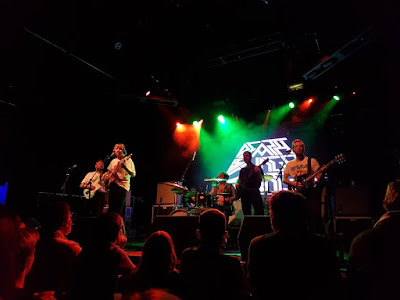 And then it was time for those Ash boys. I've probably seen them live half a dozen time and they never disappoint. They started with the upbeat, poppy True Story from their recent album, Islands, and then motored straight into crowd-fave Kung Fu, unusually moved from its usual kick-ass place at the end of the set. And the crowd went wild. Well, sort of. The audience seemed quite reserved for Bristol ( which suited me in a way because we could get near the front and I didn't have to worry too much about Sophie being caught up in a mosh pit ) but they eventually warmed up. The fact Ash played such fizzing power-pop bangers as Oh Yeah, Shining Light and Cocoon certainly helped... 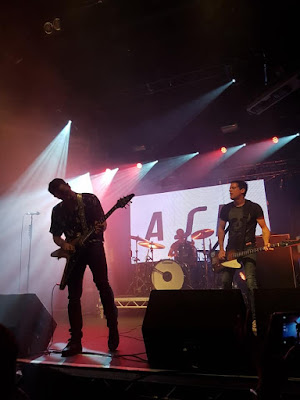 Of course, there's a romantic, sentimental side to Ash and the likes of Walking Barefoot, Incoming Waves and Annabel ( another great song from the new album! ) highlighted this dreamier quality, with all Tim Wheeler's classic, elemental pop song tropes of young love, moons and stars, tide and time coming to the fore. There was a fantastic segue from A Life Less Ordinary into Goldfinger, and then things got rockier as they blasted their way through the likes of Orpheus, Jesus Says and newly-minted sweary classic Buzzkill  -  waking up the sleepy Bristollians at last... 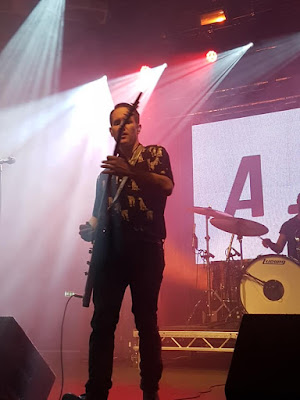 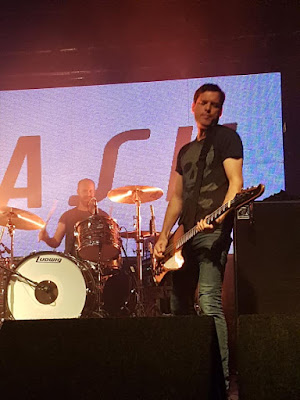 It was a cracking gig with the band clearly having a blast  -  the grins on their faces when they took their customary final bow saying it all. Although out of her usual live event comfort zone of musical theatre, Sophie enjoyed herself and it was lovely to share the evening with her. ( Although she seemed somewhat non-plussed when Ash broke into the Star Wars Cantina Theme ahead of Angel Interceptor. ) We went for a quick drink in Bristol afterwards and then I had to zoom back up the M5 to Gloucester to get some rest before heading back down to Bristol the next night... 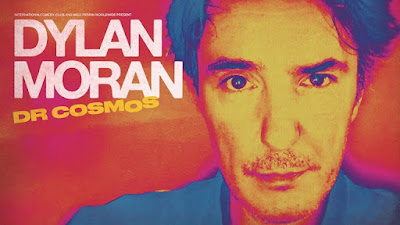 ...for the wonderful Dylan Moran! It had been many years since Sarah and I last saw Dylan  -  at Gloucester's Guildhall in those dark, pre-Blogger days  -  so we were well overdue to catch his act again. We're a whole family of Moran Fans, so James also came with us but, unfortunately, Sophie had a hen night to go to, so couldn't make it and was gutted. The gig was even at the Bristol Hippodrome where Sophie works so it was even more frustrating. Anyway, we turned up at the theatre, along with hundreds of other Moran Maniacs ( I think that's what we're probably called ) and proceeded to our box. 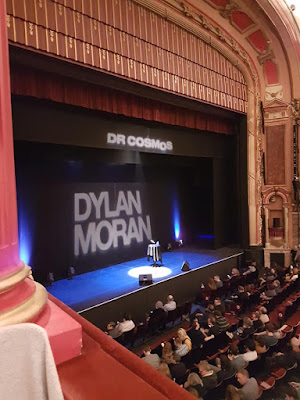 Yep, Sophie had reserved us three seats in a box, something we've never had at a theatre before. Although quite small it was fine for the three of us and gave us a pretty good view of the stage, as can be seen in the photo below. It was also good not to have to clamber over twenty other people whenever you needed to get to the bar / toilet. Plus it made us feel like royalty... 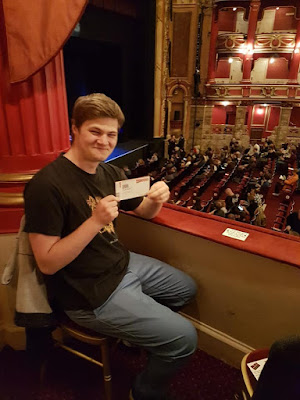 Dylan came on to the stage to some wild applause ( the place was pretty much sold out ) and said he'd have to mention Brexit, just to get it out of the way, you know. At the mention of that ridiculous omni-shambles most of us groaned but he proceeded to rip it apart and actually make us laugh about it. An early highlight of his set was his observation that Theresa May is the only person he's ever seen whose face appears to be backing slowly away from their body...

And then, politics done, Dylan went on to ramble in his own absurdly surreal way about his usual topics  -  growing up and growing old in Ireland, the lunacies of organised religion, and just being generally useless at everything. And apparently he's now given up the drink ( after being told to by a "12-year old" doctor ) which would explain the prominent tea-pot on stage instead of the former glasses of whisky. The main theme of the show ( named "Dr Cosmos" for some inexplicable reason ) was that of getting older and not understanding the world any more  -  but, to be fair, this is what he was talking about the last time we saw him, well over a decade ago. Dylan Moran ( or his stage persona at any rate ) is the kind of man who seems to have been born old and puzzled... which could be very sad but is actually hilarious. He mentioned at one point how we watch all those skincare and shower product adverts on TV, showing us those idealised, perfect bodies bathing in golden light  -  "When you know what you really look like is a pig in a typhoon. In a phone box. Having a panic attack." Similarly, on the subject of being told by a personal trainer that he needs to protect his core:
"Core? I don't even have a core! Everything's on the outside. It's your job to scaffold all this shit back in...!

And so it goes. Dylan's absurdist views on life, death and the cosmos had us all in stitches and maybe, just maybe, gave us a few things to think about too...
Posted by cerebus660 at 19:50