Doctor Who: The Woman Who Fell To Earth ( review with spoilers ) 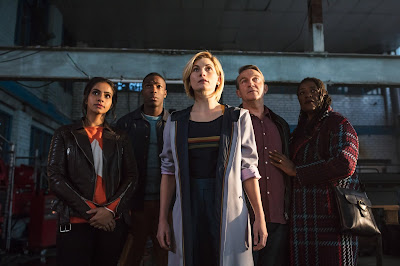 "We don't get aliens in Sheffield..."

Until now, that is. Yes, it's finally time for the Thirteenth Doctor to crash to Earth and start her new adventures.
But first of all we meet Ryan Sinclair, a young man struggling with a boring job and dyspraxia, and Yasmin Khan, a trainee policewoman who's looking for more interesting work than domestic disputes. And when a strange, freezing-cold alien pod lands in Sheffield they both find their lives suddenly get more interesting... and far more dangerous. 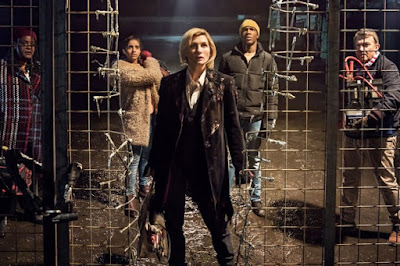 The disorientated, post-regeneration Doctor literally drops out of the sky into the story and enlists Yaz and Ryan ( along with Ryan's nan and step-granddad ) to help her solve the mystery of strange murders across Sheffield. Something is killing people and then bizarrely taking teeth as trophies... 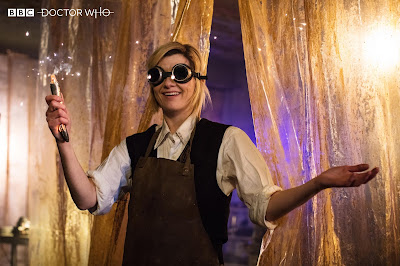 "We're all capable of the most incredible change. We can evolve while still staying true to who we are. We can honour who we've been and choose who we want to be next. Now's your chance  -  how about it?"

This quote from the Doctor is pretty much a mission statement for her character and the show itself. There's been a massive change this series  -  new companions, new theme tune, new look, new locations and, most importantly, a new and ( shock! horror! ) female Doctor. ( "Sorry, half an hour ago I was a white-haired Scotsman." ) And, from my point of view, all this change is immensely positive. Constituting an almost-total reboot, this new series has been eagerly awaited by many ( and reviled by some, even before they'd seen it ) as a fresh start for the show. Don't get me wrong, I was a huge fan of Peter Capaldi's era, and wished he could have done another series, but Doctor Who as a show thrives on change, and this radical change is an ideal jumping-on point for many who hadn't given it a chance before. It's pretty awesome for us old Whovians too...

For a start, it all looks stunning  -  the new camera lenses and altered aspect ratio really do lend a filmic quality to this first episode which should help the show punch above its weight in the overcrowded TV marketplace. The cast are all great, with Tosin Cole and Bradley Walsh standing out in some very emotional scenes. I'm hoping we'll see a lot more of Mandip Gill in future episodes because she gets a little lost in the mix here, but there is a lot to do in terms of establishing the characters, so it's early days yet. The story is very pacy with an excellent balance between plot and dialogue, horror and humour. The alien threat is fairly sketchy but visually appealing... and the explanation for the missing teeth is suitably grisly. I'm sure many little ones would have scuttled behind the proverbial sofa at certain points. And then there is the Doctor herself... 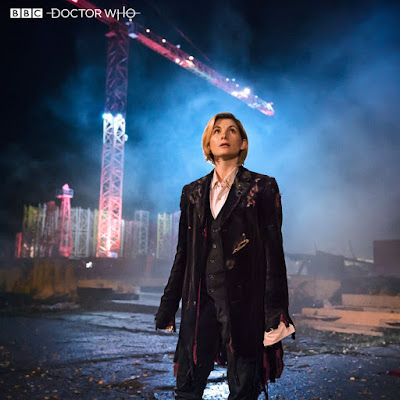 Fizzing with energy, a force of nature with a Yorkshire accent, Jodie Whittaker instantly convinces as the battered, bewildered but quickly recovering and learning Thirteenth Doctor. She has some lovely moments of gentle humour, an instant rapport with her new friends and is suitably steely but compassionate when facing down the alien predator with the dental fascination. There's obviously some way to go in establishing her character but this new Doctor has fallen to Earth and landed on her feet. I really loved this episode and I'm excited for the rest of the series to come  -  and we still haven't seen the new Tardis yet! Next Sunday can't come soon enough!

In the time-honoured Glass Walking-Stick tradition, I'm giving this one
Four Out Of Five Sonic Screwdrivers ( or wet weekends in Sheffield )

*Oh yeah  -  as well as watching a Doctor on TV tonight, earlier in the day we actually met two other Doctors. ( We did achieve peak Who-ness today, I think. ) But which two, I hear you ask, you voices in my head? All will be revealed...*
Posted by cerebus660 at 00:15

It didn't blow me away but, overall, I thought it was good. Usually I get bored during a post-regeneration episode because the writer keeps stopping the story for the Doctor to do the, "I don't know who I am. Give me fish fingers. Where did I get this face from? I need to spend three quarters of the episode in a coma, wake me when someone needs a sword fight," stuff. This time, the post regeneration wobbles didn't interrupt the flow of the story and felt more organic, therefore, I preferred it to Deep Breath, The 11th Hour and The Christmas Invasion.

The characters were likeable, the scenery was lovely and the music was a lot less intrusive than Murray Gold's.

The villain was a bit too reminiscent of the Predator for my liking but I did like the fact that he had to cheat to be any good at it.

My favourite part was the drunk throwing his salad at an alien, which was the most Sheffield thing I have ever seen.

It's the agenda behind the change that's depressing. New ratio, new music, you say, but why couldn't they have done that with Capaldi's Doctor? Why didn't they do it? It shouldn't have taken a female Doctor to make the show more accessible - that should have continued from Eccleston's Doctor, but Moffat ruined that. A female Doc I have no problem with - but it should have been the Doctor's daughter (same DNA) taking her father's place in the TARDIS. Her retaining the title could be explained by saying it belongs to whoever the present incumbent of the TARDIS is. Much like the US President - previous living Presidents are still called 'Mr. President', so Capaldi's Doc (or whatever man who replaced him) would still be called 'The Doctor' as well.

Society is being reshaped to accommodate the wishes of the few at the expense of the many, but we're too stupid or lazy to care. What the hell, as long as the British public are entertained on a Sunday night, eh?

Thanks for the comments, gents.

@Steve
I suppose the Doctor's regeneration is like a superhero origin story - you need to get it out of the way before you can properly get started. And aren't you meant to toss salads anyway? :-)

@Kid
While I can't see the TV show going with a Doctor's Daughter scenario, you can bet there's some fan fiction out there somewhere using that idea. I wouldn't be surprised if it hasn't cropped up in some of the officially licensed audio spin-offs too...