Theatre Of Hate at The Fleece, Bristol 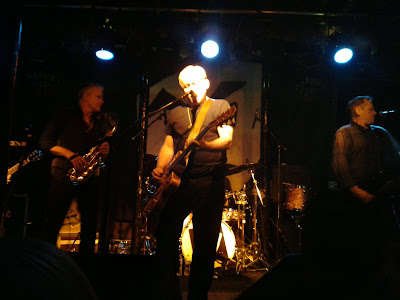 A couple of weeks back I went down to Bristol's hall of rock 'n' roll infamy, The Fleece, to see the reformed Theatre Of Hate. I can't say I was ever a fan of the band back in the day. I remember them being around in the Post-Punk era and I remember the single Do You Believe In The Westworld? being their one decent-sized hit and, er... that's about it. To be honest, I remember frontman Kirk Brandon's next band, Spear Of Destiny, more than TOH. But I thought they would be worth checking out, especially as Stroud's favourite sons the mighty Chinese Burn were supporting.
( And it was ace Burn guitarist Glenn's birthday too... ) 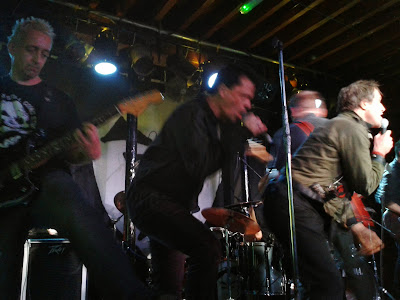 Here are Chinese Burn in chaotic action with guest guitarist Rob ( left ) from Positive Reaction and
( Punk supergroup in the making ) Borrowed Time. As long-time readers of this 'ere blog will know I'm completely biased when it comes to this band. I've seen them play many, many times over the years and, even though they're mates of mine ( Glenn, in particular, I've known since I was about 19 and is a great friend ), I wouldn't praise them if they weren't any good. In fact, I think they're one of the best live bands around with some of the coolest, most intelligent and tuneful songs of any of their contemporaries, and can easily hold their own when supporting bands like TOH, From The Jam, New Model Army, SLF or UK Subs. 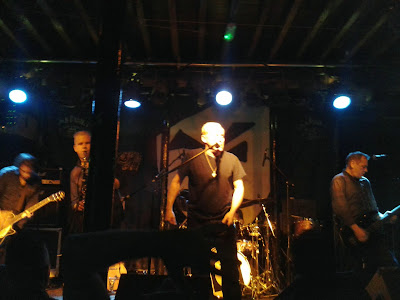 Even though I was slightly dubious about Theatre Of Hate after watching some of their old videos on You Tube, I was actually very impressed with them. They have a very dark, hypnotic power and can lock into some crushing grooves, with Stan Stammers' dubby bass often taking the lead, and the atonal saxophone adding some unusual colours. God only knows what Kirk Brandon is singing about but he has an extremely strong, distinctive voice with some serious lung power. Not many singers of his age can hold notes as well as he can! He also has some interesting stage moves  -  I especially like the one where he seems to be climbing an invisible ladder. The above picture shows him just after he's climbed back down :-)
They went down very well with the crowd ( although my gig-going companions, Caz and Jacqui, weren't totally convinced ) and caused many fat 40- or 50-somethings to hurtle around The Fleece like gorillas on steroids. I probably won't go out and buy any of their albums ( if I could find them ) but I'd definitely see them live again. Maybe I do believe in the Westworld after all...
Posted by cerebus660 at 22:07

Have a very Merry Christmas and a great 2014, Cerebus

Thanks mate. Hope you have a great Christmas and all best wishes for 2014. And thanks for supporting the blog :-)