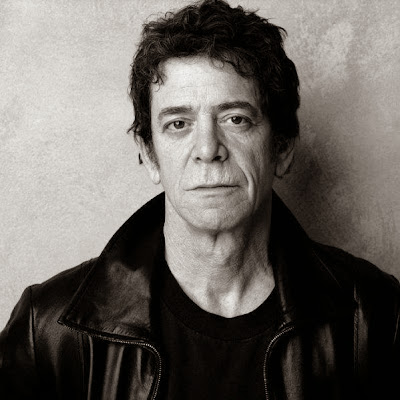 Very sad tonight to hear of the death of the great Lou Reed at the age of 71. Of course, you don't need me to tell you about Lou Reed, do you? The man was a true legend of rock music. Songwriter, Velvet Underground leader, grumpy old curmudgeon, reluctant popstar, Andy Warhol collaborator etc. etc. From the anti-Summer Of Love experimentalism of the Velvets' Venus In Furs and White Light / White Heat, through the unexpected pop success of Walk On The Wild Side, right up to the recent, controversial collaboration with Metallica, Reed was always going his own way and pushing at the boundaries of music / art / performance.
Here he is with friends and fellow rock outlaws / spacemen David Bowie and Iggy Pop. Bowie at the time was one of the biggest stars on ( or off ) the planet but owed a hell of a lot to Lou and Iggy, who had blazed a trail that the former David Jones had followed to become Ziggy Stardust, Aladdin Sane etc. As well as producing the Stooges' Raw Power album, Bowie also produced and played on Reed's classic Transformer. 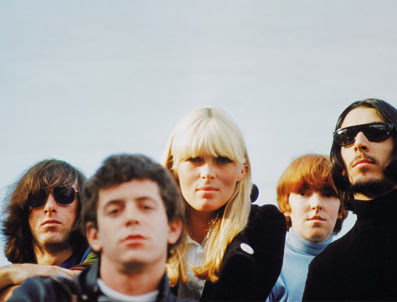 And here's a very groovy pic of the Velvet Underground and Nico, the band that famously sold something in the region of bugger-all records during their brief existence but inspired countless future musicians to put on dark glasses and write hymns to nihilism and excess.
Lou Reed was a true innovator and unique artist and will definitely be missed in this age of corporate-sponsored, bland, take-no-risks rock stars. I'll leave you with one of my favourite Reed songs from 1989's angry, political New York album...

And back at the Wiltshire Pedro sits there dreaming
He's found a book on Magic in a garbage can
He looks at the pictures and stares at the cracked ceiling
"At the count of 3," he says, "I hope I can disappear
And fly, fly away..."

Oh that is a sad one, genuinely he was one of the most influential singers and songwriters of our times. I knew he had health issue cumulating on a liver transplant but thought it had been successful Sadly I now assume it wasn't) - Despite being an avid fan of the Velvets and his solo career I only managed to see him live once when when they reformed and played in Edinburgh (a fantastic show)thoughts go out ot his family , friends and many many fans -McScotty

I became a nut for Lou Reed's music in the 80's, when my brother bought New Sensations. I was hooked. A little later, when I went into the Army, I bought New York, and I said to my buddies, you guys gotta listen this. They were blown away. I remember my pal Gus walking through the motorpool singing Dirty Boulavard. (only he changed the lyrics to "dirty motorpool")
A while back I bought his tribute to Poe, The Raven. Weird, wonderful, disturbing and beautiful.
I can't tell you how sad I am today. I called my brother and told him...
Jesus, what a loss. I feel like I wanna cry. Another one of my heroes is gone. M.P.

McScotty, M.P. - thanks for commenting, guys. Lou Reed was definitely one of a kind...