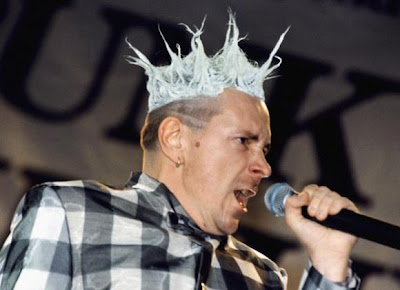 I haven't done a Fave Gig Fri for a while, so here's a classic - the Sex Pistols at the Phoenix Festival, July 1996.
As previously mentioned here the Phoenix had a great lineup of bands: I saw The Chemical Brothers, Echobelly, The Specials, The Cardigans, 3 Colours Red, plus a few dodgy bands like Senser, Dub War and Ian Astbury's Holy Barbarians ( featuring Vic Reeves on high kicks! ). But the main reason I was there, my mate Glenn was there, a few thousand others were there, was to see the legendary, newly-reformed, still pissed-off Bay City Rollers. Sorry... Sex Pistols!!
Nowadays every bloody band and its dog reforms and trudges round the nostalgia circuit, but back in the '90s it wasn't so common, so the question was - would it be worth it? The Pistols were a band who burned brightly for a brief, exciting moment and then were snuffed out by internal power struggles and external pressures. They left a trail of anarchy, controversy, brilliant music and dead bodies ( Sid 'n' Nancy ) behind them. They had been encased in a kind of Punk-aspic for nearly 20 years and now they were back. Would they be just sad old farts, ruining their legacy by churning out Punk karaoke, or could they do the impossible and still be vital after all that time?
What do you think?

The feeling in the sweating, steaming crowd on that muggy July evening was a mixture of hope, excitement and trepidation. But when the band finally hit the stage the whole field erupted: the Pistols were back! They powered through a set of classic song after classic song, reclaiming their mantle of greatest, loudest, nastiest, funniest band in the world from all the pretenders that had sprung up in their wake. Matlock and Cook provided the rock-solid rhythm and backing-vocals, Jones the guitar hero poses and raw energy. Lydon ( who was still not quite the Country Life-flogging cartoon he is now ) was on fantastic form: his sneering, sarcastic front often slipping to reveal a man obviously enjoying his belated chance in the spotlight. If any band and any singer ever deserved a second chance after years of bitterness and struggle it was the Sex Pistols and John Lydon. And they proceeded to take that opportunity and play as if their lives depended on it. Everyone in the crowd knew that, despite Lydon's protestations of "doing it for the money", they loved the music and, you know, they meant it maaan!
( Saying all that, the next time I saw them, at Crystal Palace in 2002, they were awful! Lydon forgot the words to most of the songs, they played Silver Machine for God-only-knows-what-reason, and seemed bored with it all. Anarchy or what? )
Soundtrack: Never Mind The Bollocks by Take That.
:-)
Posted by cerebus660 at 23:12

I had tickets to see 'em in Belfast that summer, but they pulled out due to the whole mood of civil unrest in Northern Ireland at the time. The whole Garvaghy Road bullshit had turned "marching season" into "riot season". And, as the supposed scariest bunch of anarchists in the world, I thought they wouldn't have been so damned chickenshit about it.

Just to play Devil's Advocate for a minute - a couple of comments: Lydon in particular has always spoken out against violence, and any promoter of such a big gig would also have pulled the plug at the first sign of security problems. But that doesn't help the pissed-off ticket-holders! Have the Pistols ever played Northern Ireland since then?

Hello Si - I would say the Pistols at The Phoenix festival was one of the best gigs I've ever seen, the whole day was fantastic, something I'll never forget. The sheer anticipation waiting for them to come on was unbeliveable and was worth the wait. As you said, Crystal Palace, utter rubbish, such a let down. A musical farce, flogging a dead horse, too true!!!

That was a great day at the Phoenix, all right. And DAMN HOT too!!

At Crystal Palace I thought some of the support bands had more of that old Punk spirit than the headliners: And You Will Know Us By The Trail Of Dead, and the Libertines, who were shambolic but more "real". And what a dodgy crowd! Very ugly and aggressive. You don't get that at Chinese Burn gigs :-)