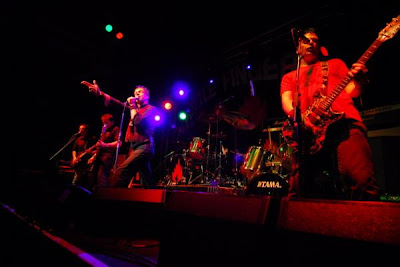 Sarah and I went to see my mate Glenn's band, Chinese Burn, last night at the White Lion in Chepstow. ( That's Glenn on the far right of the photo - actually from the Guildhall, Gloucester, 2008. ) After a pretty awful week ( see previous post ) it was just what we needed: a chance to have a few drinks with friends and get our ears blasted by Punk rock!
First impressions of Chepstow: bloody Hell! At only 8 o'clock in the evening the high street was already packed with five police cars, one riot van, two ambulances and a coachload of chavs having "words" with the cops. We headed up the hill to find a crowd of multi-coloured mohicans and old-school skin'eads. This must be the place! The White Lion is a cramped, busy pub with a pool table you virtually have to climb over to get to the bar, the music venue being some kind of converted shed at the back.
Chinese Burn were good fun as ever, cranking out a fairly short set of their no-nonsense, tuneful Punk, with the occasional rythmn 'n' blues or garage influences creeping in. Lead singer Ben is a great frontman, his style a mixture of Iggy, Rotten and his own eccentric personality. He also writes some cracking lyrics!
The main band were The Sex Pistols Experience. I'm not normally interested in tribute bands but this lot are bloody good at what they do. In fact, I think they do a better job of "being" the Pistols than the real band do nowadays. At least "Johnny Rotter" remembers the lyrics! Definitely worth checking out, if only to see their frontman's take on John Lydon: spookily accurate and very funny.
So, a good night out, only slightly spoilt by some swastika-wearing (!!) twat and his mates throwing Nazi salutes and spoiling for a fight which never actually happened. We nearly took our Sophie and Glenn's daughter Millie, but were unsure about the age limit at the venue. It's a good job we didn't as the atmosphere would have been a little too intimidating.
Check Chinese Burn out at www.myspace.com/chineseburntitanic.
This has been a public service announcement ( with guitar! )
Soundtrack: You Can Never Be Sure and Defending Stalingrad by Chinese Burn.
Posted by cerebus660 at 15:05

Why wasn't the comedy nazi chucked the hell out? Swastikas... fuck me.

Unless of course he was being post-modern and turning our pre-conceptions upside down in a dadaist fashion.

No, I think you need braincells for post-modernism. He was just an asshole...
To be honest it was a bit worrying: here was a man with "half an inch of brain" out to provoke a reaction, accompanied by his neanderthal mates, all up for a bit of the old ultraviolence. It almost kicked off a couple of times but luckily fizzled out.
Reminded me of gigs I went to in the bad old days of the 80's when trouble was seemingly compulsory. Some 80's fashions should stay in the past...

I recently came accross your blog and have been reading along. I thought I would leave my first comment. I dont know what to say except that I have enjoyed reading. Nice blog. I will keep visiting this blog very often.