Bruce Week Part 4: Where The Bands Are 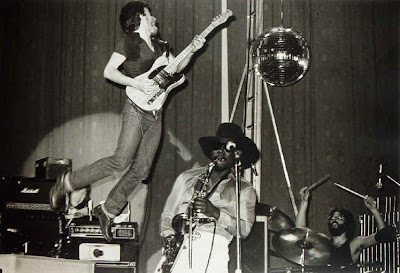 Springsteen is an artist who has sold millions of albums, won Grammys and other awards, performed for the incoming US President and once had his face on the covers of both Time and Newsweek simultaneously. But... to really understand The Boss's appeal you have to see him play live.

Bruce Springsteen is an absolutely electrifying performer, and that's as true today as it was 30-odd years ago on the Jersey Shore. He never gives less than the best performance he possibly can, and he also expects that from the well-drilled E Street Band. Known for their 3 hour-plus sets, Bruce and the Band built a reputation for playing exhilarating, dynamic gigs, expertly blending upbeat rockers, intense mood-pieces, theatrical stage moves and Bruce's monologues on adolescence and growing up. Today they might be slightly less energetic ( with at least two band members having had major surgery in the last few years ) but still totally committed to rock 'n' roll and to giving each audience their money's worth. This ain't the nostalgia/necrophilia of a Rolling Stones or Eagles, it's the real thing...
The first time I saw Bruce live was on the 1999 Reunion Tour at the Birmingham NEC. The E Street Band were back together and playing live for the first time in 14 years, and the buzz of anticipation was intense. Could they still cut it at the turn of the millenium or were they burnt out? What do you think? They kicked off with My Love Will Not Let You Down ( a dusted-down rarity from the Tracks box-set ) and then powered through some Greatest Hits-style rockers, an intense take on The River, a country-fied Factory and a band intro during a fantastic Tenth Avenue Freeze-Out. Just as we were reeling from the 1-2-3 tempo, Bruce took the stage alone to give us spine-tingling acoustic versions of Born In The USA and The Ghost Of Tom Joad. Then the power level jumped another notch as guest Edwin Starr came on for a storming version of his masterpiece War, followed by classic after classic, into the encores. Backstreets was epic, Hungry Heart a mass singalong, huge lights dazzled us during Born To Run, and all the E Street vocalists took turns on a beautiful If I Should Fall Behind. The gig ended with Land Of Hope And Dreams, the only new song in the set. Bruce went into full-on preacher mode to rededicate the band's commitment to "the majesty, the mystery and the ministry of rock 'n' roll." An amazing gig but the outstanding question was "what next?" Would Bruce get his recording groove back or would the E Street Band remain on the nostalgia circuit? After the terrible events of 9/11 we had our answer: The Rising album and accompanying tour showed us an artist who wanted to help the world rise above its problems and celebrate life, love and good times, while never forgetting the bad. That may sound corny but, as they say, it's a dirty job but someone has to do it...

And, courtesy of the ever-wonderful Backstreets.com, here's the set-list from that gig:
MAY 16 / Birmingham, England
Notes: The first show back after a two week break. The tour debut of "War" includes special guest Edwin Starr.
Setlist: My Love Will Not Let You Down/Prove It All Night/Two Hearts/Darlington County/Factory/The River/Youngstown/Murder Inc./Badlands/Out in the Street/Tenth Avenue Freeze-out/Where the Bands Are/Working on the Highway/The Ghost of Tom Joad/Born In the U.S.A./War/The Promised Land/Backstreets/Light of Day
First Encore: Streets of Philadelphia/Hungry Heart/Born to Run
Second Encore: Thunder Road/If I Should Fall Behind/Land of Hope and Dreams

OK, I promise: that's enough Springsteen for now. Although there may be more posts further down the line - The Boss turns 60 (!) later this year and it would be rude to miss it...
Posted by cerebus660 at 22:49