Full of sound and fury... 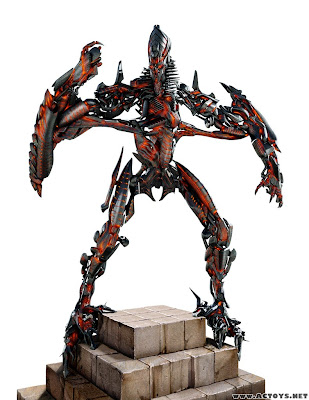 ...signifying nothing.
Yep, I took James to see Transformers 2: Blow More Shit Up last night. ( I think that's what it's called. ) Almost a spiritual experience for the lad, not so much for me. The film more or less goes like this: explosions, robot battles, bad humour, more explosions, much more bad humour, more robot battles, slow-mo Megan Fox, really big explosions, really bad humour, more bloody robot battles, and on and on and on. With all that excitement there wasn't much room for such luxuries as plot, character, pacing, suspense, wit, intelligence etc. etc. Sorry to seem so negative but the film was just surface and spectacle, which eventually became draining and tedious. It all looks fantastic but so what? It's like having your face Sellotaped to a games console.
Oh, yeah... and Paris got trashed again. What is it with Hollywood blockbuster auteurs (cough!) and Paris? We'd just seen a trailer for GI Joe in which the Eiffel Tower is destroyed in a way highly reminiscent of Team America: World Police. But that film was a satire... wasn't it? Time and again France in general and Paris in particular are used to show how decadent and left-wing those goddamn pinko Europeans really are. It does get a bit boring, Hollywood. Why not have a go at some other country? Canada? Now you're talking.
Posted by cerebus660 at 22:06

Aww and i was gonna see it. :( I'll still see it. I like explosions,a nd the first film, which was just ridiculous. but great.

Have to apologise for my slightly negative post. I didn't honestly expect a toy commercial...sorry, Transformers movie, to be a work of genius, but I do think it could have been a lot better. And shorter.
I'd love to hear what you think when you see it.