It's that time of week again, cinephiles  -  the third week of the never-ending  ongoing film challenge  -  and we're starting with an absolute classic. ( Yeah, I know I say that a lot but this one really is. )

Day Fifteen
A film that makes you happy

Singin' In The Rain ( 1952 )
Yep, every time. Just a joyous movie, every frame filled with colour, movement and sheer exuberance. The ultimate Hollywood musical. 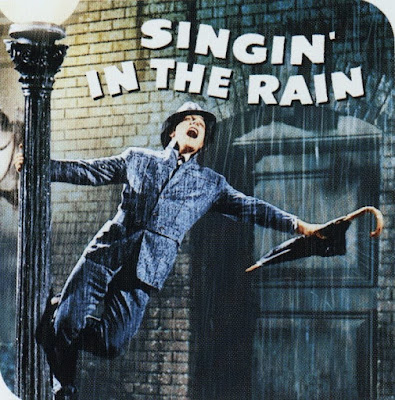 Day Sixteen
A film that is personal to you

Not quite sure what this means but I'm going with
Star Wars ( 1977 )
When this movie was released in the UK I had just turned 11-years old, the perfect age for Lucas' space epic. Like most kids of my generation I was completely knocked out by it  -  I hadn't known it but this was the film I'd been waiting for... 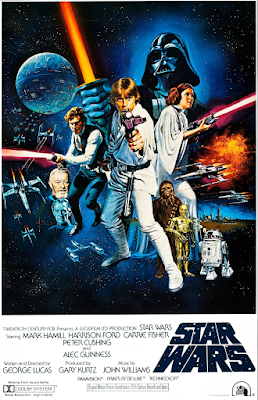 The Godfather Part II ( 1974 )
Most sequels are a case of diminishing returns but Coppola's second installment of his Corleone family saga is a masterpiece. So much so that, like the first two Superman movies, it's difficult to separate them. The cinematography, the score, the dialogue, the performances  -  all unbeatable. 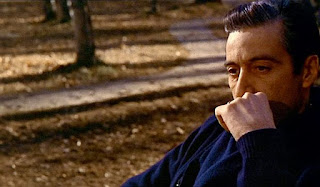 And, as if the cast of the first movie wasn't wonderful enough, the sequel added Robert De Niro as a young Vito Corleone. Just outstanding. 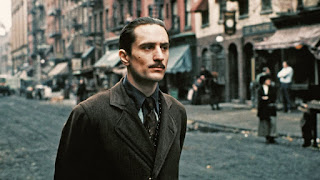 Thank God Coppola didn't make an inferior third movie long after the fact.
( What do you mean he did??? )

Day Eighteen
A film that stars your favourite actor / actress

It's very hard for me to pick a favourite actor ( even if it was "pick a fave actor from a particular decade" it would be difficult unless it was the 1910s ) so I'm going with
The Philadelphia Story ( 1940 )
Here are three of my faves in one movie ( and one promotional photo )  -  Cary Grant, Katharine Hepburn and James Stewart:

Day Nineteen
A film made by your favourite director 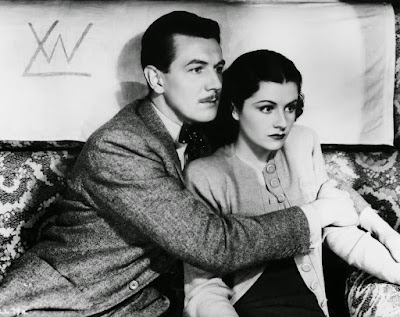 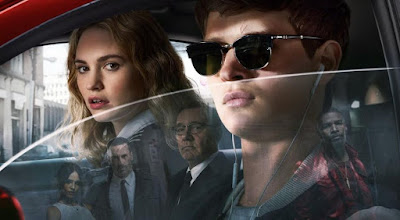 Day Twenty
A film that changed your life

There was a girl at work I liked and I knew she liked me. I asked her to see this film with me ( I knew she was a fan of Willis in Moonlighting ) ...and we're still together 33 years later. 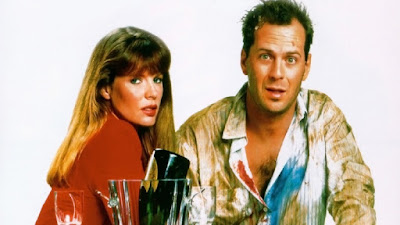 Day Twenty-One
A film that you dozed off in

Avengers: Age Of Ultron ( 2015 )
My family can attest to the fact that I can fall asleep anywhere any time but this particular superhero slugfest seemed to go on for sooooooooooo long that the old eyelids began to droop somewhere during the climactic battle... 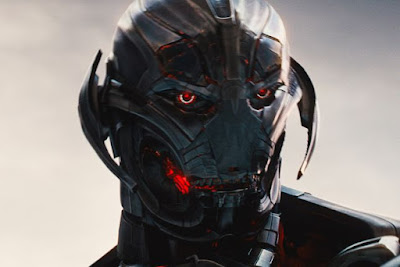 Sorry Ultron, I know you tried your best.

As ever, if anyone would care to join in with this challenge then please leave a comment, it would be very welcome. Cheers!
Posted by cerebus660 at 22:20

Simply brilliantly acted and very funny from the start to the very last scene with Jack Lemon and Joe E Brown.
.

Reminds me off fun family Christmases in more innocent times and my family who are sadly now mostly no longer here.

Was a close one between this and your excellent selection of The Godfather II, so plonked for this as it is a brilliant film and better that the previous ALIEN which is also a great movie.

Very tough one but I have gone for Inherit the Wind with Spencer Tracey excellent performances from the entire cast (including a young Gene Kelly).The subject matter about a court case defending a young teacher teaching the theory of evolution mAy sound bland but was gripping.

I don’t really have a favourite director and to be honest I doubt I could tell who directed most films (with the exceptions of folk like Ken Roach,, Spielberg, Lucas who have distinctive signatures) unless being told who it was. However Ridley Scott has just produced so many films I really like (including Prometheus, sorry) but this is my favourite of his films not hindered by a good soundtrack (including Bowies Starman, my fav song)


Day Twenty
A film that changed your life - I, Daniel Blake
Didn’t change my life but made me realise again how hard life can be for some folk when they find that the State can treat them so shoddily and deny benefits when they really need help – the loopholes, red tape and insistence in doing it “online” and not talking (or listening) to a cry for help – Brilliantly sad and sadly real

Day Twenty-One
A film that you dozed off - Capote

I know lots of folk love this and it won awards but for me it was sooooooooooo boring and pretentious. We managed to struggle through 90% of the film before we decided life is to short to spend watching (for us) movies like this and left early (first time ever)

Hi Paul! I certainly couldn't argue with any of your first three choices - all big favourites of mine, all total classics of their respective genres.

Of your other choices, the only film I've seen is The Martian which I thought was... okay. When it comes to Ridley Scott my faves are Alien, Blade Runner and Gladiator and I'm not too bothered about the rest. Incidentally, how much money has been spent on finding Matt Damon in various movies? Someone give the guy a map.

I confess I haven't seen either of the last two. I'm not really interested in Capote but I may give I, Daniel Blake a try, even though I'm not really a fan of the Ken Loach / Mike Leigh style of urban misery.

Thanks again for playing. One more week to go!

Apologies for taking my time to get to Week 3 Simon, but better late than never.
Right, here goes...

A film that makes you smile - Jungle Book (1967)
What can I say? Disney, Kipling... seems like they should add up to something a bit iffy, but they get you when you're young. I think the songs are a big part of the appeal - the cassette of the soundtrack was the first album I ever had (although not the first I bought for myself, which came quite a bit later).

A film that is personal to you - Eh...?
They're all personal really - the reaction depends on us, otherwise we'd all have the same opinion about them, right?
So... I'm going to pick a first date with the future missus film - Twin Peaks: Fire Walk With Me (1992). Not my choice really (I wasn't familiar with the tv series) but seeing it late night in an empty cinema definitely made an impression.

Favourite film sequel -
Yeah, the Godfather 2 is impressive - hey, for all its flaws I even like the third one (sorry) - but for variety I'll go for Mad Max 2 (1981).
Oh dear, Mel Gibson... but back then I had no idea what to expect and it completely blew me away. When I finally saw the first one it was a bit disappointing.

A film that stars your favourite actor/actress -
Dunno about this one, as I tend to think actors are good in some parts and not others. I've always liked Julie Christie, possibly not really for her acting(!) but anyway... Don't Look Now (1973).

A film made by your favourite director - Aguirre, der Zorn Gottes (1972) by Werner Herzog

A film that changed your life -
Er... who knows how their life might have been different? The best I can do here is Sleeping Beauty (1959). We discussed the impression it made at an early age in Week 1, and I did go on to study animation at college later, so...

A film you dozed off in -
2001: A Sp... nah, just kidding Simon (couldn't resist).
Star Wars: Phantom Menace (1999)
I was curious to see it after the reaction - could it really be so bad even Star Wars fans disliked it? Still don't know, because I've failed to stay awake through it on tv twice now. At least it didn't ruin my childhood (;
Age of Ultron is a good choice. All the Marvel films get a bit tedious when the cgi really kicks in imo.

Will get to Week 4 soon, honest.

Hi Sean! Similarly, apologies for my late reply to your reply...
Okay, let's look at your list :-)

The Jungle Book. As you say, this one never fails to raise a smile. The songs are indeed a huge part of this movie's continuing appeal, they are obviously legendary. For people of a certain vintage I suspect they're as well known for being featured on Ed Stewart's Junior Choice as for being part of the movie itself.

Twin Peaks: Fire Walk With Me. Some date movie, eh?

Mad Max 2. I was never really a fan of the MM movies although I'd probably watch that first sequel if I had to choose. I actually paid good money to see Mad Max: Beyond Thunderdome at the cinema - well, it was the '80s and cheesy rock-video-style dystopias were fashionable.

Don't Look Now. One of my all-time fave movies from the genius that was Nicolas Roeg. Julie Christie's performance in DLN is just heartbreaking and she is, of course, absolutely gorgeous. Have you ever seen her in Billy Liar? She's the epitome of carefree, Swinging Sixties cool as Tom Courtenay's dream girlfriend.

Aguirre. We bought our son James a Herzog box-set for Christmas ( festive! ). We've watched Fitzcarraldo and Nosferatu but still haven't got round to Aguirre. Will have to see it before too long, it looks epic.

Sleeping Beauty. Interesting to hear that you studied animation at college. Did you go on to pursue it afterwards?

Star Wars: The Phantom Menace. It really is as bad as people say. Sleeping through it is probably the best thing to do.