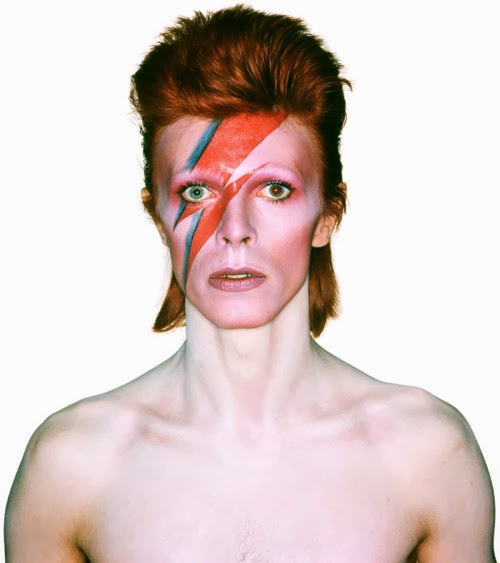 After blogging about my favourite comics from 1973 the other day, I'm now going to turn my nostalgic gaze ( with all the cutting-edge topicality you'd expect from The Glass Walking-Stick ) to the music of that far-off time of platform boots and flares. Yes, forty years ago ( plus a few days ) the world had turned Glam. Everywhere there were painted, prancing, peacock-like creatures cavorting in a cavalcade of androgynous ecstasy... and that was just the blokes etc. etc. Well... no, the world wasn't really like that. But it would have been fun. 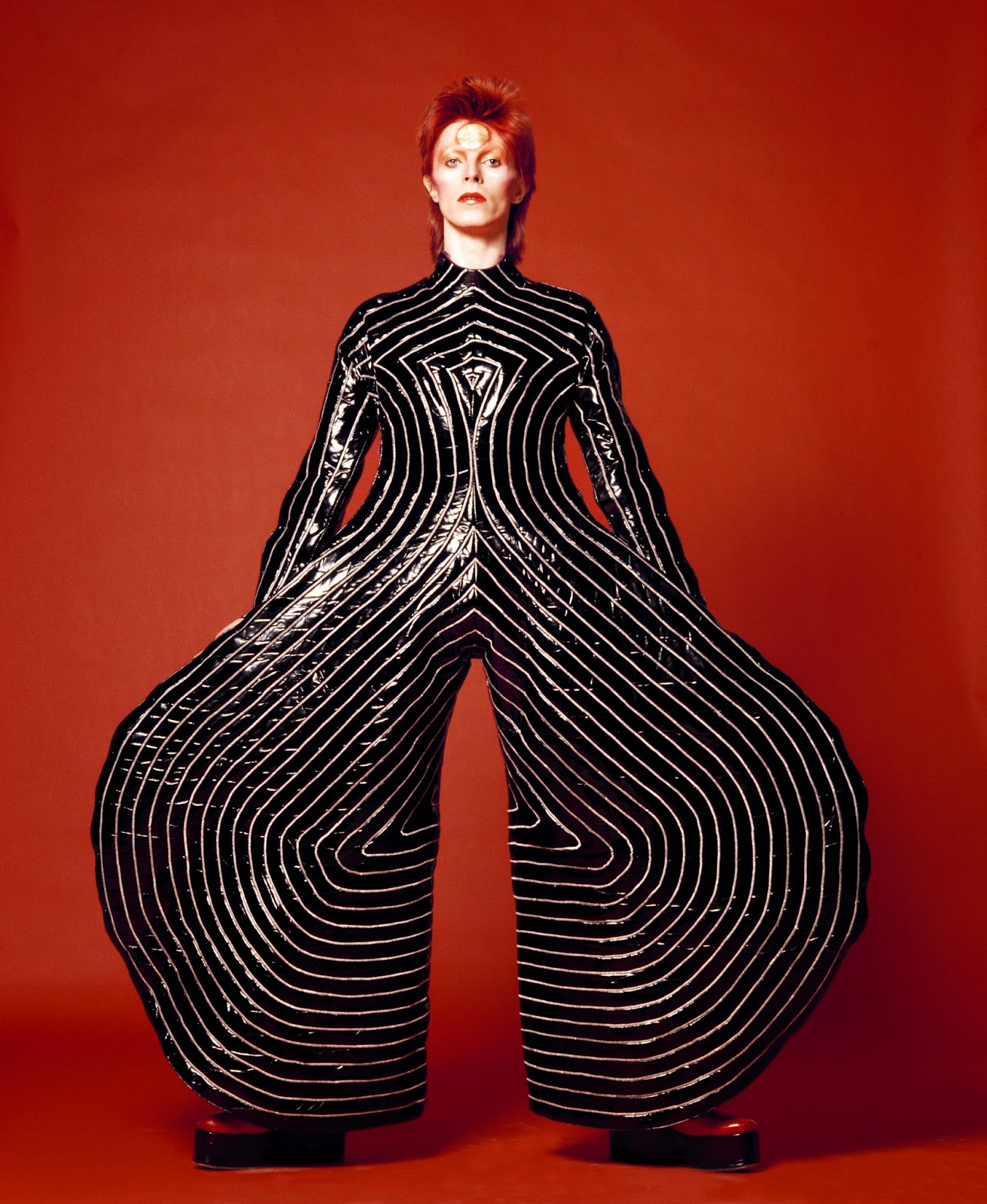 If you could see beyond the middle-of-the-road novelty pop which clogged the arteries of the early '70s charts ( Brotherhood Of Man, Osmonds, Cliff Richard, Dawn, David Cassidy  -  it really was a grim time ) there was some great music being made, and being both commercially and critically successful. David Bowie, of course, owned the year. ( Happy Birthday, by the way, Mr. Jones ) He had huge hits with The Jean Genie, Sorrow and the immortal Life On Mars?, the Aladdin Sane album was number one for 5 weeks ( this is the UK charts I'm talking about, of course ) and he infamously retired his Ziggy Stardust persona at the end of his UK tour in July, to the sounds of wailing school girls... and boys. 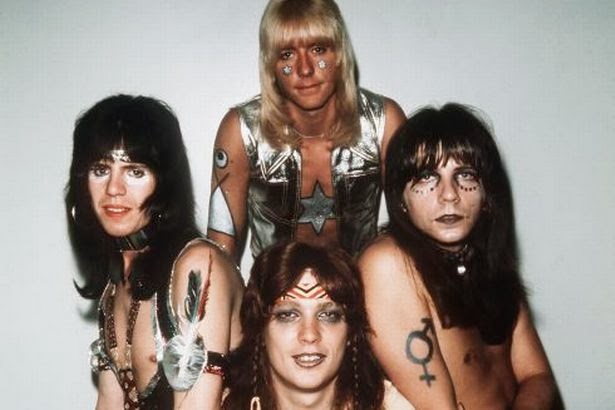 TBH at the time I was less aware of Bowie than I was of bands like The Sweet, who seemed to be on Top Of The Pops every week, pounding out their hammy, glammy foot-stomping anthems like Blockbuster, Hellraiser and Ballroom Blitz. They looked like a bunch of brick-layers dressed as the most unconvincing transvestites ever... but I thought they were amazing. And, of course, there were the mighty Slade too, with their terrace-chant tunes, glitter-ball hats and humongous sideburns. They may not have been able to spell properly ( Skweeze Me, Pleeze Me? ) but they were unrivalled at smuggling hard rock into the lives of pre-teen British kids. 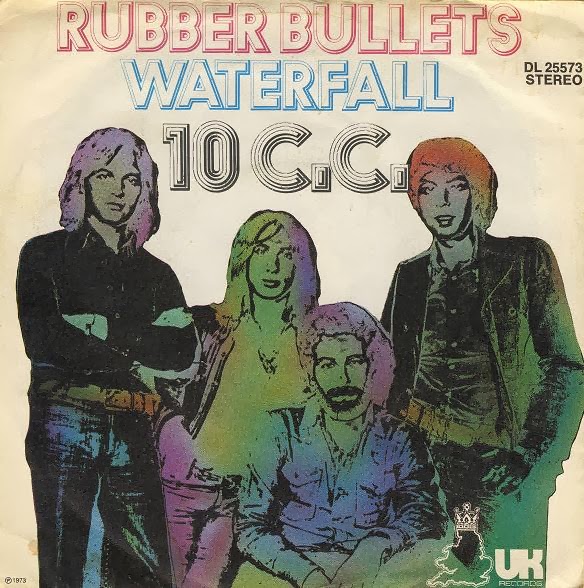 And the Glam sound reverberated throughout the best singles of 1973, from arty popsters 10CC's Rubber Bullets to the epic Live And Let Die from Wings and See My Baby Jive from Roy Wood's Glam-meets-Spector project Wizzard. Over in the Big Apple they had their own take on the greasepaint-plus-sequins-plus-riffs style in the form of the proto-Punk New York Dolls, but they were unfortunately ahead of their time and didn't trouble the charts. 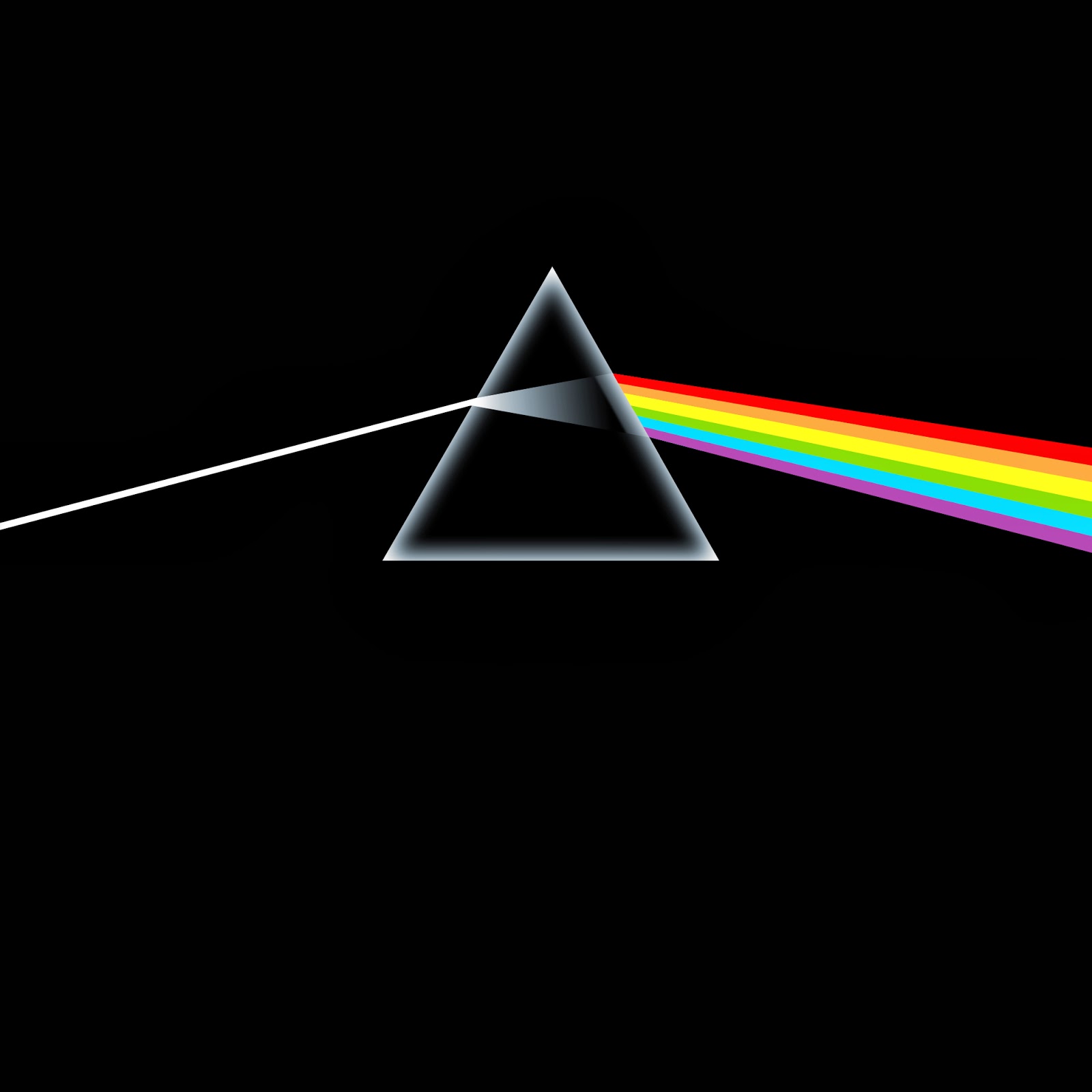 1973 was also the year of what is still one of the greatest albums of all time, Pink Floyd's all-conquering Dark Side Of The Moon. The stereo-system-testing, existential stoner-rock of Dark Side is one of the most important records in my life and I probably need to do a separate post about it. In fact, it should have popped up by now in the long-dormant 15 Albums if I'd kept it going. Maybe I'll revive it... 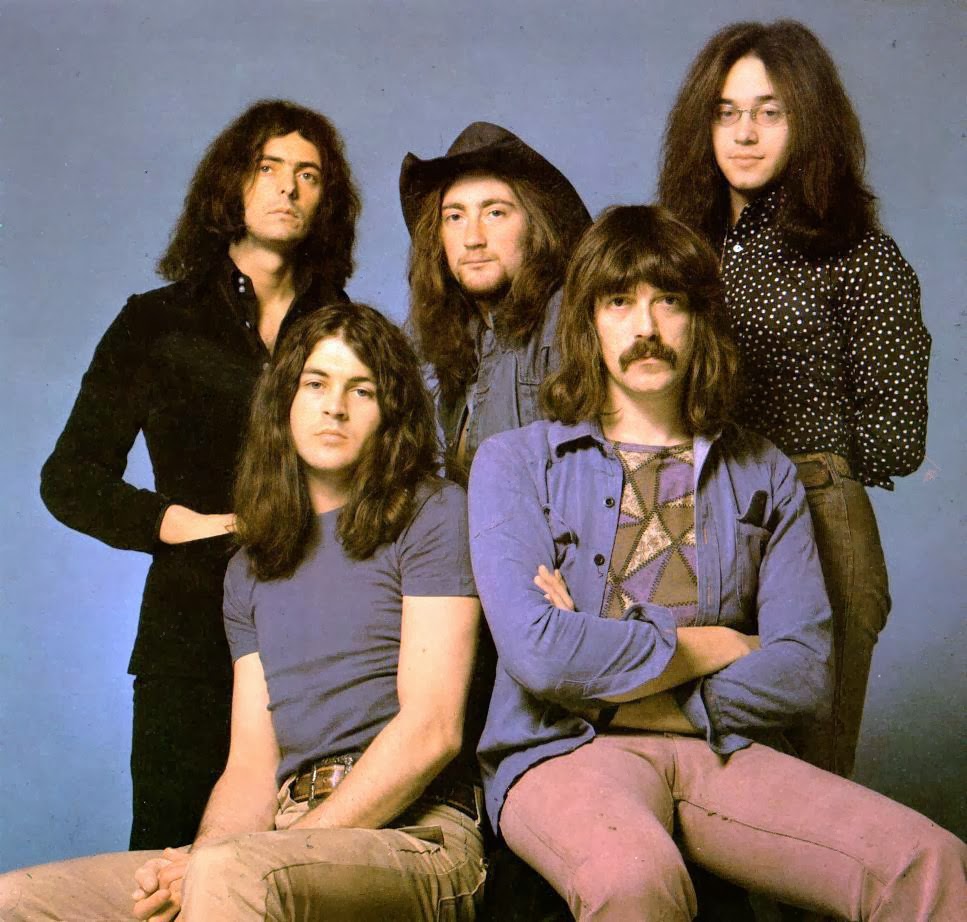 Rock of the hairy-chested, macho kind was, of course, the biggest seller of the time with only a few 1973 bands like Deep Purple ( Woman From Tokyo ), Led Zeppelin
( Over The Hills And Far Away, No Quarter ) and Thin Lizzy ( Whisky In The Jar ) managing to stand out amongst the denim-clad, patchouli-scented crowd. But it wasn't all heavy duty stuff... Former member of the Velvet Underground, Welsh virtuoso John Cale released one of the strangest albums of the decade. Paris 1919, with its surreal lyrics, mannered art-rock and nostalgic sense of longing sounds as out of place and yet timeless today as it must have done back then. A few years ago I bought this on vinyl for a quid at a church fete of all places, and fell under its baroque spell. Spine-tingling, baffling, beautiful  -  every record collection should find a place for it. 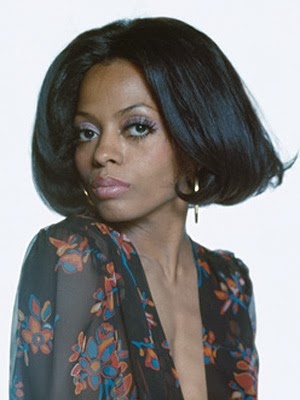 Away from the world of white boys with guitars the ever-awesome Diana Ross released a couple of her most famous singles, the yearning All Of My Life and the monumental, heart-breaking Touch Me In The Morning. This latter song was much played when I was in my late teens, during and after a three-year relationship which had many ups and downs before it finally disintegrated. The song still recalls those days of nearly ( gulp! ) thirty years ago and still brings a lump to my throat... 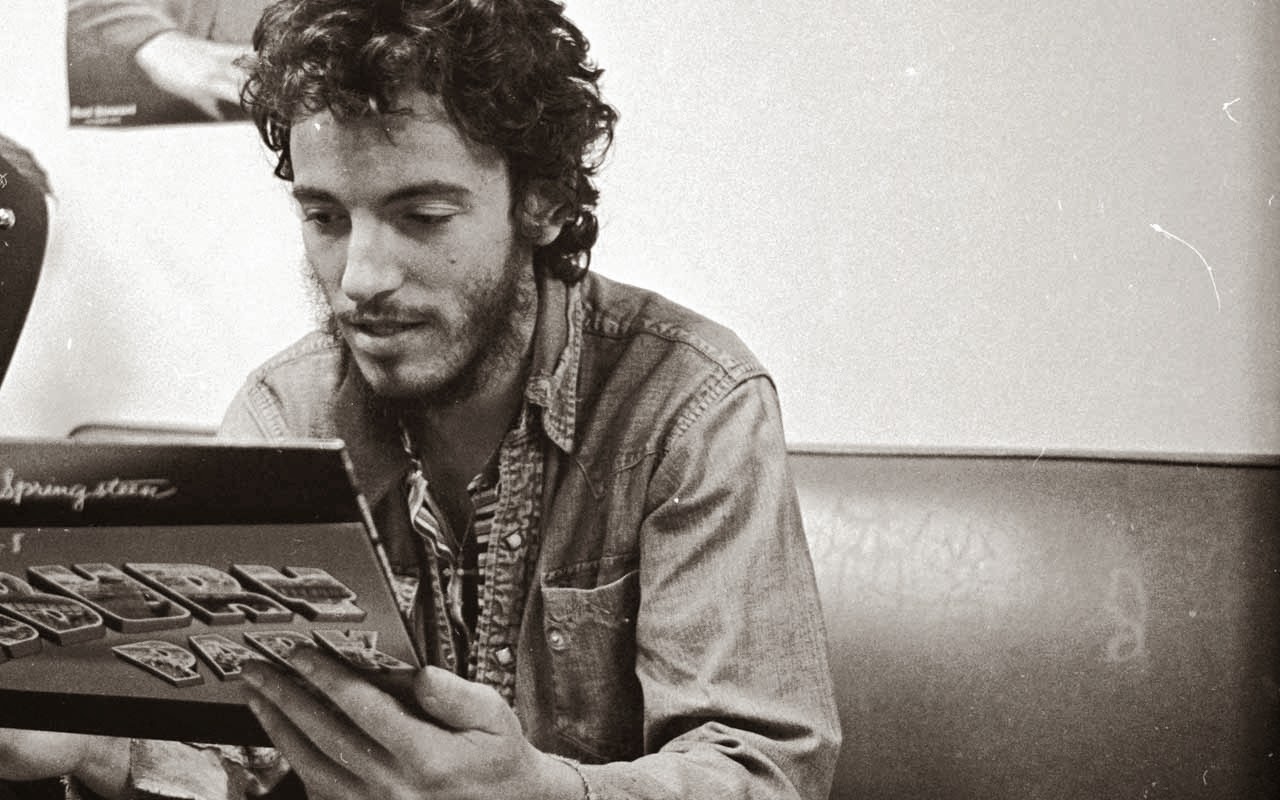 Meanwhile, a young rocker by the name of Bruce Springsteen released his first two albums to critical acclaim but a massive shrug from the record-buying public. It wouldn't be until the release of his epic third album, Born To Run, that Springsteen would have his breakthrough but many of these early songs like Blinded By The Light and Growin' Up made his reputation and set him on the road to superstardom. Dear reader, you've heard me yak on about Brooooce many times before ( check out the "Springsteen" label in the sidebar ) so I won't say any more, except to remind you that I stood stone-like at midnight, suspended in my masquerade, I combed my hair until it was just right and commanded the night brigade. Well, actually... that was Bruce, not me...
I've probably forgotten a load of great music from 1973 that I should have included ( like Steely Dan's Reelin' In The Years which just popped into my head ) but the above are the songs / albums that immediately spring(steen) to mind. A lot of them I wasn't aware of at the time
( only being six years-old in that far-off and far-out year ) but caught up with years, and even decades, later. So, after comics and music of 1973... I suppose films must be next... watch this space.
Oh, and I'll just leave you with something totally uncool but wonderful all the same:

Forty years ago was actually January 1974... by which time glam had passed its peak - Bowie had laid Ziggy Stardust publicly to rest, the TOTP glammers had mostly had their biggest hits... Likewise the progessive crowd had had their moment, Pink Floyd, Yes, ELP etc would spend the next few years still big but coasting on previous achievements and/or struggling to come up with something new. (Pink Floyd basically attempted and dropped a couple of albums before they followed up Dark Side.) It was the beginning of a period of transition - not that there wasn't a lot of good music still around...

@Mark
The subject of the former Paul Gadd is a tricky one. Like most kids my age I was a huge fan of G. Glitter but the revelations about his offences have swept his music under history's carpet. I actually saw him live at the old Gloucester Leisure Centre and it was one of the best gigs ever. But... I'm not going to give the old perv space on my blog...

@Joe
Thanks for the comment! I am cheating slightly by talking about 1973 at the start of 2014, but I've meant to do these posts for months ( and should have done them earlier ) and I don't want a little thing like time stopping me :-)

I missed glam entirely the first time--as did many of us here in the states. I knew Bowie and had his early singles but didn't know what to make of him sometimes. Never heard of Gl*tt*r at the time and only discovered the Sweet and Slade and Mott and the others over the years since.

Hi Steve! Glam did seem a mostly UK-based phenomenon, albeit a very short-lived one. As Joe says above it was pretty much all over by the end of '73. Many of the artists involved tried to move on but didn't really have any staying power beyond the funny clothes and greasepaint. Like that Bowie bloke... whatever happened to him?
:-)

I try to keep Gary Glitter and Paul Gadd separate. Gary Glitter was born in 1972 and died in 1998. Paul Gadd may be safely ignored.
Still, I respect that your opinion is the more common one. We used to go and see Gazza every Christmas at the University of East Anglia throughout the 80s, and they're still some of the best gigs I've ever seen.

Great round-up. I wasn't born until 1974 but I grew to discover a lot of the period's music through the record collections of my older brother and cousins. Out of interest, have you ever heard Bowie's version of Springsteen's "Growing Up" (available as a bonus track on reissues of "Pin Ups"). He was an early champion of Springsteen and also did "Hard To Be A Saint In The City". I weirdly prefer Bowie's versions of both songs.

@Mark
I'll have to agree with you that G*ry was a hell of a showman back in the day. When I saw him live he did the whole James Brown being-dragged-off-stage-under-a-cloak routine and had us all merrily chanting "Leader! Leader!" It's just a shame that the memory's been tainted...

@Jon
Thanks! I've actually never heard those Bowie tracks, although I've wanted to for a long time. Whenever I see "Pin Ups" for sale, it's always the bare-bones version, without "Growin' Up"... I suppose I could trawl You Tube for it...