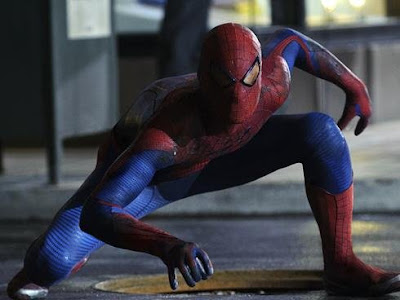 If you've been reading super hero comics for as long as I have, you get used to two things: 1. people asking "You don't still read that crap?" and 2. seemingly endless reboots, re-imaginings and resurrections of long-running characters. And so it goes with silver screen supers too. I was initially dubious about the idea of Sony rebooting the Spider-Man franchise so soon after Sam Raimi's trilogy. Did we really need yet another version of Spidey's origin story? Couldn't the new director, the appropriately-named Marc Webb, just Recast And Carry On? Well, apparently not. 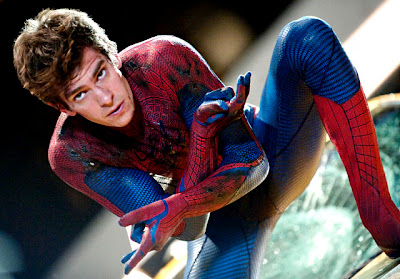 The good news is this latest version actually works. ( In my humble opinion of course. ) Many elements of the story and character ( Spidey's wise-cracking, the mystery of Peter's parents, the non-biological web-shooters ) hark back to the original Lee/Ditko/Romita days... which is fine by me. Marc Webb may not have Raimi's hyperactive, idiosyncratic vision but he can certainly frame a decent shot and can show off our friendly neighborhood web-slinger at his spidery best in the action scenes, while not being afraid to slow the pace to allow the characters room to breathe.
I'm still not totally convinced by the look of the costume: it strikes me as too fussy and over-designed after the simpler version in the previous movies, but ( despite the photo above ) at least Andrew Garfield keeps the mask on longer than his predecessor. It's always bugged me ( hah! ) in super hero movies when the main characters are so careless about their secret identities that they'll unmask in the middle of a crowded city and expect not to be recognised. I blame the actors :-) 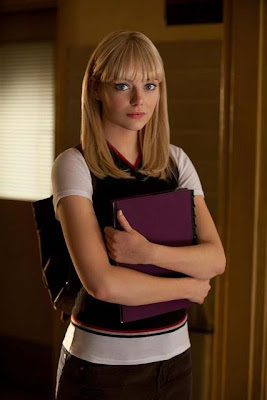 Oh yeah, the actors. Brit Andrew Garfield is a gawky, moody Peter Parker - not as nerdy as Toby Maguire's take on the character, but still a convincing outsider, with a note-perfect American accent. Emma Stone is a perfect fit for the caring, compassionate Gwen Stacey. She brings a real warmth to a relatively under-developed character. The scenes between the two "teen" characters are beautifully underplayed and believably awkward.
The older members of the cast are fine too. Martin Sheen, Sally Field and Dennis Leary are all perfectly cast as the harassed adults struggling to deal with heroes, villains and teenagers, while Rhys Ifans makes a convincingly driven, one-armed scientist as Dr. Curt Connors, but is less confident as generic villain, The Lizard.
So, I'd award this movie Three Out Of Five Web-Shooters as a solid introduction to the new series, especially for the pairing of Garfield and Stone, but I'd like to see something a bit more er, Spectacular next time... 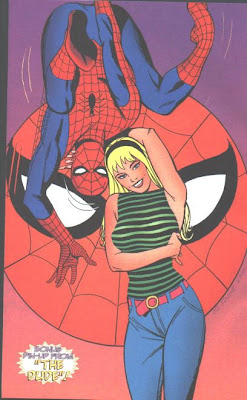 I'll leave you with this lovely, retro-styled look at Spidey and Gwen by Steve "The Dude" Rude.
Posted by cerebus660 at 21:19

As you say, why not just recast and carry on? However (not having seen the movie yet), I'm glad to hear that the web-shooters are non-organic. The idea that Spidey could produce that much webbing from his body as and when required was stretching things a bit. At least a pseudo-scientific explanation for artificial webs can cover a multitude of improbabilities.

Also, I never bought into the idea that Spider-Man's powers were 'shaped' by the spider-bite. To me, it was the radioactivity in the bite which gave him his abilities, which just happened to superficially resemble that of a spider's. Strength, ability to walk up walls, sense of danger, etc.

In fact, maybe Peter's powers were potentially limitless and hampered only by his lack of imagination. "I was bitten by a spider, so I must have a spider's powers." No, meathead - you can develop whatever powers you're capable of thinking of - you just need to be able to invisage them. Too late now, of course - his metabolism is now established after all these years.

Hey, I should be writing these darn comics.

There was a controversial attempt a few years back to change Peter's abilities etc.in JMS's "The Other" storyline...
which seems to have been conveniently forgotten in recent issues...