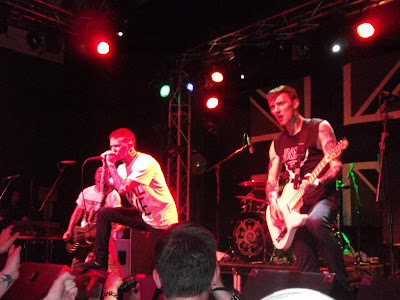 Last night UK Punk upstarts Gallows brought their own brand of chaos to Gloucester's Guildhall...
I missed the first support band ( they're called Thirty-Three, apparently ) but caught the next band, Bastions. They make a sound like a passenger-jet full of screaming gorillas crashing on your head, have song titles like Misery King and Nausea, and lyrics like "From the womb spew forth the dogs of war and kill the king." Lovely! To be fair, they are pretty impressive at what they do, which is a kind of Metal endurance test with constant tempo changes and crushing rhythms, and feature a frontman ( I hesitate to use the word "singer" ) who hurtles around the stage as if he's having a heated argument with himself. And losing. Which is all fine but I do wonder why they couldn't also include the occasional hint of..... I don't know, melody? I know I'm obviously an old fuddie-duddie who should be put out to pasture or sent to the glue factory, but I do find this kind of music joyless and sexless, and so lacking in light and shade that the endless aggression becomes a bit..... dull.
Anyway, next up are the tattooed Punk/Metal hooligans themselves, Gallows..... 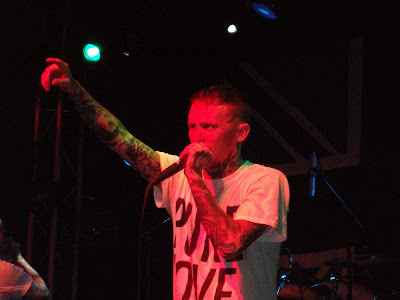 And the crowd goes mental. The capacity crowd at The Guildhall are instantly drawn into the insane world of Gallows' frontman, Frank Carter. He sings/screams/shouts about how dark it is inside the belly of a shark, how violent London is for young Punks on the make, and how he dreads the night but loves misery. He gets the crowd to sing "Happy Birthday" to his girlfriend down his smart phone, orchestrates the building of a human pyramid on the dance-floor and encourages us to crowd-surf and stage-dive. The Guildhall security guys look daggers at him and pick bodies off the floor. It's all good-humoured, sweat-and-beer-drenched chaos. Frank has the audience in the palm of his hand and they love it. "You guys are the future of music" he tells them. Bless 'im. 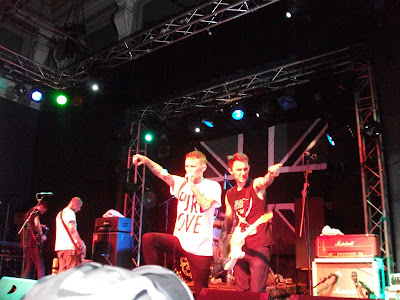 The music is rifftastic Hardcore Punk with a Metal edge, recalling bands such as Black Flag and Minor Threat, but with a distinctive UK viewpoint. In fact, Frank's broken-glass-gargling vocals bring to mind early '80s Anarchist Punks like The Subhumans or Conflict, even though the lyrics aren't a million miles away from the more modern, London-nightlife-is-shite songs of Plan B, another tattooed tearaway with a big heart. It's all the more of a shame that Frank is leaving the band after this tour, citing that old favourite, musical differences :-( 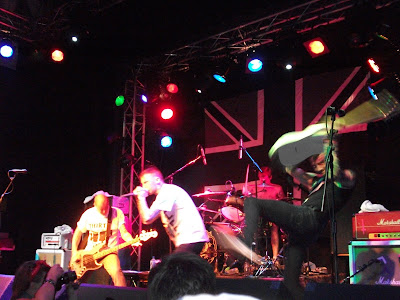 It's an intense, intoxicating, celebration of being young, angry and out for a laugh, but not being a bonehead or a fake. It works for certain forty-somethings too..... 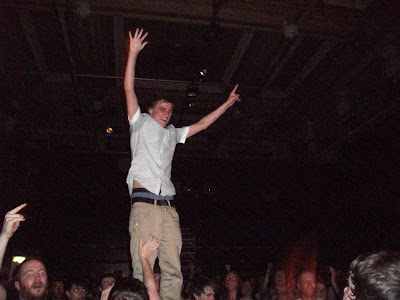 I left it too late to get and a ticket, and they sold out. Bugger! Shame about Frank leaving though, I think he'a areally charismatic frontman. They won't be the same without him

It's a shame you couldn't make it, Mark. It was a good laugh, if completely manic! I was talking to someone from the band on F/Book the other night and they insist they will carry on without Frank, but I doubt they will be as exciting without him...
Hope you and Em are well...

Looks like another good night mate, shame lack of funds and old age got the better of me and I missed it. Next gig that comes up count me in!

I'll see you down the front, mate!

You're officially on Blogger, then? When are you gonna start blogging? You know you want to...

Hey, my mate does the press for these guys. Glad you dig em!

Thanks for the comment, Judd. I certainly enjoyed seeing Gallows - it's just typical of me to get into a band when they're on the verge of splitting up :-(