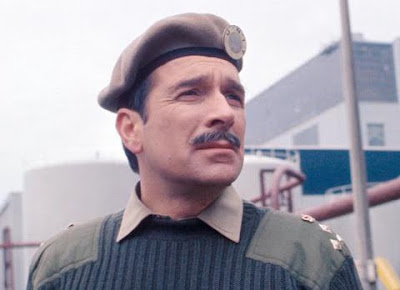 I was very sad to hear today of the passing of Nicholas Courtney, known to Doctor Who fans the world over as Brigadier Alastair Gordon Lethbridge-Stewart, or just "the Brigadier". Mister Courtney's character was an essential part of Doctor Who in the "UNIT Years" of the early '70s and one of the best-loved characters in the show's long history.

Nicholas Courtney was a highly-regarded actor, a tireless ambassador for Doctor Who and an advocate of the actors' union, Equity. I never met him myself but I did see him at a fan gathering in a pub in London for the launch of the 2007 season of Doctor Who. As Courtney entered the room people clapped, stood to attention, saluted, called out "Brigadier, sir!" and flocked around the great man to buy him drinks and listen to his stories. And he loved it as much as they loved him.

The Brig will be sadly missed. Here he is with the second Doctor, the late Patrick Troughton:

Email ThisBlogThis!Share to TwitterShare to FacebookShare to Pinterest
Labels: Doctor Who, obituary, TV

I had the very good fortune to meet Mr. Courtney back in the 1980's in Bellingham, Washington. He was a fine actor and was, indeed, a splendid fellow. He will be sadly missed.

Thanks for stopping by, M.D.

I grew up with the "UNIT family" of the Jon Pertwee Doctor, Jo Grant, the Brig etc. so I find it particularly sad that we've lost another fine actor who meant so much to me in my childhood.

Jon Pertwee was the first Doctor I ever watched on the CBC back in the day. (Sarah Jane was the companion then. I caught up with the Jo Grant character much later) The Brigadadier has always been one of my favourite characters.

I am working my way through the week with classic Who (namely the Pertwee era) for the Brig and in Nicholas Courtney's memory.

Glad to have seen him on TSJA last season, too.

I checked out a few Brigadier clips online last night, and also watched a bit of The Green Death - some lovely, funny scenes there between the Doc, the Brig and Jo.