Doctor Who: The Eleventh Hour ( review with added spoilers ) 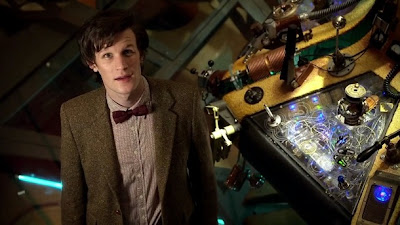 "An alien convict is hiding in your spare room, disguised as a man and a dog, and some other aliens are about to incinerate your house. Any questions?"
The Eleventh Hour is the story of Amelia ( later Amy ) Pond, the girl who waited, and the Raggedy Doctor who returned to save her. It's Steven Moffat's regenerated Doctor Who: new leading actors, new title sequence and theme music, new Tardis, new bow tie, new adventures in time and space. 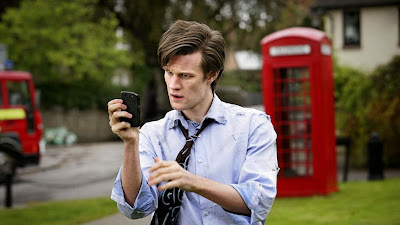 The Atraxi: "You are not of this world!"
The Doctor: "No, but I've put a lot of work into it..."
First things first ( and that's a really dumb phrase when you think about it ) - the 11th Doctor is here! Matt Smith is a delight as the bonkers, uncoordinated, reckless new incarnation of our favourite Time Lord. He absolutely nails the part in his first appearance, equally at home sharing fish fingers and custard with young Amelia, or facing down an alien eye-in-the-sky, or racing around an English village like a demented giraffe. No doubt his take on the Doc will be plagued with the familiar whinges for a while - "he's too young", "he looks weird", "he's not David Tennant" - but for me at least he da man! And that scene on the rooftop, where the multi-tasking Doctor chooses his new look, frightens away scary alien bounty hunters and reminds us of past glories, all at the same time, is sure to go down in Who-history as a classic moment. 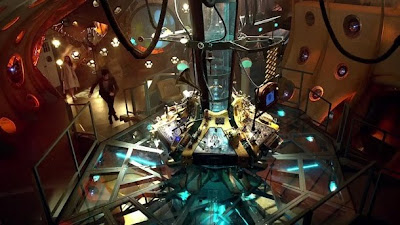 OK, what else?
The good: I love the new Tardis interior, with its Jules Verne meets Willy Wonka vibe; the hints of things to come - the Pandorica, "Silence will fall...", the cracks in reality - are tantalising; the whole fairy-tale look of the show, especially night-time scenes, is wonderful - as in the actual sense of wonder - something lacking on our telly screens of late; the new title sequence, while not as innovative as I might have hoped, is a perfect introduction to the show, and I definitely prefer the new logo to the old.
However, that brings us to..... 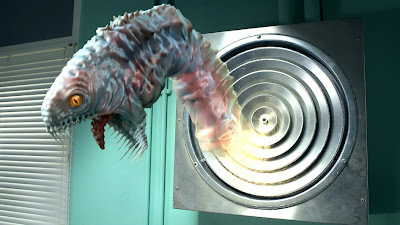 The not-so-good: The revamped theme music is a let-down - for the first few bars the music is unrecognisable, but when the familiar refrain kicks in it seems too bland, all the mystery drained from it. Hopefully it'll grow on me.
The villain of the piece, Prisoner Zero, is fine in shape-shifting, human-imitating mode ( especially as played by the wonderful but under-used Olivia Colman ) but is a dud in ropy CGI snake-thing mode. Shades of the Mara!
But these are minor quibbles. The episode was great fun and a fine introduction to the new team. Speaking of which, and last but not least ( another dumb phrase! ) we come to:
The Doctor: "Amy Pond, the girl who waited. You've waited long enough."
Karen Gillan is great as Amy, the girl who waited for her Doctor to return. And waited. And waited. It'll be interesting to see how their relationship develops: Amy has known the Doctor all her life but he let her down by disappearing for 12 years - and then another 2! She's joined him on his adventures through time and space but won't take him for granted and is certain to challenge him when he needs challenging. There's more for us to learn about Amy and her life and there are hints that the Doctor knows more about her than he's letting on. This is obviously a thread that will develop throughout the season: I can't wait! Karen Gillan's performance in this first story is fiesty, sassy etc. etc. ( you know - all the usual companion cliches ) but also subtle. Watch her facial expressions when dealing with her "boyfriend" Rory, or when downplaying her kiss-o-gram "work" or her "Raggedy Doctor" childhood stories. Subtle and funny. Karen Gillan is definitely an actress to watch, so I'll finish with a totally gratuitous photo of the lady herself, wearing not very much..... 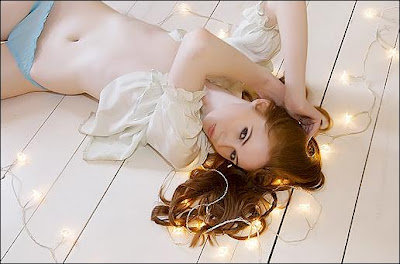 See you back here next week for The Beast Below.
Posted by cerebus660 at 01:02

I'm waiting anxiously for this to show up on BBC America in the next couple of weeks.

And when it comes to it, I'm buying TWO Amy Pond action figures, one to be Amy and one to pretend to be Liz. :D

Thanks for posting about The Eleventh Hour - I'm looking more forward to it now than ever!

Thanks for commenting, Mickey. I hope I didn't give too much away about the new episode - that's always a worry when viewers in other countries have to wait for UK programmes.

I'm never one to mind too much about spoilers, either reading them or spilling the beans. The latter's gotten me into some hot water in years past, but meh. =)