Set the controls for Inner Space 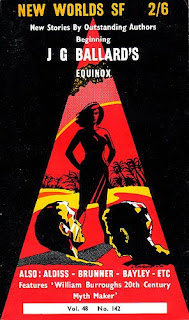 So I turned on Channel 4 News last night to hear that JG Ballard had died the day before. Bad news. Ballard was one of the most important writers of the last 50 years, a first-rate SF author who went on to conquer the so-called mainstream with his unblinking view of the modern world.
In the May/June 1964 issue of New Worlds magazine Ballard wrote an article about William Burroughs, called "20th Century Myth Maker", in which JG praised Burroughs for creating "the first authentic mythology of the age of Cape Canaveral, Hiroshima and Belsen." Ballard could very well have been talking about himself. His world of grim tower-blocks, deserted swimming-pools, sterile business parks and rainswept motorways is our world, no need for SF trappings. His lost, self-destructive characters inhabit a recognisable media landscape of the late 20th / early 21st century. I'm sure Ballard would find it ironic and fitting that most obituaries seemed to concentrate on his filmed novels, Crash and Empire Of The Sun, because they were more readily recognisable and assimilated into the culture. Top marks to Martin Amis who spoke eloquently about his friend Ballard on the aforementioned Channel 4 News and managed to sideswipe Jon Snow's dumb, superficial questions.

On a lighter note, a big Hello to new Follower, Continually Spicy. This blog is still in semi-hibernation but I hope you can find something worth reading here. Stay spicy!
Posted by cerebus660 at 17:09