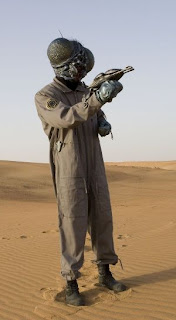 This handsome gent is apparently a Tritovore from the Doctor Who Easter Special, Planet Of The Dead. Hmmm. The general consensus on the space we call cyber is that it looks too much like a reject from some 1950's B-movie. Well, yeah, but I'm ready to give it the benefit of the doubt: it does look pretty cheesy but is that such a bad thing? Nine-year olds across the country will probably love it - I'm sure mine will. Russell the T has said that there are two alien races in this Special, so maybe we'll see a spider in a trenchcoat as well.
Soundtrack: 9pm ( Till I come ) by ATB.
Lady ( Hear Me Tonight ) by Modjo.
What's with all those crazy brackets? (?)
Posted by cerebus660 at 23:50