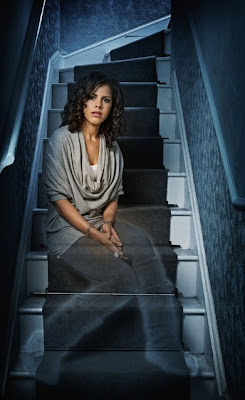 The first series of Being Human ended tonight, with an action-packed and moving episode which rounded off this series nicely and laid some groundwork for the next.
George, Mitchell and Annie made their stand against Herrick and his vampire army but, ironically, seemed to distance themselves even further from humanity in the process. George became more accepting of his hairy alter-ego to the point of using it as a weapon against Herrick; Annie's fury at the seemingly impossible situation they found themselves in brought her poltergeist powers to the fore; Mitchell drank the blood of an old lover to heal himself and to end her suffering. All three have changed over the course of the series, but in a very organic way as part of the story: not just change for its own sake.
As ever the script and acting were spot-on. I'm still underwhelmed by the rather plasticky werewolf, but maybe the second series will bring a bigger budget and some Pedigree Chum for George.
Soundtrack: Werewolves Of London by Warren Zevon. ( Obvious, I know. )
Posted by cerebus660 at 23:04

Email ThisBlogThis!Share to TwitterShare to FacebookShare to Pinterest
Labels: TV