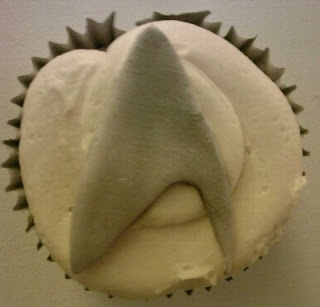 Today's recipe: a Starfleet cupcake.
Loads of new Star Trek images and spoilers on the net today, following JJ Abrams' presentation in Leicester Square. ( I presume this was in a cinema, not chalk drawings on the pavement. ) I was never a real fan of ST, only really the Original Series, although Deep Space Nine had its moments. The forthcoming movie does look interesting but has incensed some hardcore fans who are furiously blogging about continuity blasphemies. Bless 'em. It looks like Abrams and co. are going the Doctor Who reboot route: keep the essentials of the legend, chuck out unnecessary baggage, aim for a wider audience. I haven't seen a ST movie at t' cinema since The One With The Whales in 1980-something, but I might make an exception for this one. Which must be the desired effect of all the hype.
Endblog 4.
Soundtrack: Metal Firecracker, Lucinda Williams.
I Was In The House When The House Burned Down, Warren Zevon.
Live long and prosper.
Posted by cerebus660 at 23:33