Albums Of The Decade ( Part Two )

Okay, it's March already. How did that happen? Way back in the wastelands of 2020 ( is it always going to be painful to write that sequence of four numbers? ) I began to list my favourite albums of the last 10 years. Here's part two for anyone who wants to laugh at my musical choices: 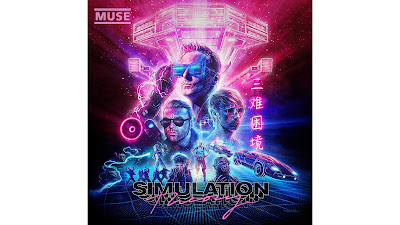 I've always liked Muse and, although Sarah is more of a fan than I am, seeing them play live a couple of times in the last few years has increased my admiration for the boys from Devon. Their music is a very slick, supremely well-played amalgamation of metal and prog, shot through with Queen-like bombast and slightly dodgy old science fiction ideas. Simulation Theory jams all these elements into its grooves but also adds a huge dollop of '80s synth-pop which makes it easily my favourite Muse album. There are some absolutely huge tunes here from the Gospel-inflected Dig Down to the appropriately catchy Thought Contagion and the pop-metal juggernaut of Pressure. All these songs are powerful and effective, even when divorced from their stage-show special effects.

The Brit Pop era was a massively important time for women in indie music; so many talented females comprised and /or fronted great bands that went toe-to-toe with the more laddish types  -  Echobelly, Garbage, Elastica, Curve, Kenickie and Lush all kicked against the pricks and one of the most successful of these bands was Sleeper. After three albums of sassy, breathy pure guitar-pop, Louise Wener and her "Sleeperblokes" ( TM the NME some time in the '90s ) went their separate ways... until this 20th century reunion which was a long-overdue delight. A slight update to the original Sleeper sound but still that knack for a well-turned lyric and contagious chorus made this album, very possibly, the best thing they've done so far. Let's hope for more soon.

A quietly beautiful amalgamation of Folk ( KC ) and electronica ( JH ) with ruminations on getting old, family squabbles and life at sea on Scottish trawlers. Kenny Anderson's vulnerable, Caledonian vocals float effortlessly over layers of acoustic guitars, found sounds and Hopkins' harmonium on such sublime songs as John Taylor's Month Away and Bats In The Attic. Absolutely haunting.

This eclectic album from the ultra-talented Angel Olsen veers from the electronic torch song of the first track, Intern, through garage stompers like the Courtney Barnett-esque Shut Up Kiss Me to the Country Rock epic Sister, all held together by her soul-baring lyrics and keening, gorgeous vocals. Easily some of the most deeply moving performances I've heard in recent years. "I want to live life / I want to die right."

After their A-Z Singles project when they'd announced that the album as a vehicle for music was dead, Northern Ireland's greatest pop/rock/punk/ metal band had a re-think and came back with this outstanding set of songs. As good as anything else in their career, Kablammo! saw Ash producing such classic power-pop singles as Cocoon and Bring Back The Summer, while Let's Ride and Evel Knievel showed they could still rock out with the best of them, and Free was just a beautiful, string-assisted Tim Wheeler ballad about escaping a toxic relationship. I had a ticket to see Ash play live in Bristol last March but, of course, the pandemic stopped that from happening like it put so much of our lives on hold. I'm really hoping that their "Teenage Wildlife" tour will be rescheduled... and Free will take on a whole new relevance.

Another comeback album, this time from James Murphy's electro-pop outfit who had famously split up in 2011, making a big noise about it, and then apologetically reformed only four years later. Luckily, the result was worth it as American Dream is every bit as good as their previous output. Full to the brim with their retro-synth-driven Bowie / Talking Heads art rock and featuring the absolutely massive single Call The Police, it's a monster.

Given To The Wild  -  The Maccabees

With their melancholy lyrics, existential themes, beautifully smooth production sounds and propulsive guitar playing, the late lamented Maccabees almost turned into an indie Pink Floyd on this wonderful album. Which is a good thing.

Can I use the word "comeback" yet again? Yes, I think I'll have to, as this album saw the return of the notoriously fractious Reid brothers who had buried the hatchet ( hopefully just figuratively ) long enough to go out on a couple of tours and produce some songs together for the first time in what seemed like several ice ages. Sticking to their tried and trusted formula of distorted rock 'n' roll fatalism, Jim and William showed there was life in the old dogs yet with such typically obnoxious tracks as All Things Must Pass, Mood Rider and Amputation ( "I'm a rock 'n' roll amputation" Of course you are, dear ). They also still have a way with a fuzzed-up girl-group ballad which Always Sad and The Two Of Us prove perfectly. Yes, it's a formula, yes, they're sticking to it and, yes, it's still fantastic.

Lost In The Dream  -  The War On Drugs

Okay, hear me out. What if Bob Dylan took a shed-load of mushrooms and recruited the E Street Band to back him on some windswept AOR epics that all went on for precisely forever? Yeah? Well, that would seem to be the thinking behind Adam Granduciel's psychedelic Americana on this towering album. And it works, it really works. Man.

Along with The Maccabees, The Sunshine Underground are one of those bands who, in a just and fair world, should have been absolutely massive. Their sky-scraping Nu Rave dance epics like Start and It Is Only You were tuneful, propulsive and all-inclusive and they were a massively fine live band. I saw them a couple of times and grinned from ear to ear throughout both performances of their positive-vibe-filled indie-dance-pop. ( That's a lot of hyphens! ) I was gutted when they announced they were splitting up but Sarah and I were lucky enough to catch them on their final tour at Bristol's iconic Thekla. As I say, in a better world, they would have been megastars. But of course we're living in a world where, instead, Ed Sheeran is a megastar. Aren't we lucky?

So, there you go, another 10 great albums which are guaranteed to make you even cooler than you already are whilst you listen to them. And you're pretty cool already, am I right?

Hope you and yours are keeping well. Hard to believe we are hopefully on the way back to some sort of normality.

Sad to say I struggle to add many albums to my last list, and looking back so many are albums from by artist from my younger years. These last two are no exception. Not that I don't like new music I just don't buy a lot of LPs now and tend to listen to tracks despite still going to gigs pre lockdown

Nick Cave Ghosteen.It must be my age as some of my favourite albums (Bowie's Black Star) are based or inspired (if that's the correct word) on death. In this case the untimely and devastating passing of Nick Caves teenage son. It's more accessible than the stunning Bowie Blackstar album but is as equally relevant. Just sad such an awful event inspired such a good album.

Glen Campbell. Ghost on a Canvas. Ok old school even for me but Campbell was a great musician and sang some of the greatest songs of the country and AM genre . Released just before it was announced Glen had Alzimers disease this is a really joyous album from a true musician still at the top of his game. Some lovely songs and although his voice at time sounds weak it's a great melodic LP full of wonderful tracks.

Hi Paul. We're all well, thanks, hope you are too? There's definitely some light on the horizon ( Sarah and I have both had our first jabs! ) but we're still going to be verrrry careful for quite some time to come...

Nick Cave is an artist that I always think I should get into but haven't so far. I suppose the huge body of work the man's created has put me off - where to start? I really should take the plunge. Any recommendations? ( I probably wouldn't start with Ghosteen. I know it's highly praised but I don't know if I could handle it. )

I was listening to some Glen Campbell the other night! As you say, it's all very Easy Listening, but the guy had a hell of a voice. My old man used to have a GC Greatest Hits tape in the car when I was a kid so I know a few of his songs quite well. And, of course, Wichita Lineman is one of the greatest songs in pop history.

Good to hear you are all keeping well - we get our jab next week so we are looking forward to that and hopefully the loosening of restrictions soon afterwards.

I like Nick Cave in limited amounts as his stuff can be a bit morbid at times but it’s usually excellent stuff. My favourite Nick Cave and the Bad Seeds album is ”The Boatman’s Call” it’s a striped back album musically speaking with piano guitar and vocals but it is a fantastic album . "Let Love In" is another good LP with (Southern) blues and punk stylings etc – Others worth listening to are the classic “ Kicking Against The Pricks” (which I think most people over 40 have heard off even if they have not actually listened to it) another one worth checking out is “Murder Ballads" (the Kylie album)

Thanks for the Nick Cave suggestions, Paul! I'll have to try and search some of them out.