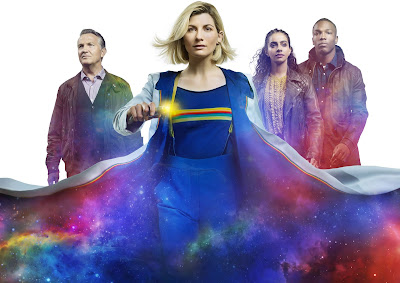 As I'm even later with my Doctor Who reviews than is traditional for this 'ere blog, I'm just going to jot down a few quick thoughts on Series 12 so far... before it's actually over... starting with

Spyfall ( Parts One & Two )
A hugely confident opening story with the Doctor and friends getting involved in all sorts of globe-trotting Bond-esque shenanigans and coming up against an old enemy. Well, it's the Master  -  not much reason for a *spoilers!* tag at this stage in the game. Some fun guest appearances from Stephen Fry and Lenny Henry ( next series French & Saunders? ), gorgeous location filming in South Africa, and the debut of Sacha Dhawan as that old Jackanapes, the Master, with a reveal almost the equal of the Jacobi / Sim regeneration in Utopia. And the fact that we share a surname with Lenny Henry's character gave James and me a few chuckles at certain lines.

Orphan 55
A slight stumble after the wide-screen adventure of the first two episodes. This story had quite an '80s vibe, even going so far as basically copying the main concept from The Mysterious Planet. Again, some impressive location filming in Tenerife and a fairly creepy menace in the shape of the de-evolved future humans known as Dregs, although this wasn't quite enough to save a weak story with under-developed supporting characters. And, if you're going to get an actress as accomplished as Laura Fraser in the show, why not give her something to do?

Nikola Tesla's Night Of Terror
Proving yet again that the, er, current production team seem far more comfortable with stories set in the past, this episode again went for the "celebrity historical" format, this time centred around the rivalry between Thomas Edison and Nikola Tesla. Featuring some fine, scenery-chewing guest performances from Robert Glenister and Goran Visnjic and a well-realised early-twentieth century New York, this was the definition of the fun, historical romp.

Fugitive Of The Judoon
In a purely selfish way, I was really looking forward to this episode, as it was set in my home town of Gloucester. As I'd suspected, Gloucester Cathedral was played by Gloucester Cathedral, while the rest of Gloucester was played by Cardiff. ( There were some very "blink and you'll miss it" shots of Gloucester Docks too. ) Not a major problem as it was still lovely to see those irascible space-rhinos the Judoon stomping around our lovely Cathedral in their search for the titular fugitive. And that fugitive turned what had seemed like a stand-alone episode into a pivotal moment in this series' story-arc ( yes, there actually is an arc this year ) because their quarry was revealed to be... another Doctor! Or is she? The introduction of the "Ruth Doctor" was a real rug-pulling event in the show and has opened up some exciting possibilities for the future. Vinay Patel and Chris Chibnall injected new mystery into the show with their intriguing script and I'm really interested in where it will all lead.
Oh yeah, Captain Jack Harkness returned too, very briefly. I'm sure we'll see him again before too long.

Praxeus
This one was a bit of a mixed bag  -  a series of seemingly unconnected deadly events around the globe forcing the Tardis Team to split up and look for solutions. The story gave us disappointingly human-like aliens, a fairly sweet gay love story, a nod to Hitchcok's The Birds and yet another environmental message ( after Orphan 55's climate-change warning ), this time centring on pollution in general and micro-plastics in particular. It also inspired me to write the following on Twitter:
Tonight's #doctorwho drinking game:
One shot every time someone is teleported
Make it a double if they're teleported against their will
A pint and chaser every time all the regulars plus guest cast are squeezed into the frame to explain the plot to each other
Good luck!

Can You Hear Me?
A long overdue chance for the human Tardis travellers to return to Sheffield to catch up with friends and family. And, of course, it all goes wrong when a creepy bald guy with detachable fingers (!) keeps popping up to feed on people's nightmares.
It was nice to see more of a focus on the companions in this story. It still feels like we barely know them. The nightmares they experienced were suitably revealing, Graham's in particular ( his cancer returning, an alternate version of Grace haranguing him ) were very affecting. The menace in this episode, the fear-scoffing Zellin, was revealed as an Eternal, another call-back to the classic show, and was a memorable opponent. And, yes, you could have felt very wobbly if playing the drinking game this episode. Which I'm obviously not endorsing. Please drink responsibly. Don't text and drive.

The Haunting Of Villa Diodati
The long-awaited Mary Shelley episode saw the Doctor and friends gatecrash the infamous night in 1816 when the Shelleys, Byron and Polidori all played the Doctor Who drinking game and told each other ghost stories. Mary, of course, came up with the immortal Frankenstein on that dark and stormy night and this was an obvious opportunity to drop the Cybermen into a historical.
A cracking episode with some suitably eerie, candle-lit horrors and entertaining encounters between the time travellers and the Romantic poets. The Lone Cyberman, as mentioned by Captain Jack, was up to no good near Lake Geneva and was soon causing moral quandaries for the Doctor... as well as snapping necks. This story gave Jodie Whittaker the opportunity to show an angrier, more forceful Doctor, facing up to her mistakes and trying to save lives she'd put at risk. Not before time  -  while the friendly, goofy side of this Doctor is fun, I don't often feel that the character is "alien" enough and this chance to give Whittaker a meatier role was appreciated. This all acted as a precursor to the two-part finale which starts tomorrow. Looking forward to it.