Sleeper / The Supernaturals / Thyla at the Bristol O2 Academy 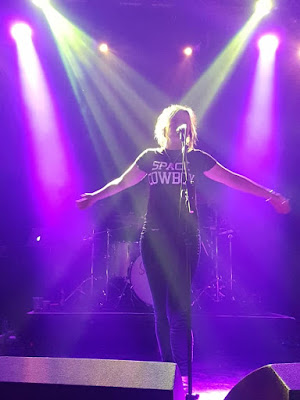 My first gig in Bristol this year and it was a cracker! An exciting up-and-coming band, the long-awaited return of some old favourites and a triumphant headline set from Britpop legends. 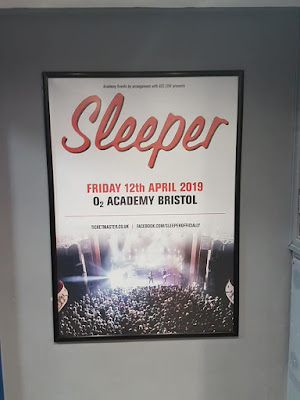 After finishing work and experiencing a refreshingly easy and traffic jam-free journey down to Brizzle I hurriedly found myself something to eat and then high-tailed it to the O2 to catch ( most of ) the set by Thyla who were on at the ridiculously early time of 6:45 pm. 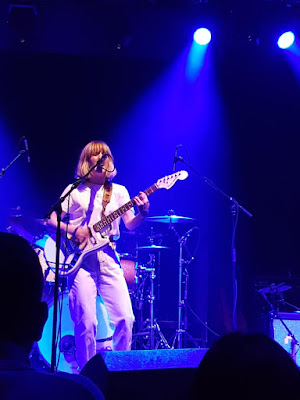 Thyla are an extremely promising young band who reminded me slightly of The Horrors  -  not that they sound a lot like them, but they have the same instinct for taking old genres ( Goth, shoegaze, '80s indie ) and giving them a modern twist. Although some of the songs seemed a bit lacking in the tune department, they were more than made up for with the urgency of the shimmering guitars and pounding, tribal drums. Front woman Millie Duthie sang like her life depended on it, her voice an ethereal cry from the heart ( if that's not a contradiction ), like a mixture of Liz Fraser and Kate Bush... but with hobnail boots on. ( Actually she wore some pristine white trainers with very thick soles. )  The last song, Pristine Dream  -   a strident denial of being pigeon-holed by male expectations  -  was a Banshees / early Cure -style stomper and is sure to propel them into the big leagues. 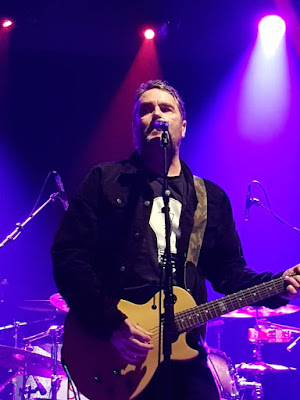 The next band were eagerly awaited by me and many others in the crowd for it was the return of Glasgow's former kings of melodic, melancholic indie-pop, The Supernaturals. I have to admit I never saw many of the Britpop bands back in the day because their rise coincided with my buying a house, starting a family, all those money- and time-consuming things which are lovely but don't leave you much opportunity to go out and watch bands. ( I think my list would only include Blur, Pulp, Echobelly, Catatonia, Longpigs, 3 Colours Red... maybe a couple of others ) But I did see The Supernaturals. Many times. In fact, they were something of a fave band at the time for myself and my mate Glenn and we always said we'd definitely catch them if they ever reformed. Unfortunately, Glenn couldn't make it to this show as he was gigging himself that night with the mighty Borrowed Time, but I knew I couldn't miss it. 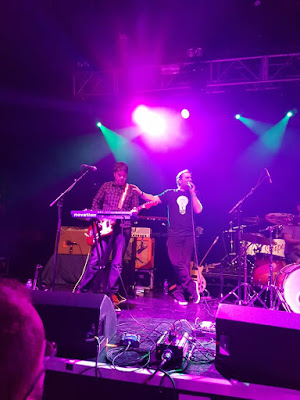 The band shuffled on stage and started the set almost apologetically with the low-key hymn to "bitterness and inadequacy" Trees. Maybe not the most exciting of beginnings but the set slowly picked up as singer James McColl warmed to the audience ( and vice versa ) and the band unveiled classic pop song after classic pop song. The likes of Lazy Lover, Sheffield Song, Dung Beetle, Love Has Passed Away and Smile brought a grin to every face and a chorus to everyone's lips. The 'Naturals were always masters at hiding biting and often melancholy lyrics inside catchy, deceptively bouncy guitar-pop and it was great to see they still had the knack. A mid-set highlight was lesser-known album track Idiot, in which James describes himself as "so handsome and intelligent... the world's number one suavest gent" before going on to admit "but of course I'm not, I'm just an idiot, sweetheart..." 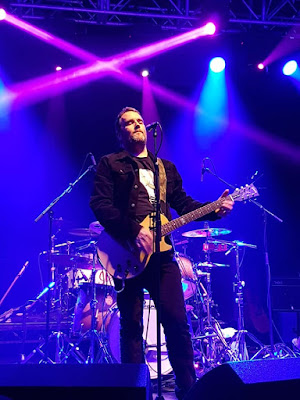 All these songs of wounded masculinity and failed relationships ( which are much funnier than they sound from my descriptions! ) reached their peak with the majestic Day Before Yesterday's Man, with it's unforgettable lines "Jesus, I'm freaking / I've had such a weekend / I think I must be turning to God / My girlfriend has dumped me and headed for the country / With a boy who wears white socks"
-  great stuff! All in all a fine return for a band who, while they may not be as exuberant as they were two decades ago ( who is? ), can still bang out some wonderful songs. Hopefully I'll be able to see them headline again at some point. That'd be nice. And can you play Stammer next time, please? 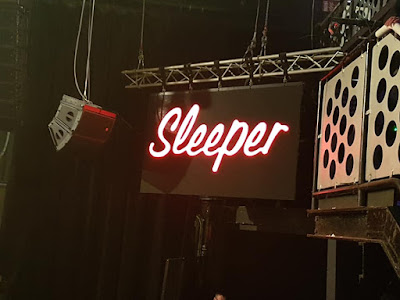 And then, after quite a wait, the headliners came on stage to a mighty roar. I'd always liked Sleeper but wasn't aware of much more than their hit singles, even though I always thought Louise Wener's breathy vocals were one of the signature sounds of the Britpop era. I recently bought their first two albums to try and catch up and found what I'd been missing all that time...

They started with the sugar-rush of Nice Guy Eddie and instantly set the tone for the set  -   ridiculously fun, perfectly played, exciting guitar-based indie, with Louise Wener having a great time, fully in control of the audience, in fine voice and, it has to be said, looking very foxy indeed. Is there a sexier line in 90s music than "I picked up that bra you fancied"? Probably not. I think half the audience were reduced to a quivering heap on the floor at that moment. Ahem! Moving on... 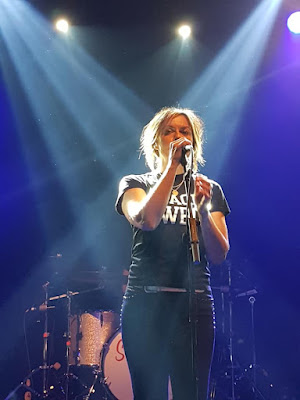 And the next song was Delicious ( "You're delicious / You're so dirty / Make it dirty" ) so, yeah, more of the same. Next up was Paradise Waiting from their new album and you could see straight away that this comeback wasn't just an exercise in nostalgia  -  the new songs effortlessly reach the heights of the old ones. In fact, the title track The Modern Age was easily one of the best moments of the night. Sleeper's songs were often character studies about misfits, pulling back the curtain on suburbia to find the neuroses hidden there, and the new material seems an update on those themes in the age of social media and the general confusion of the 21st century. At one point, Louise mentioned how refreshing it was that Sleeper audiences don't tend to view their gigs through iPhone screens, but try to stay in the moment... "And now I've said that I can see someone filming me..." 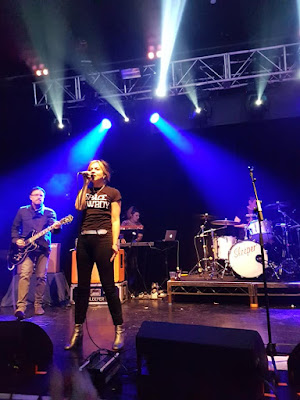 After hitting us with such perfectly-formed, fizzing pop-bombs as What Do I Do Now and Statuesque, Sleeper showed some respect to the lineage of great female-fronted guitar bands by pulling out a fantastic cover of Blondie's Atomic which got everyone dancing, from the old gits like me to the young 'uns in the audience who wouldn't have been born when that track first burst out of New York. Note perfect with drumming from Andy Maclure that would have done Clem Burke proud. It was just sublime.
The set finished with the mighty Inbetweener ( of course ) and then the band came back to thunderous applause to play three more songs, finishing with the punch of Las Vegas and the sardonic Sale Of The Century. The band had clearly had as good a time as the crowd, with Louise telling us a couple of times how they had been unsure about this revival but now realised what a powerful thing this connection between performers and audience could still be. Hopefully they'll stick around now and I definitely need to see them again. I'm officially a Sleeper fan now! It only took 20+ years... 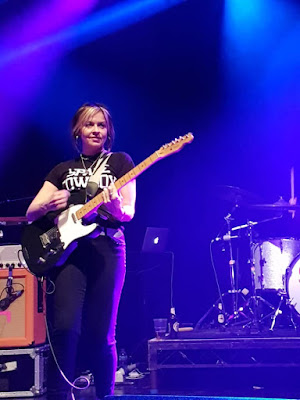 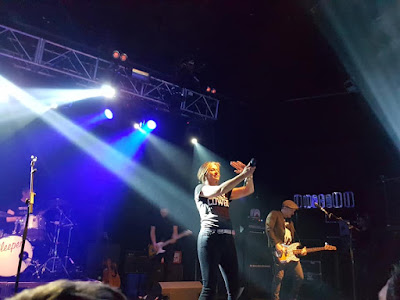 I'd actually dug my old Supernaturals T-shirt out of mothballs for this gig and, as I was heading out of the venue, a guy called Jed Maxwell came up to me and said "I used to have that T-shirt when I was 18! Quality shirt! Will you sell it to me? " Funnily enough, the answer was no. He was obviously upset that I didn't give him the shirt off my back and even tweeted about it the next day :-)
Here's the famous T-shirt: 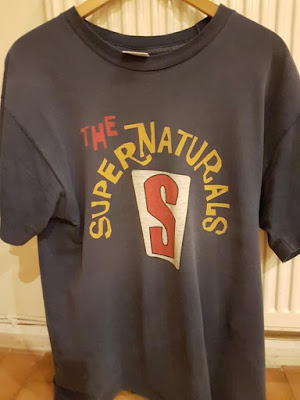 After the gig I met up with Sophie, who'd just finished a shift at the Hippodrome, and we went for a quick drink at Bristol's Harbourside. A lovely end to a wonderful night.

Always had a bit of a thing for Louise off Sleeper, and What Do I Do Now is a great track.

I couldn't agree more, Pete - on both counts.
I'd completely forgotten What Do I Do Now? until I bought Sleeper's "The It Girl" album recently. It's just a wonderful song.