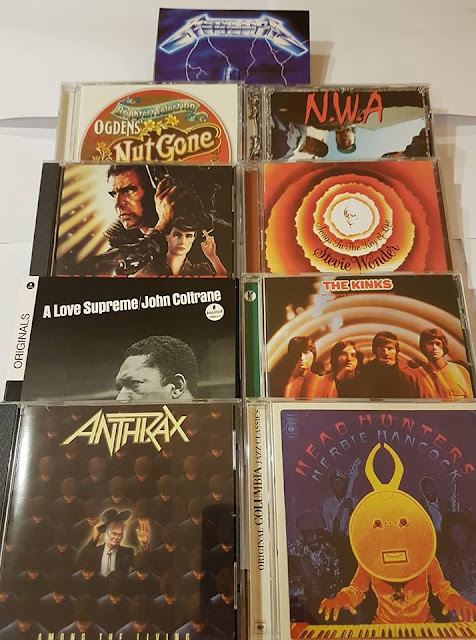 My local HMV, in Gloucester's King's Walk, is on the verge of closing ( originally scheduled to close 19/01 but now delayed by a week ) so I got myself down there for probably the last time yesterday and picked up the musical beauties you can see above. 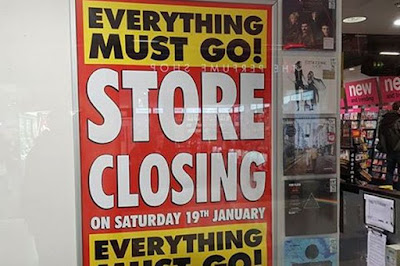 HMV was the last "record shop" standing in Gloucester after the demise of Virgin, Fopp and Our Price ( who remembers them? ) as well as a few indie shops that never lasted long. ( Well, we've still got a CEX but their stock is mostly games and DVDs with only a very few, second-hand CDs. ) It was only a matter of time, of course, with the onslaught from the internet destroying many high street shops over the last decade or so. The HMV chain itself had been in a similarly precarious position about six years ago but was streamlined and pulled through. But now I suspect this may be the last time, to misquote the Rolling Stones.

The closing of this store ( and possibly others, I'm not quite sure ) is a shame for old school collectors of music and movies. Sure, you can buy just about anything on the net, and certainly at a better price, but nothing beats wandering around a record shop, discovering interesting new stuff, spotting old favourites, getting advice from the staff, meeting up with friends... it's an experience that seems to be on the brink of extinction. For my final haul of music I went for a few faves I previously only owned on vinyl ( Metallica, Anthrax, Stevie Wonder... and who ever thought they'd be mentioned in the same breath? ), some albums I've always meant to buy but never got round to ( Small Faces, Kinks, Vangelis, NWA ), and a couple of jazz albums as a kind of mystery purchase ( Herbie Hancock and John Coltrane. ) Certain musical genres like Blues, Jazz and Folk will definitely be hard to find without actual record shops around to feature them. You won't find them in Tesco, that's for sure.

So, farewell then, HMV Gloucester, you'll be missed.

What? Still no Jim Reeves albums amongst your purchases? Go on, show the world that you're an old romantic.

kid, I probably would count myself as a romantic... but the chances of me buying a Jim Reeves album are practically zero. If not sub-zero.

Well, I think it's very brave of you to admit it, Cer. Being an old guy, Jimmy should be right up your musical street. Not buying a Sydney Devine album I could understand, but Jim Reeves? Never mind, maybe when you're 80...

I think we are just waiting for news on the fate of the HMV stores in Glasgow city and East Kilbride the latter I fear may not make it. Pretty sad seeing all the Indies stores going as well but I have to admit my CD purchases have dwindled to about 5 a year from 5 a month back in the day but still pick up DVDs. Some nice choices in that selection.

Thanks Paul. My local HMV is now closed and we're similarly waiting for news on other, nearby stores in Cheltenham, Bristol etc. I know they're only shops but I do feel a part of my past is going with them...