King Creosote at The Thekla 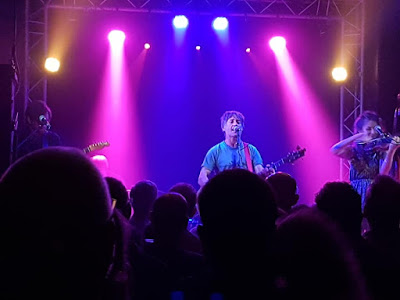 Last Saturday my good friend Tom ( of The Sensitive Bore fame ) kindly gave me a lift down to that there Bristol to hear some folkin' folk music on a boat. Specifically the acclaimed Scottish singer / songwriter Kenny Anderson aka King Creosote at the wonderful Thekla  -  Bristol's premier water-borne venue. I was only vaguely aware of KC previously but I'm always up for hearing something new / different so I was ready for anything...

After navigating the labyrinth of Bristol's new Metro bus system and an unfortunate run-in with a ticket-wielding traffic fascist we got down to business and checked out the support act, Liverpool's Robert Vincent. 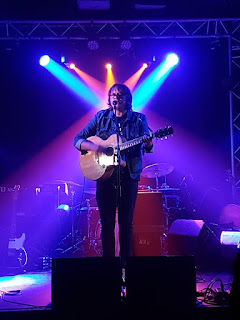 I'm always impressed by anyone who can stand in front of an audience with just a guitar and put on a performance, and Robert Vincent was a great example of this. Although his set got off to a slow start, his melodic Country-tinged songs and rich singing voice soon won over the audience. The title-track from his new album, I'll Make The Most Of My Sins, was probably his best song of the night  -  imagine if you will a Scouse Johnny Cash and you're part of the way there. While never bound for international stardom in this age of auto-tuned, manufactured pop puppets, Vincent is the living embodiment of the old troubadour ideal and it's good to know that there are still artists like him around. 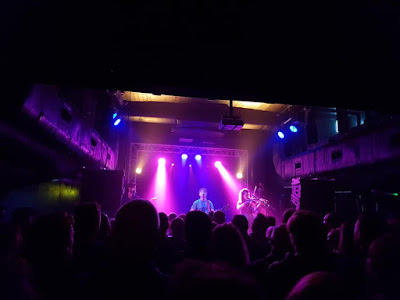 After a break, during which Tom and I headed up to the Thekla's top deck for a drink, a chat and a quick battle with marauding pirates, the main man came out onto the stage. I hadn't been sure what to expect from King Creosote  -  maybe he would have gone the one-man-plus-guitar route of Robert Vincent  -  but he actually brought a full band with him. As well as Kenny himself on acoustic guitar, the sound was filled out by electric guitar, violin, keyboards, double-bass and drums. Quite a squeeze for the Thekla's not overly-roomy stage!

The full band line-up meant that there was more of a variety of sound to this set than the support act, from some quieter, more ethereal songs to some full-on folk-groove pounders with an almost Velvet Underground-goes-acoustic kind of hypnotic repetition. And what a voice the man has! Often fragile, occasionally strident, now and then rising to a falsetto, but always with the Fife accent shining through, Kenny Anderson's voice is a beautiful instrument in itself. The songs were obviously unfamiliar to me but I soon cottoned on to the themes of love, loss, failure, joy and the earthy, wind-blown imagery. If all this sounds too pretentious ( it really wasn't! ) then I just have to mention that Kenny was a warm and funny presence on stage  -  asking us if Bristol was a "sex town" ( because his band come from north of Hadrian's Wall and don't know anything about that stuff, apparently ) and regaling us with the tale of their last gig ( the Purbeck Folk Festival ) where they died a death and suspected the organisers had wanted King Crimson, not King Creosote. Somebody in the crowd shouted out "We love you Kenny!" and I think the feeling was mutual. All too soon, the set was over but I'm sure everyone there came away with a smile on their face. I certainly did. I'll definitely have to check out some of King Creosote's forty plus (!) albums.

Tom and I went in to Bristol for a couple of drinks in dingy rock 'n' roll boozer The Hatchet and also in a more mainstream pub on the Harbourside. Strangely enough there was a folk band playing in the latter, but one of a more Pogues-like persuasion. They were very energetic and could certainly play their instruments but the Punk-folk version of Pulp's Common People was a mash-up too far and when they started playing pirate drinking songs it was time to go...
So, a cracking gig and great to catch up with Tom! Let's do it again soon!

I just had to respond to this post!
I am a good friend of Pete Doree whose blog The Bronze Age Of Blogs I've seen you follow.

Well,in conversation with Pete it turns out you live in my home town of Gloucester. Not only that,but you're a big comic/music fan like me and then I find we were feet away from each other at the Thekla watching King Creosote!!

I hope you had a great time at the recent NICE Con in Bedford, and maybe one day our paths will cross :)

Thanks for the comment David. As Steven Wright once said "It's a small world... but I wouldn't want to paint it."
Yep, I'm in Gloucester. The mean streets of Quedgeley to be precise :-)

What did you think of the King Creosote gig? I really enjoyed it! It was a bit of a change from the louder kind of bands that I normally go to see, but it's always great to find something new. Do you go to many gigs yourself? Ever go to the Glos Guildhall?

NICE was great fun and it was a pleasure to meet up with Pete after following his blog for many years. And I hear you're also one of The Kids From Rec Road? Awesome!

Yeah, maybe we could catch up some time, maybe at a local gig? Until then, don't be a stranger... be a Follower! This blog needs a few more :-)

I loved the King Creosote concert, but sadly had to leave early to catch my train home. I've been a fan for some years since my wife introduced me to his collaboration album with Karine Polwart and others from the indie folk scene called The Burns Unit (definitely worth a listen)
I attend plays at The Guildhall as I'm a part-time actor with Small Spaces Theatre Company as well as a writer with Gloucester Scriptorium and plays are more my scene, but I appreciate I've missed some great talent there in the past.

Take care now and I promise to drop into your blog from time to time :)