The Skids at the Bristol Bierkeller 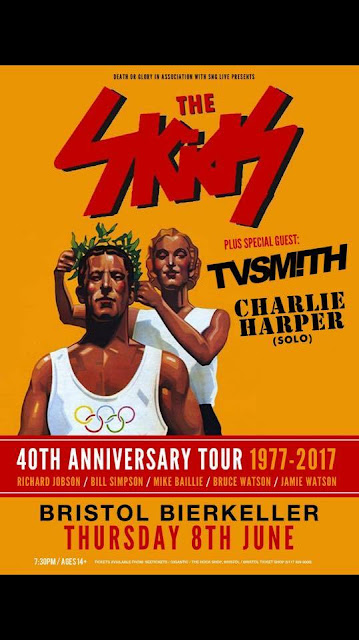 Things have been very quiet on the blogging front here at TGW-S recently for no real reason, so I thought I'd better try and catch up with a few recent events. First off  -  a truly fantastic gig by long-lost Punk heroes The Skids. I've been going to see bands since I was 14 years old, way back in the dark days of 1981, and I estimate in that time I've seen around 200 bands ( some multiple times ) but I have to say that this gig was truly, genuinely one of the best I've ever seen.
The Skids were one of the first Punk / New Wave bands I really got into, even though by the time this happened they were pretty much over  -  typical for me! They were quite a unique proposition at the time  -  a very young group of musicians from Dunfermline who played a very different, art-rock version of Punk. No three-chord thrashes here, but a multi-layered strangeness built on Stuart Adamson's unique guitar sound and Richard ( Jobbo ) Jobson's cryptic, poetic lyrics. I bought the band's first three albums ( Scared To Dance, Days In Europa and The Absolute Game ) on second-hand vinyl and played them to death but The Skids had already split up. Jobbo, ever the aesthete, tried his hand at poetry, TV presenting, film directing and even had another shot at rock 'n' roll success with the short-lived Armoury Show. Adamson, however, founded Big Country who went on to briefly become one of the, er, biggest bands of the '80s with their epic, windswept Celtic rock. Tragically, Adamson committed suicide in 2001, another great musician sadly lost to alcoholism.
After all this I never expected to see The Skids live  -  they became just another lost band, their records remembered by the faithful few, occasionally popping up on repeats of Top Of The Pops on BBC 4. But then... it was the band's 40th anniversary ( this year! ) and, amazingly, a new tour was announced. I had to be there! I snapped up tickets for myself and my mate Glenn and we headed down to Bristol's dingy Bierkeller for one incredible gig... 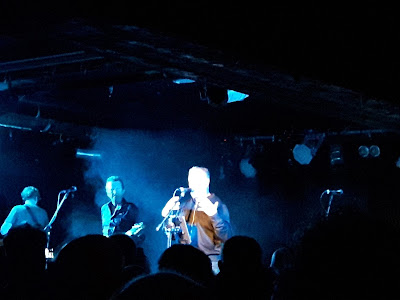 ( Apologies for the blurred photo  -  believe it or not, this was the best one I got! I've been suffering with sciatica lately so didn't want to get too close to the front and get caught in the crush. This goes against the grain for me but, for once, I was sensible and kept out of harm's way. )
We missed Charlie Harper's solo set ( not too upset... I've seen Charlie loads of times with the UK Subs ) but did manage to catch the legendary Tim"TV"Smith, former livewire leader of The Adverts. Tim was on top form, bashing away at his acoustic guitar as if his life depended on it, and singing his increasingly political anthems... on the eve of the disastrous General Election. He finished with some crowd-pleasing Adverts songs ( Gary Gilmore's Eyes, One Chord Wonders ) and then it was time for the main event. 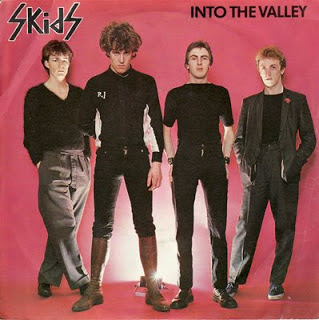 Bounding out onto the stage ( well, Jobbo did ) The Skids plunged into first song Animation and the crowd, as they say, went wild. This track from Days In Europa set out the band's stall from the first minute: obscure lyrics wedded to massive, terrace-friendly tunes, plenty of "Whoa whoas" to sing along to, Jobbo's commanding stage presence and an absolutely note-perfect take on the original Skids sound. They then jumped straight into the stop-start lunacy of first-album cut Of One Skin  -  Glenn and I gave each other a look  -  a "this is going to be awesome" look, and it was. The band were clearly loving this as much as the audience. At one point Jobson confided that he'd been unsure about this reunion tour, wondering if The Skids were still wanted. I think he got his answer in Bristol. The cheers that greeted each song nearly blew the roof off the place as the band pulled classic anthem after classic anthem out of the bag. Circus Games, Out Of Town and Masquerade ( Jobbo's fave Skids song apparently ) were Punk / art / rock Godzillas, crushing all before them, and the segue from Melancholy Soldiers to Working For The Yankee Dollar was sublime and inspired. The avuncular and self-deprecating Jobson regaled us with a few tales from the old days ( like how he auditioned for the band and got the gig by telling the other applicants to "get tae fuck" ) and dedicated the beautiful Scared To Dance to his lost comrade, Stuart Adamson. This, coupled with a stunning version of A Woman In Winter, brought a tear to this hardened gigger's eye. Although no-one could truly replace Stuart Adamson, his compatriot from Big Country, Bruce Watson, did a sterling job in recreating Adamson's  guitar sound, aided by his guitar-playing son Jamie Watson. Along with Skids stalwarts Bill Simpson and Mike Baillie they played with power, energy and subtlety, as though this band had been touring for years. And Jobbo was a legend! Constantly involving the audience, telling tales, cracking jokes, twirling and shadow-boxing around the stage like a man half his age, and booming out that still mighty voice, he was a delight to watch. I had a stupid grin plastered to my face for the entire set  -  just like the front man.
All too soon the gig came to a close with the inevitable TV Stars ( updated to include the names of Tory and UKip MPs  -  who didn't come off too well... ) and closing anthems ( there's that word again ) Into The Valley and Charade, with a final treat  -  a fine new song called World On Fire from their upcoming new ( NEW! ) album. What a fantastic gig! I think the real reason I loved it so much ( as I remarked to another blogger recently ) was that here was an absolutely cracking band playing beloved songs which I never, ever, thought I'd get to see played live.
World On Fire? Band On Fire!

I always remember an outrageous Skids joke on "Never Mind The Buzzcocks"! -
....After the Skids, Richard Jobson went on to present consumer affairs programmes. Whilst Stuart Adamson went on to be a Big Country member.
....Yes, we certainly do remember!

Okay John, you'll have to tell us that ...Buzzcocks joke now :-)