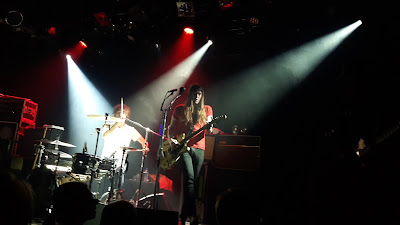 A strong contender for Gig Of 2016 ( if not Gig Of The Decade ) was my trip last May to see the Dandy Warhols in the beautiful city of Amsterdam. This jaunt into pre-Brexit Europe was the brainchild of my great friend Glenn, World's No. 1 Dandy's Fan, whose motto is "If you can, you should". So, with those words ringing in our ears and legendary Borrowed Time vocalist Rob F in tow, we hopped on a KLM flight and headed for the Netherlands for an amazing long weekend. I will have to post separately about Amsterdam  -  what a stunning city!  -  but, for now, I'll just concentrate on the gig itself. 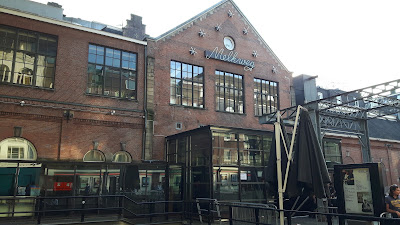 The venue was Der Melkweg, a former milk factory (!) which is now an arts space that plays host to gigs, clubs and exhibitions  -  in fact there was a really cool photographic exhibition on when we were there devoted to legends of Hip Hop. Just around the corner from Leidseplein, a vibrant square in the heart of the city, Der Melkweg puts many UK toilet-circuit venues to shame. Glenn and I stopped at Leidesplein before the gig and had a drink with ex-pat Brit and Facebook friend Paul W... and ran into the lovely Zia from the Dandy's. Here are Zia, Paul and myself posing for a photo op: 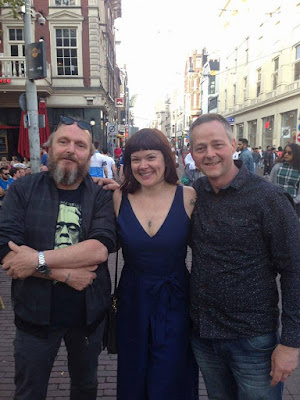 And later, just before the gig, I ran into Zia again ( I wasn't stalking her, honest! ) and took this great photo: 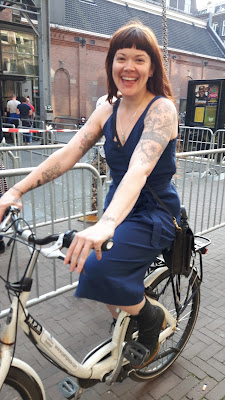 ( I was really pleased with this one )
After all this socialising had set us up nicely we thought we'd better get to the actual gig. Rob didn't come to this because he went to some Anarchist Punk festival instead ( of course! ), so Glenn and I joined crowds of mega-cool Dutch Dandy's fans and filed into the venue. 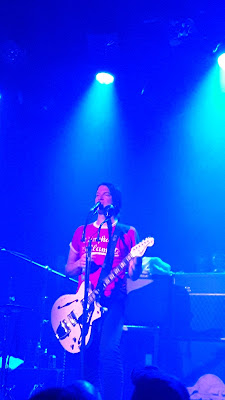 The band were on sparkling form, definitely an improvement on the last time I'd seen them at the Anson Rooms in Bristol, where they'd been okay but a bit lackluster. This time, probably helped by the fact that this was my first gig outside of the UK ( and my first trip outside the UK in 9 years ), proved to be one of the best gigs in recent years.They played all the old faves  -  Not If You Were The Last Junkie On Earth, Get Off, the awesome Godless, Every Day Should Be A Holiday ( by a solo Courtney, above ) and, of course, Bohemian Like You. The new songs from the latest album, Distortland, which seem so basic and unfinished on record were allowed to breathe a bit when played live and became deeper and fuller  -  with even as simple a tune as Pope Reverend Jim becoming something of a groove monster, and the repetitive earworm STYGGO causing mass sing-alongs. By the time they had finished with the inevitable Boys Better / Pete International Airport we were one very happy multinational audience. And bollocks to UKip! 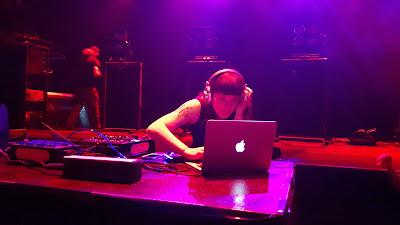 After the gig Zia did her aftershow party / DJ Rescue thing and we had insane amounts of fun, dancing to old Indie, Soul and Ska. I danced with Zia ( again! ) which I haven't done since the Camden Barfly a few years ago and I snapped Glenn and Zia on the dancefloor... 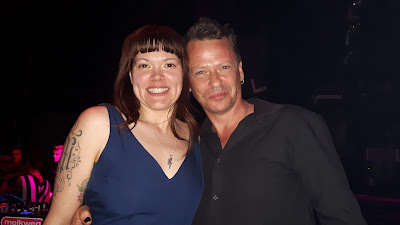 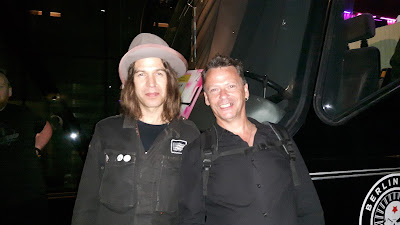 So that was just one of the highlights of our Amsterdam trip. More to come... and Rob may even put in an appearance in the next post :-)
Posted by cerebus660 at 23:10

Hello, just passing through whilst web surfing today. I lived in Amsterdam for some years, next to Leidseplein and the Melkweg, in fact, so was interested in your review. Really liked the enthusiasm you expressed. I think you really should write up about Amsterdam and your thoughts on it. I understand you were only there for the weekend but after reading through some of your other posts on your blog, I trust your judgement! Post-Brexit, of course, would add a certain validity if not importance to any piece you write about Amsterdam. I'm curious also about that Anarchist Punk event your friend went to?

Hi John! Thanks for the comment - I'm glad you stopped by while you were passing through :-)
Yes, I really fell in love with Amsterdam over that long weekend and will definitely post more photos soon. I'm actually off to Barcelona next weekend to see the Dandy's again so it will be interesting to compare the two experiences. The whole, ridiculous Brexit situation certainly casts a long shadow over any Europe-related posts...

I'm not really sure what the Anarchist event was all about, although I think it was some kind of anti-fascist benefit. It's more Rob's thing than mine, really, although I did used to listen to a bit of Anarcho-Punk in the 80s - in fact Crass were one of the first bands I ever saw, back in ( gulp! ) 1981. Check out my posts labelled Favourite Gig Fridays for a review of that gig.

I've just checked out your blogs - very interesting. I'm now an official Follower of The Art of Exmouth. I'll have to leave you a few comments...

John, I've just looked at that Crass post and realised you've already commented there! I'm a bit slow on the uptake sometimes :-)